The video shows a person surfing online through a screen projected onto their forearm. It garnered more than 45,000 views on Facebook before it was deleted. The post linked to a website advertising the bracelet for S$75 (56 USD) that can still be found here.

“Use projection technology to turn your arm directly into a mobile phone,” the caption reads. “Only 300 pieces of internal beta version S$75”.

The same “Cicret bracelet” was advertised on Facebook in Malaysia for RM220 (US$55) here and here.

Similar videos have circulated widely online since at least 2015, for example on Facebook here and here; and on Instagram here, often with the same claim that the product is available for sale in locations including Pakistan.

The claim is false. The purported product never made it to market. The company that advertised it has been struck off the registry of commerce and companies in France, an investigation by AFP found. 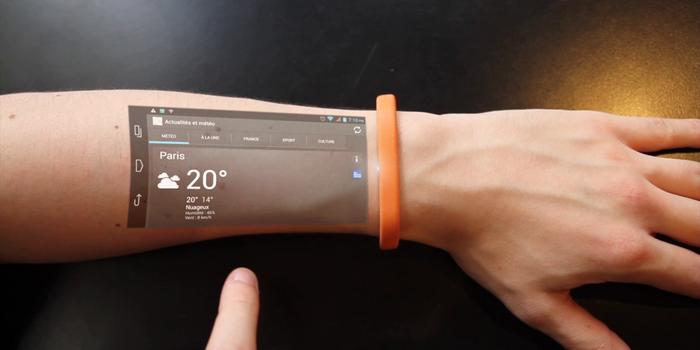 The video is titled: “The Cicret Bracelet (Concept video)”.Part of its description states: “With the Cicret Bracelet, you can make your skin your new touchscreen. Read your mails, play your favorite games, answer your calls, check the weather, find your way…Do whatever you want on your arm. More infos: www.cicret.com.”

No new videos, however, have been uploaded to the channel for at least four years.

Fact-checking organisation Snopes found in a 2015 debunk that the “concept video” featured mock-up images and not a real-life depiction of the bracelet. Online users have posted tutorials on how to create similar visual effects.

A search for the website for the product (cicret.com) and its parent company (cn2p.eu) led to archived pages instead here and here. Cicret’s other social media accounts such as Twitter and Facebook, have not been active since 2016.

This record on Infogreffe, a website which holds information about companies entered on the Trade and Companies Register, shows the company was struck off the register in August 2020.

On YouTube, there are multiple videos from consumers who claimed they tried to buy the product, but that it never arrived. The videos can be seen here, here and here.

Tags:  how to turn on a smart bracelet