A study looking at 646 wildlife deaths on railway tracks in Banff and Yoho national parks in Alberta and British Columbia has found that train speed was one of the biggest factors.

The research, published earlier this week in Nature’s Scientific Reports, studied animals killed by trains between 1995 and 2018: 59 bears; 27 wolves, coyotes, cougars and lynx; and 560 deer, elk, moose and sheep.

“Next was distance to water, then the (amount of) water near the site and then curvature in the tracks.”

Tweet ThisClick to share quote on Twitter: "Next was distance to water, then the (amount of) water near the site and then curvature in the tracks."

Train speed and track curvature, she said, make it difficult for wildlife to detect trains, while being close to water — particularly a lot of water — hinders their ability to get off the tracks before being hit.

The study builds on a five-year research project funded by Parks Canada and Canadian Pacific Railway from 2010 to 2015 that focused on grizzly bears being struck by trains in the same two parks. It concluded that giving grizzlies better travel paths and sightlines along the railway was the best way to keep them safe.

Cassady St. Clair said she hopes the latest study “will make it possible to identify types and locations for mitigations that will reduce the problems for all wildlife, not just grizzly bears.”

The research concludes effective mitigation could address train speed and the ability of wildlife to see trains, especially at curves in tracks near water.

Canadian Pacific noted in a statement Friday that the company has worked with Parks Canada for the last decade to learn more about how wildlife interacts with the railway.

“CP has engaged with Parks Canada and the University of Alberta throughout this program to ensure the mitigation measures CP implemented were based on science,” it said. 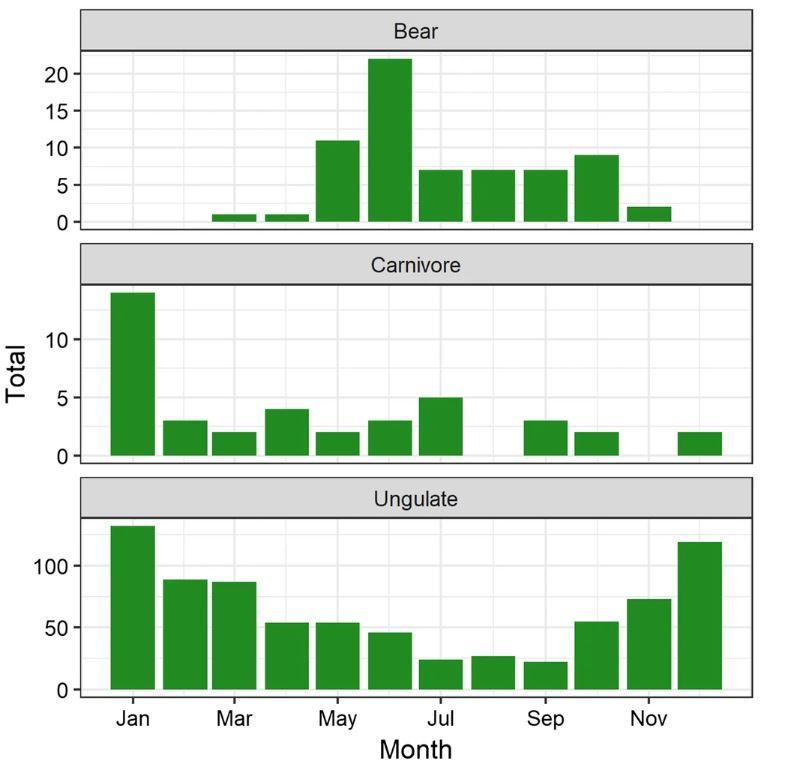 The statement didn’t address whether the company would consider reducing train speeds.

Co-author Jesse Whittington, a wildlife ecologist for Banff National Park, said trains are one of the leading causes of death for animals in the two parks.

“The trains (that) travel through Banff and Yoho national parks kill almost 30 animals a year,” said Whittington, who added that animals use rail lines for travel and access to food.

The latest study, he said, helps Parks Canada understand where wildlife are getting killed, why they are getting hit in that location and the time of year when they are most likely to get hit.

“Trains can be surprisingly quiet when they are travelling downhill or coming around a corner.”

Whittington gave as an example an adult female grizzly bear killed by a train in September. She was in an area with a steep slope next to the Bow River.

“There were few places for her to get off the tracks.”

“When we have deep snows, we’ll often find elk and deer along the tracks.”

Whittington said some of his Parks Canada colleagues have been working to enhance travel routes for animals away from the rail line by creating more trails through the forest. The agency’s fire crews have also been working to create better wildlife habitat throughout the park with prescribed fires.

“We have a lot of thick shrubs and deadfall that has accumulated over the years that makes it difficult for animals to travel across the landscape,” he said. “To date, we’ve cleared over 50 kilometres of wildlife trails throughout Banff — both in areas around these hot spots and in other areas that are pinch points.

“We’re hopeful that will help.”

Tags:  how to change time on yoho smart bracelet