Hot on the heels of the Realme Pad come some renders of the upcoming Realme Band 2. However, while the images of the aforementioned tablet show a rather generic-looking device, the pictures of the Realme Band 2 reveal a wearable that has had a complete design overhaul compared to the first-gen model. The renders, shared by @OnLeaks and Digit, are accompanied by a 360° video that shows the Realme Band 2 fitness tracker in all its glory. 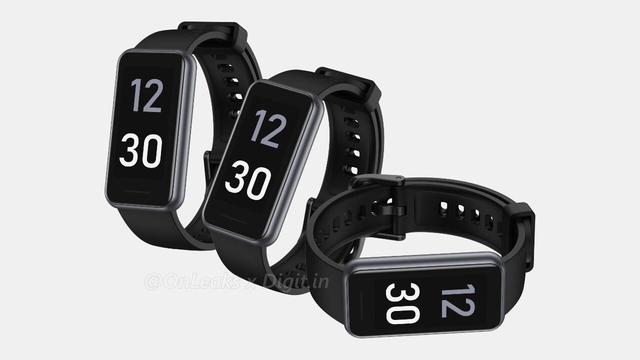 It’s an aesthetically pleasing device, and if Realme fits it with the expected functions and prices it aggressively, it could certainly snatch some market share away from the mighty Mi Band range from Xiaomi. The Realme Band 2 apparently has a 1.4-inch display, which is a big upgrade from the 0.96-inch display of the predecessor. In fact, where the Realme Band looked like a cheap and cheerful smart bracelet, the Realme Band 2 resembles a more premium smartwatch.

The Realme Band 2’s dimensions have also been shared: 45.9 x 24.6 x 12.1 mm. It has been speculated that charging the wearable will be via pogo pins on the rear rather than the system used by the first-gen Realme Band, which involved detaching a strap for USB charging. Optical sensors can also be seen, with 24/7 heart-rate monitoring likely onboard and hopefully blood-pressure monitoring and SpO2 level measurement included too.

Bluetooth 5.1 is supported, which is another step up from the original Realme Band that offered Bluetooth 4.2 connectivity. It seems like Realme has taken a page out of the Apple Watch design book rather than copy the Xiaomi Mi Band, with the Realme Band 2 looking like a hybrid device that combines the svelte build of a smart bracelet with the classic appeal of a smartwatch.

Tags:  how to turn on a smart bracelet