Have you been looking for a cheaper, slower, less accurate, and less attractive Apple Watch knockoff? Good news if you have, because Mobvoi’s TicWatch GTH will suit you perfectly. It’s just $80 and looks quite a bit like Apple’s smartwatch, but that’s where the similarities end. If for some reason you aren’t just going to buy one of the many very good fitness bands available for less, or one of the far better smartwatches for just a little more, let’s talk about where the TicWatch GTH gets it all wrong in more detail.

What is there to say? The TicWatch GTH unashamedly copies the Apple Watch’s familiar shape. It’s a little smaller overall, with a 10mm thick case, and it only comes in a dull black. The crown is set in the same place as the Digital Crown on the Apple Watch, something even Oppo avoided on the Apple Watch-alike Oppo Watch, but here it’s a simple button. The 20mm strap is made from TPU and attached using quick release pins. The case is apparently made from metal, but it does a great job of feeling like plastic.

It’s not very comfortable to wear. I found the plastic case soon gets hot and itchy even when not doing any exercise, the strap slips around my wrist unless it’s cinched so tightly I cut off circulation, and the keeper refuses to stay in place meaning the end of the strap flaps around under your cuff. Things don’t get any better when the 1.55-inch, 360 x 320-pixel screen lights up, because that exposes the massive bezel around it.

Positives? The glass over the screen does have a pleasing 2.5D curve which makes swiping easy, and the case is swim-proof with 5ATM water resistance. That’s really about it. What bothers me most about the TicWatch GTH isn’t that it’s a cheap imitation of the Apple Watch, or that it’s not very nice to wear. It’s that it’s a more expensive version of the humdrum Willful Smart Watch I tried recently, which costs $36 from Amazon, yet isn’t any better in terms of design or comfort. In fact, in some ways, it’s worse.

The TicWatch GTH is stuffed with sensors — its only real redeeming feature — at least when taken at face value. They monitor your heart rate, blood oxygen levels, and unusually, skin temperature too. The skin temperature monitor is definitely something we don’t see often on wearables. It’s activated either in the TicHealth suite of apps on the watch or, along with heart rate and blood oxygen, can be monitored automatically throughout the day.

The question is, why would you need to know your skin temperature? The temperature of the body’s largest organ is different from your internal temperature, which when measured with a thermometer will inform you of a fever. However, while skin temperature can show you changes in temperature, it could be due to anything from environmental to dietary reasons. It joins SpO2 blood oxygen readings and respiratory rates as health data that’s provided on the TicWatch GTH but not adequately explained by Mobvoi.

If you’re going to fill the watch with sensors and, crucially, price it for everyone Mobvoi, make the effort to explain why we need to know all this, please. A card shown on the watch collates all the sensor data, ready to inform or worry you, depending on how you view this sort of information, and a vaguely descriptive sentence on the function itself doesn’t count. I couldn’t test the accuracy of the skin temperature monitor, but it never alerted me that I was either too hot or too cold, so I assume I’m fine and that it operates normally. The heart rate sensor and blood oxygen sensor returned almost identical results as the Apple Watch Series 6.

Workouts are tracked on the watch and there is a selection of options, including running, swimming, yoga, and mountain climbing. Comparing it to the Apple Watch during a 30-minute workout saw the TicWatch GTH record a slightly lower heart rate throughout, and substantially fewer calories — approximately half — burned in the final report. A software update may address accuracy in the future, but for now, the workout data may not represent how hard you actually work. There’s no GPS on board, so this isn’t a tracker for serious athletes or sportspeople.

Another important note. Mobvoi has taken a step back from linking the GTH’s sensors with COVID-19 detection, which was hinted at in the early press materials. However, on the product page, the company does indicate it’s working with Carnegie Mellon University on a system that uses the GTH’s sensors as a way of detecting the disease in its early stages. Based on its workout tracking accuracy and lack of explanation on how the sensors work now, I won’t be entrusting my ongoing health to the GTH any time soon. 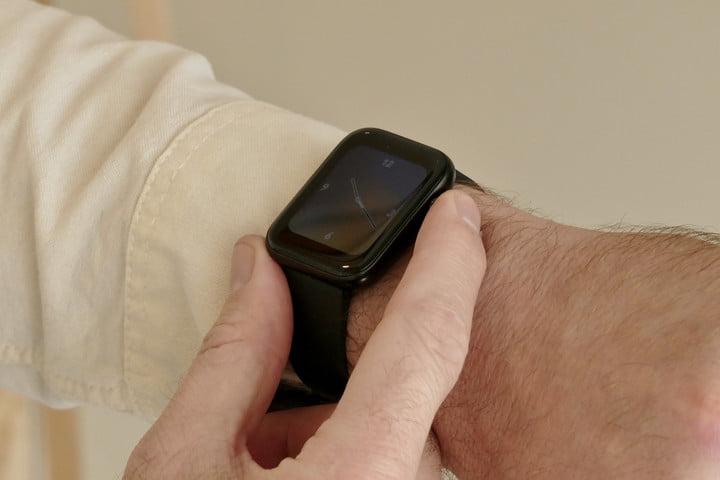 You use the Mobvoi app to link the watch to your phone. It also collates all your workout data and shows a dashboard with data taken from the watch’s sensors. The watch uses Mobvoi’s own software, which is reminiscent of the system used on some early Amazfit wearables, in that the menu is a vertically scrolling list, and there are “cards” with information like the weather and workout details on the left and right of the main screen.

While the speed is adequate, the software looks and feels outdated. A good example is when you change the watch face, an action performed in the app, as it takes an agonizing 2 minutes, 2 seconds to transfer and apply a new face to the watch. I know, because I timed it. The first Amazfit smartwatches I used had a similarly lengthy wait, but this has since changed. Mobvoi is obviously happy being totally behind the times.

Wearing and using the TicWatch GTH is often frustrating, and not very rewarding

Notifications are accompanied by a weak vibration alert, and not all apps are supported. Outlook and Teams are missing from the list, despite being installed on my phone, for example. Information displayed varies from showing most of the text, to nothing outside of having a message waiting. You can’t interact with any notifications.

The watch doesn’t have an ambient time display, and you have to push the button to wake the screen up as there’s no screen-tap option. The raise-to-wake feature works but is quite slow to respond. Even though the screen has a decent pixel density, the quality of text and images varies. Notifications look much more pixelated than other menus, for example, making the operating system look unfinished.

Bluetooth range is quite short too, and the watch frequently disconnected from my phone, and wouldn’t always reconnect without me going into the app and forcing it to do so. Wearing and using the TicWatch GTH is often frustrating, and not very rewarding, a situation that’s not helped by software that feels outdated compared to the competition.

The TicWatch GTH has a 260mAh battery which Mobvoi says will last for 10 days before needing a recharge. This seems to be accurate, but an irritating bug makes assessing battery life difficult. The battery indicator on the watch constantly shows a full charge, while in the app it remains about three-quarters full. Not helpful, and neither include a percentage meter, so it’s impossible to judge when you need to think about recharging until the battery has almost expired.

You can purchase the TicWatch GTH now for $80 or 70 British pounds. It’s available directly through Mobvoi’s own website or Amazon.

The TicWatch GTH makes me angry. I like the addition of the temperature sensor on top of the heart rate and blood oxygen monitor. It potentially helps us better assess our overall health, and it’s great to see it in an affordable wearable. Except, its inclusion here is executed so badly here the value has been lost.

Mobvoi doesn’t adequately explain why we should use or trust these sensors, or how to best interpret the results, and after comparing the GTH with another smartwatch, there are concerns over accuracy in some areas. It doesn’t inspire much confidence or encourage me to wear the watch all the time. Not that I’d want to wear it all the time. The derivative design is an instant turn-off, the bezels around the screen make it look even cheaper than it actually is, and the strap is uncomfortable so I don’t want to wear it overnight for sleep tracking.

Almost regardless of how much you want to spend there are dozens of wearables vying for your attention, and almost all of them are better buys than the TicWatch GTH. That it comes from the same company behind the TicWatch Pro 3 smartwatch, one of our top recommendations, is as baffling as it is frustrating.

Yes, a lot. If you want a simple, reliable fitness tracker the Honor Band 6 and Xiaomi Mi Band 6 cost less and perform better. The $60 Samsung Galaxy Fit 2 may be getting a little old, but it’s more comfortable and better looking. Happy to spend more? Take your pick from our best fitness tracker list.

If you want a smartwatch we recommend spending a little more and getting the $130 Amazfit GTS 2e, which has a far more attractive design and better software. That’s if you want to spend the minimum. If you own an iPhone buy an Apple Watch — the Apple Watch SE is fine — and if you own an Android phone, Samsung’s wearables are very good too. Samsung itself only charges $180 for the Galaxy Watch Active 2 at the moment, so there are deals to be had.

The TicWatch GTH may be cheap, but the savings you might get from the purchase will not result in a satisfying ownership experience.

The water-resistance and durable metal case mean the TicWatch GTH should withstand some harsh treatment, and the strap is easily replaced if it breaks. The software is in need of refinement now, but no updates have arrived during my time with the watch. If you decide to buy one and can live with the software potentially staying the same as it is now, it should remain technically relevant for a couple of years given the comprehensive sensor array.

No. The derivative design, accuracy concerns, and frustrating software put it far behind the competition regardless of cost.

Tags:  how to use willful fitness tracker