How To Power a FitBit On or Off [Versa, Inspire, Ionic, etc]

Your Fitbit’s battery life can range anywhere from a week to 10 days, provided the GPS feature is not on all the time. So, people who make the most of this activity tracker and use it often might need to charge it more frequently. But a great way to preserve the Fitbit’s battery is to power it off when not in use.

However, Fitbit wearables are available in several different models, and not all of them are powered on or off the same way. Plus, some Fitbits cannot be turned off at all.

If you’re thinking about buying a Fitbit tracker, it’s crucial to know if and how you can power it off. Here are some tips on getting the most out of your Fitbit by powering it down when not in use.

How to Power On or Off a Fitbit Versa

If you own or plan to purchase the Fitbit Versa model, you’re in luck, as this tracker can be powered off. That applies to all three generations of this Fitbit bracelet.

However, if you have Fitbit Versa 1 and 2, powering on will be slightly different than it is with Versa 3. In either case, the process is simple and requires only a few steps.

To power the Fitbit Versa 1 and 2 back on, all you need to do is press the back button once.

However, to power on the Fitbit Versa 3, you need to press and hold the button until the tracker starts to vibrate.

In both instances, once the Fitbit logo appears on the screen, your watch is powered on.

How to Power On or Off a Fitbit Inspire

The Fitbit Inspire is among the wearable models’ users can’t turn off at all. All you can do is reboot it during which time it will only briefly turn off and then turn on again.

Otherwise, it will only power off once its battery runs out. If you need to reboot your Fitbit Inspire, here’s how to do it: 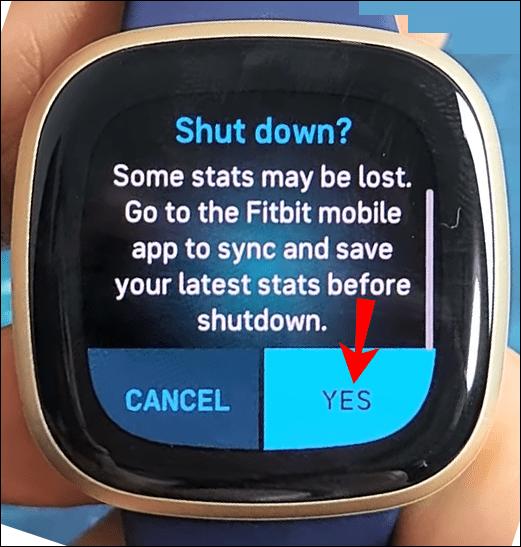 Once your Inspire watch starts to vibrate, it has officially rebooted.

How to Power On or Off a Fitbit Charge

The Fitbit Charge is one of the company’s most popular models and has had several upgrades over the years. The device is water-resistant, has excellent battery life, and features a cool design.

Sadly, it doesn’t allow users to power it off. Like the Fitbit Inspire, all you can really do is temporarily reboot it if you’re having technical issues. Here’s how:

The tracker has been successfully rebooted when the watch starts to vibrate, and a smiley icon appears on display.

How to Power On or Off a Fitbit Ionic?

The Fitbit Ionic model is a bonafide smartwatch with an integrated GPS, excellent music storage, and dynamic personal coaching.

As one of the top-tier Fitbit trackers, it can be powered off and subsequently powered on. It requires only a few quick taps. Here’s how to do it:

Your Fitbit Ionic will automatically power off. To power it on, press the back button once and give it a few moments to entirely power on.

How to Power On or Off a Fitbit Surge

The Fitbit Surge has a secure and comfortable fit and can track many activities, including yoga, hiking, and weightlifting.

It’s a super-reliable fitness tracker that you can, fortunately, power off when necessary. To do so, follow these steps:

That’s all there is to it. To power the Fitbit Surge on, press any button on the device.

How to Power On or Off a Fitbit Blaze

Another top-tier activity tracker from Fitbit is Blaze. It has a large touchscreen display, sleep tracking, and fantastic battery life.

It also has more than one button for more control when it comes to notifications and music. If you have a Fitbit Blaze, you can power it off whenever you choose. Here are the steps to take:

When it’s time to power up your Fitbit Blaze, press any button on the watch and give it a few moments.

Important: When your Fitbit is powered off, it will likely show the incorrect time when it’s powered back on. It doesn’t matter whether it’s powered off because the battery ran out or you’ve powered it off.

Managing Your Fitbit Tracker the Way You Want

Even though fitness trackers have features that can let them replace a traditional watch. They can tell time but they’re much more than that. The analog watch can’t be powered off, and the digital watches aren’t meant to be.

Activity trackers, such as Fitbit, can be full-time wearables, or you can use them only when necessary. In the meantime, you can power them off and preserve the battery.

The bad news is that not all Fitbit devices can be powered off, but many can. Alternately, you can reboot your Fitbit from time to time to make sure it’s always synced with the app.

Which Fitbit tracker do you use? Let us know in the comments section below.

Tags:  how do i reset my fitness tracker