How to choose a fitness tracker

Picking a fitness tracker is a deeply personal choice. Unlike most gadgets, you’re meant to wear these all the time. And while many of us share similar health goals, our bodies and needs are highly individualized. The fitness tracker that everyone else raves about may not work for you and vice versa.

That’s what makes buying a fitness tracker tricky. But don’t worry. Here are a few things to consider when you’re deciding which tracker to buy.

Find your “why” and go from there

Fitness instructors love to bang on about “finding your why,” but it’s also the first thing you should ask yourself when buying a tracker. Why do you want a fitness tracker to begin with? To lose weight? Train for a marathon? Improve your sleeping habits? Fitness trackers are a motivational tool, but they can’t help if you’re unclear about your goals.

Once you’ve got your why, it’s easier to figure out what specs and features you should prioritize. For example, say your big why is to train for a marathon. Regardless of skill level, that means you’re going to need something that can track GPS distance, monitor heart rate, and comes with long battery life. But if your ultimate goal is to improve your sleep, you may not need a tracker with built-in GPS at all. You’ll want long battery life, perhaps a SpO2 sensor, and a tracker that’s capable of providing detailed sleep insights.

Spec sheets and fitness buzzwords can be overwhelming. But no matter what fancy marketing a company might use, they all boil down to the same basic sensors and metrics.

First off, all fitness trackers have a combination of accelerometers and gyroscopes to detect motion. Some will add altimeters and barometers to measure elevation or how many stairs you’ve climbed in a day.

For health tracking, nearly all modern trackers have a photoplethysmography (PPG) sensor. These are green LEDs that shine light through your skin to measure heart rate. There are also an increasing number of trackers that include red LEDs or SpO2 sensors to measure blood oxygen levels.

More advanced or specialized trackers will include a few extra sensors. For instance, if you see a tracker has EKG capabilities, that means it has an electrode. Meanwhile, Samsung’s Galaxy Watch 4 has a 3-in-1 sensor that measures heart rate, enables EKGs, and analyzes body composition. The Fitbit Sense also has an electrodermal activity sensor, which measures minuscule levels of sweat on your skin to determine your stress levels. Meanwhile, the Oura Ring has body temperature sensors to help determine your sleep quality.

One of Fitbit’s more recent product releases, the Sense includes FDA clearance and allows you to track your stress levels in addition to measuring your blood oxygen levels. The watch also includes Google Assistant support.

Some fitness trackers will also opt for built-in GPS, which means the watch can directly connect to GPS systems without your phone. Others will use your phone’s GPS.

The sensors in a device will partially determine the data you can track. However, some companies have developed more complex algorithms to offer in-depth analysis. You can generally sniff out the more full-featured trackers by the number of sensors they have and the type of metrics they track.

There’s a wide range of trackers for all sorts of fitness levels and goals. 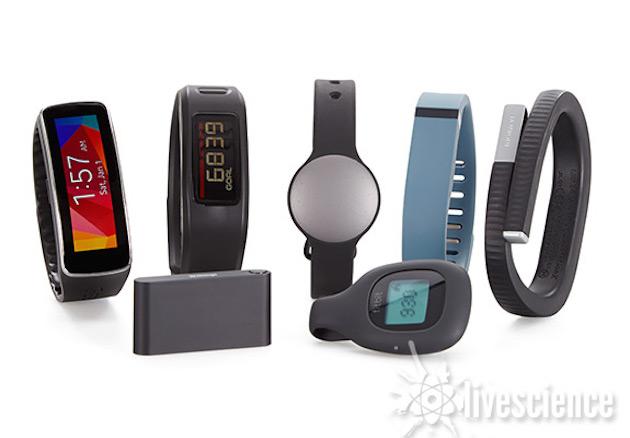 Companies like Garmin and Polar, for example, are well known among outdoors enthusiasts and triathletes. They also have entry-level devices, but that’s not where their main strengths are.

Fitbit offers more general use devices that are better suited to people who prioritize overall health.

Hardcore fitness watches are more likely to prioritize durability, downloadable maps, turn-by-turn navigation, and in-app training programs. They’ll also have activity profiles for more obscure sports. For example, Garmin just added kiteboarding on the Epix 2 and Fenix 7 Series. And if you’re a swimmer, you’ll want something with at least 5ATM of water resistance.

Meanwhile, there’s also a growing category of dedicated recovery trackers. These trackers focus on telling how well your body’s recovered from exercise so you can better plan your training. The Oura Ring and Whoop 4.0 are good examples in this area. These are more passive trackers that focus on advanced sleep tracking and how it relates to your overall activity. They don’t have screens, and you won’t be getting any notifications or smart features on them.

Of course, there will be overlap. A Fitbit Charge 5, for example, can get you a ton of wellness features, built-in GPS, and a new Daily Readiness feature that gauges your recovery. That said, it’s still not going to be as in-depth with your activity metrics as a Garmin would.

Do you actually want a smartwatch instead?

The thing about fitness trackers is they’re often lacking on the connectivity front. You’re likely not going to find them including LTE, robust third-party apps, contactless payments, or a digital assistant. Or if you do, it might be one or two of those — but certainly not all of them.

If you’re looking to leave your phone at home, you might be better off with a smartwatch that has decent health features. The Apple Watch Series 7 is a great example of this. It has a ton of health tracking and wellness features but also cellular models so you don’t need to carry your phone while you exercise. You can stream music directly to your wrist, take or make calls, and ask Siri to look up things for you. After you’re done exercising, you can also use the watch to pay for a bottle of water at the local deli. Samsung’s Galaxy Watch 4 is a good alternative for Android users and offers many of the same features.

The Apple Watch Series 7 comes in a range of colors with either GPS or GPS and LTE cellular connectivity.

The Galaxy Watch 4 features a snappy interface and more third-party support by way of Google’s Wear OS 3. But keep in mind that it’s paired best with a Samsung-made phone.

The trade-off is terrible battery life. The Series 7 and Galaxy Watch 4 don’t last much longer than a day (maybe two) on a single charge. That makes them less than ideal for sleep tracking or anyone who wants to track more than three hours of GPS activity. Meanwhile, Fitbits, Garmins, and Polar devices can often go for at least a week — if not several.

When browsing your options, don’t forget to check the size and thickness of the watch, as well as the materials it’s made from. If your fitness tracker isn’t comfortable, you’re not going to wear it. End of story.

Comfort is especially important if sleep tracking is a priority. You don’t want to buy a big hulking tracker, only to wake up in the middle of the night determined to take it off. Many people often have trouble sleeping with wrist-based trackers, so you might also want to look into non-wrist-based sleep gadgets like the Oura Ring. (They’re not as common, however.)

A bad fit can also warp your data. If a tracker isn’t snug against your skin during exercise, you might get inaccurate heart rate readings. If it’s sliding up and down your arm, your movement data may also be borked.

This isn’t as big of a problem for people with larger wrists. However, if you’ve got smaller wrists, it’s not a good idea to buy a watch that’s over 42mm. This is not as much of an issue with casual trackers, but it becomes important once you get into multisport GPS watches. Those watches often measure from 45mm to 47mm, but I’ve tested ones that go up to 51mm, like the Fenix 6X Pro Solar. Many companies don’t offer smaller options for advanced fitness watches, but a handful do. Garmin, for example, tends to offer multiple sizes for each product.

A fitness tracker can be as cheap as $60 or as expensive as $1,000. The more features you want, the more it will cost you. On the lower end, you tend to see no-frills fitness bands like the Mi Band 6 and Fitbit Inspire 2. They have simpler screens and a smaller feature set but tons of battery life. On the higher end is where you’ll find luxury smartwatches and premium multisport GPS watches. The Garmin Fenix 7 lineup, for example, starts at $699.99 and goes all the way up to $999.99.

For most people, the sweet spot is in the $150 to $350 range. Trackers under $250 have gotten a lot more advanced in the past few years as well. The Fitbit Versa 3 retails for $229.95, but you can often find it on sale for less. It’s a good example of a fitness tracker that tracks a wide range of health features but has some smartwatch-like features like a digital assistant.

The Garmin Vivomove Sport is an affordable, stylish hybrid-analog tracker. It’s not as beefy as Garmin’s other trackers and is well suited for casual activity.

The other thing to look out for is subscriptions. Unfortunately, more wearable makers are shifting toward a subscription model. Some, like Fitbit, give you an option. You could pay $9.99 for Fitbit Premium, but you don’t have to. The catch is the best features are often locked behind that paywall. Fitbit’s Daily Readiness Score metric, for instance, is exclusive to Fitbit Premium subscribers. Other companies make subscriptions a requirement. Whoop, for example, charges $30 for a monthly membership. That said, there are still excellent subscription-less trackers out there.

Tags:  how to pick a fitness watch