Recently, my brother mentioned he was sleeping better since he got new prescription glasses with a blue-light filter. He wears his glasses mostly for reading screens (both computer and smartphone) during the day while at work. So I was intrigued, but a little skeptical: could daytime use of blue light-filtering glasses make a difference in how well he slept? How, when, and why blue light affects us seemed like good questions to pose to an expert before deciding whether those glasses could help me, too.

Visible light includes a short segment of wavelengths tucked into the electromagnetic radiation spectrum. Together, the wavelengths of visible light captured by our eyes are translated into white light by our brains.

You may remember looking through a prism to bend the wavelengths that make up white light into a rainbow of colors. At one end of this rainbow, blue light shades toward violet. Sunlight has a lot of light at all visible wavelengths.

In addition to helping us see, light also has nonvisual effects on the body, says Dr. Steven Lockley, a neuroscientist at the Division of Sleep and Circadian Disorders at Harvard-affiliated Brigham and Women’s Hospital. 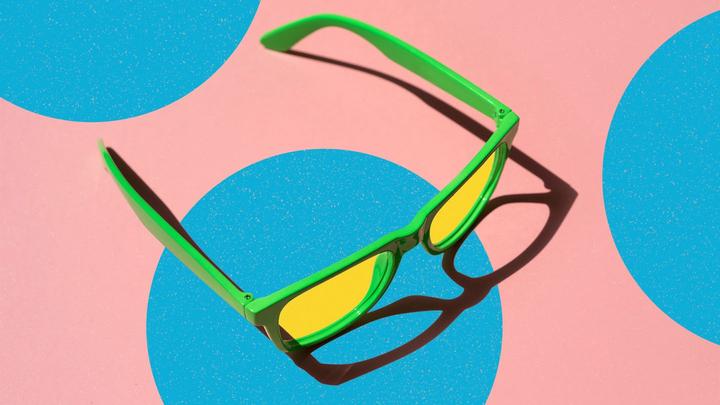 The 24-hour circadian clock in the brain regulates sleep and wake cycles, hormonal activity, eating and digesting, and other important processes within the body. "Special photoreceptors in the eye detect light to control our circadian rhythms," he says. These cells contain a nonvisual photopigment called melanopsin, which is most sensitive to 480 nm light at the blue-green end of the visible light spectrum. Other visual photoreceptors called cones allow us to see even shorter wavelengths of blue-violet light at around 450 nm.

During the day blue-enriched light is desirable, because it helps synchronize our circadian clocks to a 24-hour day. So, exposure to a regular light-and-dark cycle is vital to achieve and maintain good sleep.

Stimulation from certain wavelengths of blue light helps us stay alert, whether this comes from a natural source like the sun in daytime hours, or from electronic devices that emit blue light. While the stimulation is helpful during the day, at night it can interfere with sleep. Blue-light exposure in the evening — for example, binging a TV series on your laptop right before bed — will stimulate the melanopsin-containing cells and alert the brain, making it think it is daytime. That can make it harder to fall asleep and may affect the quality of your sleep.

Although a recent systematic review suggested that blue light-blocking glasses may help people with insomnia, Dr. Lockley says there’s not enough detail about the studies to draw that conclusion. Most commercially available blue light-filtering glasses, and special coatings added to prescription lenses, aren’t standardized. So you have no way of knowing which wavelengths are being blocked, and whether this affects only visual function, or important nonvisual functions such as alertness and the circadian clock. Also, the timing, duration, and nature of the nighttime light exposure in the summary of these studies was not clear.

If you want to block stimulating blue light that could interfere with sleep, avoid screen use as much as possible after dusk — especially within two to three hours of bedtime. You can also try using computer software that reduces the amount of blue light emitted. Examples include Night Shift (available on Apple devices) or f.lux, a free download available for all computers and related devices. You should also try to address other issues that affect your sleep.

To help reduce eye strain, a common concern for people who use screens often, the American Academy of Ophthalmology advises taking regular breaks using the 20-20-20 rule. Every 20 minutes, look away from your screen at an object about 20 feet away for about 20 seconds.

You should also get as much daylight exposure as possible in between screen use to provide a strong circadian and alerting stimulus, particularly if you spend most of your time indoors.

As for my brother, he doesn’t watch much television and tends to prefer reading print books in the evenings. He agreed that he might be experiencing a placebo effect from the blue-light filter on his new glasses — or simply that he is sleeping better now that he has the correct prescription, and therefore less eye strain.