Apple Watch vs. Fitbit: Which smartwatch brand should you buy?

Apple Watch vs. Fitbit is a common predicament for first-time wearable users. Do you get Apple’s ultra-popular smartwatch or do opt for one of Fitbit’s fitness trackers instead?

The Apple Watch Series 6 is the latest flagship, starting at $399 but increasing in price when you configure the size, case material and cellular support. When the Apple Watch 7 launches later this year, it’ll likely cost the same.

Fitbit has a more expansive product lineup than Apple. Its products can be split into two categories: activity bands and smartwatches. The current activity bands include the $149 Fitbit Charge 4, $149 Fitbit Luxe and $99 Fitbit Inspire 2.

The Apple Watch design has hardly changed in the six years since the original model put practically smartwatches on the map. Its squircle shape is extremely recognizable, though not very fashionable. Instead, the Apple Watch looks techy, like a computer on your wrist — not like jewelry, even if you opt for the $1,229 Hermès edition.

Still, many of Fitbit’s models look just as sporty as the Apple Watch, especially theCharge 4andInspire 2. Since the activity bands are slimmer and less obtrusive than smartwatches, we could argue they’re more conducive to working out.

As for durability, every Apple Watch is swim proof, so it can withstand underwater workouts. The water resistance of Fitbits vary by model, so see our guide on 'Is Fitbit waterproof?' for a detailed breakdown.

Both Apple and Fitbit let you customize the look of your wearable through interchangeable bands. The best Apple Watch bands range from double-loop Hermes leather straps to the stretchy Solo Loop. Fitbit’s bands are mostly silicone, although the Fitbit Luxe is compatible with an attractive metal chain from jewelry company gorjana. 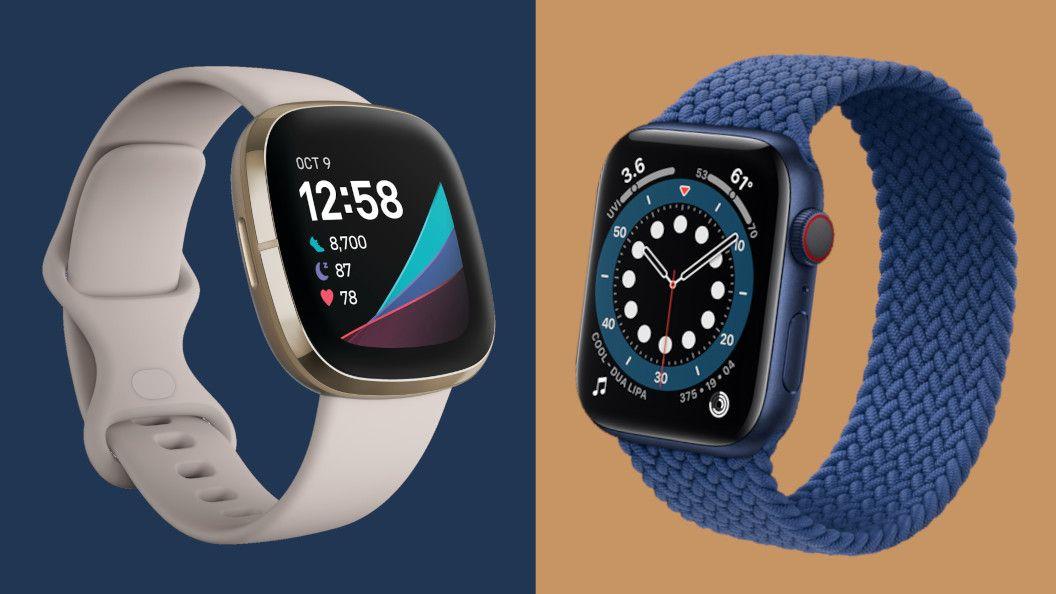 Both the Apple Watch and Fitbit models pack a plethora of fitness and health features. All versions of these wearables can monitor your heart rate, steps, calories burned, workouts and sleep. When it comes to sleep, Fitbit provides more in-depth sleep cycle analysis, while Apple Watch focuses more on establishing a bedtime routine and daily sleep goal.

Beyond those baseline metrics, you’ll want to review the specs of whichever device you buy. For one, every Apple Watch has GPS on-board, but not every Fitbit does. Only the Charge 4, Versa 3 and Sense can track your routes without relying on your phone.

As for personal activity tracking, Fitbits and the Apple Watch use different motivation guidelines. The Apple Watch’s rings encourage you to complete move, stand and exercise goals by gamifying getting active every day. Fitbit plays more of a long game, using Active Zone Minutes to recommend 150 minutes each week spent in target heart rate zones.

Beyond your physical health, you might want your smartwatch or activity band to help you with your mental health. Although the Apple Watch has a built-in breathe app, Fitbit trackers have an edge in terms of stress management. The Fitbit Sense even uses an EDA sensor to quantify how stressed you are, while the Fitbit app offers meditation tools and other actionable advice.

Apple Fitness Plus vs. Fitbit Premium

If you want to expand your wellness profile, you can sign up for a paid Fitbit Premium membership. It costs $9.99 per month, although most of Fitbit’s new trackers offer several months free for first-time users. Fitbit Premium has advanced activity and wellness insights, including advanced sleep data, guided exercise programs and mental health sessions with self-help guru Deepak Chopra.

The Apple Watch’s comparable service is Apple Fitness Plus, which also costs $9.99 per month or $79.99 per year. It’s not as comprehensive as Fitbit Premium, but it does include a growing library of workout classes led by professional coaches. Apple Fitness Plus classes take place in stunning Hollywood-quality studios, and span 10 different types of workouts with built-in soundtracks you can stream anytime with Apple Music.

There’s no perfect health app for everyone. That said, if your main goal is to get in shape, Apple Fitness Plus makes it fun and easy. Fitbit Premium is better for improving your overall relationship with your health.

Of course, you might want your wearable to do more than monitor your health. Every Apple Watch model offers notifications, alarms, timers, an expansive app store, Siri and more. Fitbit also offers basic features like notification mirroring, although its app store is less impressive than Apple’s. Every Apple Watch also supports NFC payments through Apple Pay, while only select Fitbit models support NFC payments through Fitbit Pay.

Fitbit latest smartwatches also use Alexa or Google Assistant instead of Siri, while none of the brand’s activity bands offer voice control.

You’ll need to have an iPhone to set up your Apple Watch, either way. The Apple Watch is not compatible with Android smartphones. Fitbit plays nice with both iOS and Android phones, but only select Fitbits set up with an Android phone can be used to answer calls from your wrist.

The Apple Watch doesn’t win any awards for battery life. At best, we’ve found the Apple Watch 6 lasts 24 hours without a charge, but GPS use, activity tracking and display settings will cut that down closer to Apple’s estimated 18 hours. Although the Series 3 and SE don’t offer an always-on display, the battery life experience is similar. These models have older chips with worse battery efficiency than the Series 6’s S6 chip.

Apple Watch vs Fitbit: Which should you get?

Fitbit has greater options for your budget, better battery life and a more comprehensive health tracking service than the Apple Watch. But the Apple Watch is easier to shop for, since the three models currently available all offer key features like GPS, the watchOS app store and fitness tracking. It also gives iPhone users the option to leave their handset behind with a Cellular option.

Of course, if you have an Android phone, there’s really no debate. A Fitbit is better for you, although you’ll need to read the fine print before buying. Not all Fitbits are made the same, so you should check that the one you’re getting has all the features that matter to you.