What’s new to Netflix NZ, Neon and other streaming services in December The biggies The notables The movies The rest Television

What are you going to be watching in December? With thanks to our friends at Nando’s, we round up everything coming to streaming services this month, including Netflix, Amazon Prime, Disney+, Apple TV+, Neon and TVNZ OnDemand.

And Just Like That (weekly on Neon from December 10)

It’s been a long time since we left Carrie, Miranda and Charlotte drinking Diet Coke in a tent in Abu Dhabi, but after years of waiting and wishing, the Sex and the City team (sans Kim Cattrell) are back. This new ten-episode reboot picks up as the New York friends navigate their way through their 50s, menopausal and middle-aged and still wearing incredible clothes. The reboot promises a far more diverse cast than the original, and since it’s not often we get TV shows that centre smart and successful women in their mid-life – a time when many women report feeling invisible and ignored – this much-loved show deserves a warm welcome back./Tara Ward

The Witcher (season two on Netflix from December 17)

Before it was dethroned by Bridgerton and then Squid Game, The Witcher was the most watched series ever on Netflix. It was so huge that it led to the game it was based on, nearly five years old that at that point, shooting up the charts of the most streamed games on Twitch. Which is to say that the second season of Netflix’s first big foray into fantasy is going to be a big deal. The first season played largely as an origin story for the found family of Geralt, Ciri and Yennefer, while this season will aim to get into the messy, dark and very fun lore of the world created by Polish author Andrzej Sapowski. / Sam Brooks

The Book of Boba Fett (weekly on Disney+ from December 29)

Star Wars nerds from the 80s, your prayers have been answered: Boba Fett is back. After the character’s surprise appearance in the second season of The Mandalorian, it was only a matter of time before the bounty hunter of the original trilogy came back for his own show in the evermore sprawling Star Wars cinematic universe. The series follows Fett (New Zealand’s own Temuera Morrison at his gruffest) and Fennec Shand (Ming Na-Wen) as they attempt to take control of the criminal underworld once controlled by Jabba the Hutt. Jennifer Beals also stars as a Twi’lek? Sure! / SB

What’s your appetite for a post-pandemic survival story right now? If it’s slim to none, after the past three months, no one would blame you. But you might want to reconsider, because Station Eleven has lots going for it. For starters, the 10-part mini-series is from HBO, which remains a mark of quality. The series is based on Emily St John Mandel’s best-selling novel, about a global virus wiping out much of the population. And it’s directed by Hiro Murai, best known for his Emmy-nominated work on the incredibly stylised Atlanta. I also just love the look of the trailer, which is full of beautifully shot weirdness. I’m in. / Chris Schulz

I’ve been looking forward to this Tracy Oliver series for quite some time, so I’m stoked that it’s finally dropping, in its entirety, just in time for Christmas. The series follows a group of stylish and ambitious Black girlfriends (played by Megan Good, Jerrie Johnson, Grace Byers, Shoniqua Shandai), who are at the centre of the cultural mecca that is New York City’s Harlem district. If you want something to tide you over while you wait for And Just Like That…, Harlem’s your best bet. And my guess is that it’ll probably be the one you come away thinking about more. / SB

Shortland Street: Retribution (weekly on TVNZ on Demand from December 21)

The Shorty Street drama doesn’t stop over summer, and this festive season Shortland Street: Retribution takes us on a special journey deep into the gritty underworld of…Christchurch. A pregnant Dr Esther Samuels celebrates the open border by popping down to the Garden City to surprise love of her life Curtis, only to find out he’s up to his ears in dodgy affairs. Will Curtis and Esther finally get their happy ending, or will Christchurch keep them apart like two forlorn lovers stuck on opposite sides of the Avon? More importantly, will they get a chance to visit Orana Park and The Margaret Mahy Playground? Who knows, but keep an eye out for guest stars Tammy Davis (Outrageous Fortune), Turia Schmidt-Peke (Ahikāroa) and Pana Hema-Taylor (Westside)./TW

Emily in Paris (season two on Netflix from December 22)

Last year the world went wild for Darren Star’s series about a naive American who moves to Paris, mostly because the frothy series was the perfect tonic to 2020’s real life hellscape. Season two drops this month, and yet again, Emily in Paris will be a welcome dose of escapism. The tres chic Emily is transferred from Chicago to Paris, and despite many, many misunderstandings (she doesn’t speak the language! French people are rude!), falls in love with the city. Cliches flow like cheap red wine here, so grab a beret and a garlic necklace and tuck in./TW

I absolutely adore Aisling Bea. The Irish comic’s been around for a few years now, mainly in supporting roles (like that weird Paul Rudd series on Netflix) or stealing the screen on panel shows (her season of Taskmaster is probably the best). Finally, New Zealand audiences get to see her in a show of her very own: This Way Up, written by and starring Bea. I’ve been waiting years to see this show and I can’t wait to enthusiastically binge both seasons as soon as they drop. / Stewart Sowman-Lund

Being the Ricardos (on Amazon Prime Video from December 21)

After playing a nervous wife in The Undoing and a Russian new-ager in Nine Perfect Strangers, Nicole Kidman extends her accent/wig limits in as she takes on the iconic role of Lucille Ball, star of beloved 1950s American sitcom I Love Lucy. Aaron Sorkin (Trial of the Chicago 7) writes and directs this biopic that takes place over one week in 1952, as Ball and her co-star husband Desi Arnez (Javier Bardem) navigate a crisis that could ruin both their public and private lives. Can Kidman do comedy, as well as good wigs? Only time will tell. / TW

The Power of the Dog (on Netflix from December 1)

By all accounts, Jane Campion’s latest is an absolute winner. Shot against the stunning backdrop of Otago, the Netflix western has been getting rave reviews ever since it first premiered and heading into awards season that momentum shows no sign of slowing down. With an all-star cast, including Benedict Cumberbatch, Kirsten Dunst and our very own Thomasin McKenzie, this is one you absolutely have to watch this December – especially those in Auckland who missed its Film Festival premiere. / SS-L

Don’t Look Up (on Netflix from December 24)

We’ve all become a bit blasé about Hollywood celebrities showing up on our streaming services, but even in this era of big stars and small screens, Don’t Look Up stands out. Just look at this cast list: Leonardo DiCaprio, Jennifer Lawrence, Meryl Streep, Cate Blanchett, Timothée Chalamet… deep breath… Ariana Grande, Chris Evans, Jonah Hill, Melanie Lynskey and Mark Rylance. It sounds like the film is going to be worthy awards-bait, but Don’t Look Up is actually a scabrously funny sci-fi parable about climate change, written and directed by Adam McKay (The Big Short, Vice). The premise? According to McKay, it all came from an offhand comment a friend made about our impending climate doom: “[He said] ‘It’s like the asteroid is going to hit Earth and no one cares.’ And I was like, ‘That’s it! I’m going to write that.” / Catherine McGregor

This post is made possible by our friends atNando’s.

The Power of the Dog

Single All The Way

David and the Elves

The Family That Sings Together: The Carmargos

How To Ruin Christmas: The Funeral

Still Out Of My League

Back to the Outback

The Hungry and the Hairy

StarBeam: Beaming in the New Year

The Hand of God

Puff: Wonders of the Reef

What Happened in Oslo

Vicky and Her Mystery

STAND BY ME Doraemon 2

Stories of a Generation with Pope Francis

Hilda and the Mountain King

Barbie and the Diamond Castle

Barbie and the Magic of Pegasus

Barbie and the Secret Door

Barbie and the Three Musketeers

Barbie as the Princess and the Pauper

Barbie Fairytopia: Magic of the Rainbow

Barbie in a Christmas Carol

Barbie in The Nutcracker

All I Want For Christmas

The Case For Christmas

Christmas at the Movies

A Husband for Christmas

Once Were Brothers: Robbie Robertson and the Band

The Trip to Greece

Let Them All Talk

The Sex Lives of College Girls 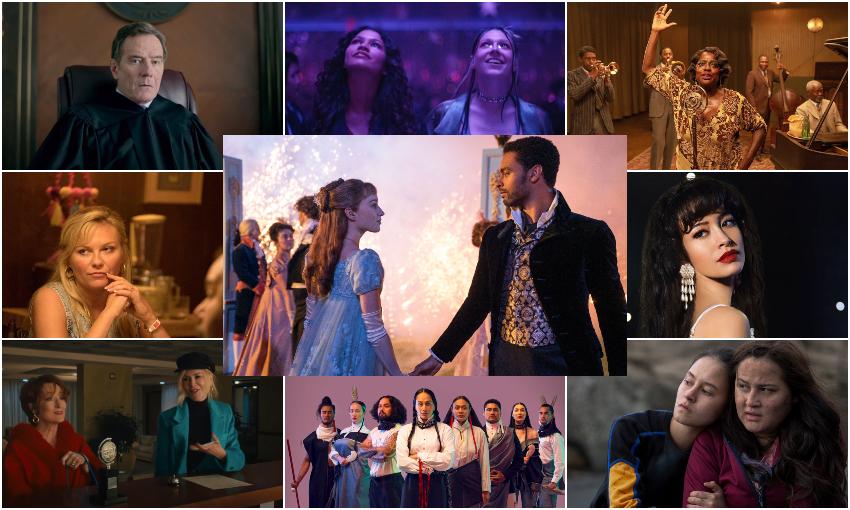 The Light on the Hill

The Soul of Flies

The Redeemed and the Dominant: Fittest on Earth

Wrapped Up in Christmas

The Case of Caylee Anthony

Amy Winehouse: Back to Black

Ross Kemp Behind Bars: Inside Barlinnie

Diary of a Wimpy Kid

Mickey and Minnie Wish Upon a Christmas

A Muppets Christmas: Letters to Santa

Our Kind of People

Sydney to the Max: Season 3

Alvin and the Chipmunks: Chipwrecked

Alvin and the Chipmunks: The Road Chip

Alvin and the Chipmunks: The Squeakquel

Birdman (Or The Unexpected Virtue of Ignorance)

The Book of Boba Fett

The Legend of Tarzan

Sir Alex Ferguson: Never Give In

Memoirs of a Geisha

The Syndicate: All or Nothing

Screams of a Winter Night