New updates are being added at the bottom of this story…

After a lengthy gap, Xiaomi has once again started pushing out MIUI Weekly Bug Reports. These reports aim to present some of the most commonly faced issues on various Xiaomi devices along with their current status.

Several bugs that haven’t been escalated yet are also mentioned therein with possible reasons and workarounds – a great one-stop solution for those whose MIUI experience hasn’t exactly been tip-top lately.

This report also effectively eliminates the need for rummaging around the forums for solutions of trending issues.

The report firstly mentions the microphone issue on the Mi Mix 3 wherein the volume levels are too low to be easily audible. The bug is present on MIUI V12.0.5.0.

Thankfully, a new bug-fixing build will be pushed out as early as this weekend to address the issue. 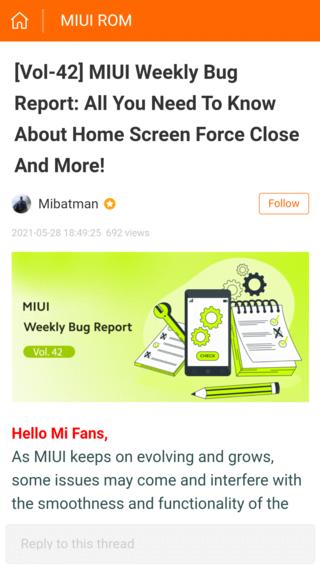 There have been several reports of system lags on the Redmi Note 9S especially following the Android 11 update. Sadly, Xiaomi devs haven’t yet been able to identify the source of the problem and have said that further analysis is required.

It is worth mentioning here though that the Redmi Note 9S isn’t the only device being plagued by poor performance on MIUI 12. Xiaomi has explained the reason for this in detail here.

The random reboot issue on the Redmi Note 9 Pro is a longstanding problem that has been plaguing the device for several months now. Thankfully, it is being investigated so a fix should be released sometime in the future.

There have been several complaints from Poco F3 users about touch issues in the past and it now seems that the device’s Indian variant – Mi 11X – has been affected by the same as well.

Upon investigation, it was discovered that the issue doesn’t exactly originate from the kernel-end of the device. Still, the problem is currently under investigation and further details will be provided later.

Some Redmi Note 10 Pro users also appear to be facing problems with their Wi-Fi for which a possible solution has been given below:

The MIUI 12/12.5 Weekly Bug Report also mentions the proximity sensor issues affecting the device. For more details about that, head over to our previous coverage.

06:37 pm (IST): A new weekly bug report has been posted on the Mi Community. We have pulled some of the new stuff from it:

Issue: No unlock PIN option in SIM card setting(No Signal).Device: Xiaomi Mi 10 ProAffected Version: V12.5.1.0 RJAEUXMStatus: After updating to MIUI 12.5, there is no signal on the mobile phone sim card, restarting the phone or plugging and unplugging the sim cannot solve it, and it needs to be restored to the factory to solve it. A Spanish Mi Fan reported that it received 3 similar feedbacks from a Mi 10 Pro group, which could not be reproduced locally.‌‌

Issue: Home screen setting FC/No responseDevice: Xiaomi Redmi Note 9 Pro MaxAffected Version: V12.0.4.0 QJXINXMStatus: The repaired APK has been tested on 5/27. And manually can be fixed by clearing the cache and data of the system launcher.

PiunikaWeb started purely as an investigative tech journalism website with a main focus on ‘breaking’ or ‘exclusive’ news. In no time, our stories got picked up by the likes of Forbes, Fox News, Gizmodo, TechCrunch, Engadget, The Verge, MacRumors, and many others. Want to know more about us? Head here.

Tags:  why the android samsung disconnect from smart watch v12