Whatever you did to get through this year, it likely involved watching a lot of TV. For us, picking the best TV shows of 2020 meant thinking about the series that offered pure escapism this year, or insight on human experiences, or watching a man with a mullet hoard a questionable number of big cats. In short, TV gave us more than this year than ever before in terms of subject matter – and in the absence of actual, meaningful in-person human experiences, we needed the variety.

Below, we've rounded up the best TV shows of 2020 according to the TechRadar team. Our process was fairly simple: each editor could vote for five shows of their choice, and we tallied the votes to create this final outcome – which we feel reflects the broad array of TV we enjoyed this year. Below, our writers explain why they think they're worth watching, with each discussing a show they voted for.

If you haven't checked all of these series out yet, we've listed where to stream them below.

When it comes to basketball, I don’t know a block out from a brick. But Netflix’s The Last Dance, the retrospective docuseries looking back at both the career of superstar Michael Jordan and the Chicago Bulls’ monumental 1997-98 NBA season, shoots three pointers throughout.

Using reams of never-before-seen behind the scenes footage, it’s an intimate look at life on and off the court. Yes, it’s about basketball, and a sports documentary may not be for everyone. But it’s also about being the greatest in the world at your chosen skill, and the unfathomable sacrifice, gain, passion, sadness, arrogance and humility that must come with that in order to succeed. Absolutely essential viewing. – Gerald Lynch

Remember puberty? That crushing realization that your body is changing at a totally different speed to everyone else, and the fact your peers are hyper aware of each other in new, exciting and often terrifying ways?

Where to stream it: Hulu (US), BBC iPlayer (UK)

After her partner goes missing on his first day working at a secretive, successful tech firm in Silicon Valley, Lily Chan (Sonoya Mizuno) tries to uncover what happened to him at the hands of the company's enigmatic CEO Forest (Nick Offerman).

From there, this moody drama only gets spookier and more sci-fi – which is what I'd expect from Alex Garland, director of standout modern genre films Ex Machina and Annihilation, who also brought along his frequent cinematographer Rob Hardy along to make this show look film-like. This is an unmissable miniseries that cleverly explores the notion of free will, even though it's disguised as a slow-burn Silicon Valley drama with a slightly boring name. Do not miss it. – Samuel Roberts 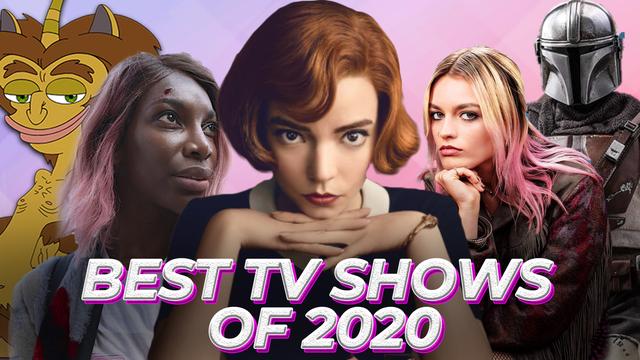 We’ve never had more need for a feel-good TV show than in 2020, and Queer Eye season 5 continued to tug at our heartstrings and make us belly-laugh when we could all really do we a good pick-me-up.

This season saw the Fab 5 give makeovers to a gay pastor craving a new look to match his newfound confidence, a father of the bride who wanted to step it up for his daughter’s big day, and a pediatrician who finally got the TLC she needed after putting her career and family first for years. But, you shouldn’t write Queer Eye off as just another fashion show, Henny. As the tagline says, these shows are about ‘more than a makeover’, and you’ll learn just as much about the human psyche as you will about the proper execution of the French Tuck. – Olivia Tambini

This brooding 12-episode drama series on iPlayer, based on the bestselling Man Booker-longlisted novel of the same name, follows two Irish teenagers learning to live and love as they untangle the toxicity of their families, peers, and each other. Connell and Marianne start off as distant classmates, one the popular athlete and another the maligned loner – with their on-and-off passion and countless miscommunications making for one of the most moving depictions of young, imperfect romance ever to grace the small screen.

Beautifully shot, with an economical screenplay from Alice Birch (Lady Macbeth), it’s a show that knows exactly how to tug your heartstrings. – Henry St Leger

The definition of a lockdown hit, it's tough not to think of Tiger King without remembering that early part of the pandemic where it seemed plausible that the virus wasn't going to consume the entirety of 2020. To me, Tiger King is synonymous with people learning how to make sourdough, or doing daily YouTube exercises, in a bid to stave off the overall low mood of this year.

The story of big cat-obsessed park owner Joe Exotic is an outrageous true crime epic, and so implausible that it's incredibly entertaining. It's funny even when it shouldn't be, mostly because of Exotic himself, and it's full of memorable real-life characters – even if the portrayal of some of its key players raises an eyebrow.

The show also seems only vaguely interested in the exotic animals that live in these parks in the US, which is surely worth pondering as much as Exotic's own ludicrous antics. Still, like 2020 itself, I never want to think about Tiger King again after this year ends. – Samuel Roberts

4. I May Destroy You

Where to stream it: HBO Max (US), BBC iPlayer (UK)

For a TV show that captured the zeitgeist more than any other this year, I May Destroy You took a refreshingly un-2020 approach to exploring its main themes of sex and trauma. Written and co-directed by Michaela Coel (of Chewing Gum fame), the 12-parter follows author and social media star Arabella, whose world is thrown off axis by the blurred memory of a rape that took place after a spiked drink.

What follows is a brilliant, nuanced look at the gray areas explored by Arabella and her two close friends, Kwame and Terry, along with the long-term effects of assault. Despite its heavy themes, I May Destroy You never feels too weighty or didactic either. Instead, you get jarring gear shifts from drama to comedy, all via a non-linear format that recreates the sense of trauma resurfacing in the midst of real life. Hopefully it’s a sign of things to come from other HBO-BBC creations in the future. – Mark Wilson

Before you sit your child down in front of Netflix with the hope that Gillian Anderson will bear the responsibility of teaching little Timmy about why his ding-a-ling is looking a tad different these days, please know that while this show does actually have some fantastic educational content, it's also wonderfully filthy.

In a school that somehow manages to be a hybrid of the US and UK experience, we follow socially insecure and hormonal disaster Otis as he navigates the world of puberty and sexual awakening, while trying to get good grades and hide from his embarrassing sex-therapist mum.The show is crass, hilarious, wholesome and honestly the wildest emotional journey I’ve experienced in a TV show this year. Every character arc is so utterly relatable for young adults that the content hits home in a refreshing way, and you’ll start to wonder how a TV show can make you empathetically cheer when a character can finally spank the monkey. – Jess Weatherbed

Chess drama The Queen's Gambit is a monster hit for Netflix that seemingly came out of nowhere – it certainly wasn't on my radar until I saw The Witch's Anya Taylor-Joy was its star, and that veteran writer/director Scott Frank (Logan, Godless, Out of Sight) was behind this adaptation.

It's essentially a sports movie, as orphan Beth Harmon is taught to play chess by a talented janitor, before she successfully pursues a career in the male-dominated competitive scene. She pulls this off while contending with alcoholism and pill addiction, and wearing a lot of stylish dresses.

As well as being an unbelievably nice-looking '60s-set period show in terms of its costume design and sets, The Queen's Gambit features an amazing ensemble cast (most notably Harry Melling, once best known as Dudley Dursley from the Harry Potter movies) and manages to make every chess match look uniquely thrilling. An inspiring show with a kind heart at its core. – Samuel Roberts

Where to stream it: Disney Plus

The Mandalorian is a crowd-pleasing entry for best TV show of the year – but while I'll admit this is a conventional choice, there's a reason so many of the TechRadar team voted for it. The first-ever Star Wars live-action TV series stepped up its level of action and drama this season, as well as its ambition in weaving in exciting elements of its vast fictional universe. In the absence of blockbuster movies, The Mandalorian successfully managed to take its place, bringing that same level of conversation and excitement around each episode.

It's been so much fun to watch each week, and the quality of episodes was far more consistent this season, thanks to a fairly obvious increase in budget and more confidence in its way of telling stories. The calibre of guest stars is out of control, too – Rosario Dawson, Temuera Morrison, Timothy Olyphant, the returning Bill Burr and the final episode's surprise cameo all helped make this season feel extra special.

The episode structure remains very simple – our Mandalorian (Pedro Pascal) helps someone with their problem in every single episode, while Baby Yoda does something cute and GIF-worthy – but the scale of set pieces makes it feel as cinematic as any Star Wars movie. This is the best the galaxy far, far away has ever been in Disney's hands, and bodes well for the many new shows they have in the works. – Samuel Roberts