No. 17 Utah beat No. 10 Oregon 38-10 to win the Pac-12 championship on Friday night and secure a trip to the Rose Bowl for the first time in program history. After the game, Oregon coach Mario Cristobal shot down rumors that he could be offered a head-coaching job at Miami if the Hurricanes fire Manny Diaz.

"I haven't talked to anybody, so let's not create narratives as we sit here in this press conference," said Cristobal, who also addressed reports of the Ducks offering him an extension. "Oregon is working on some stuff for me."

Cristobal added: "If I had any plans, if I had a decision to make, or if I had something to report, I would. Do I expect people to come at me? Yeah, I do. It happens every single year. ... There's nothing else to report besides that." 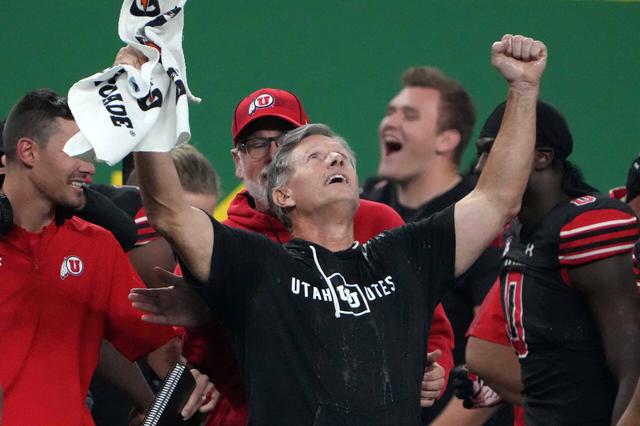 The Utes scored on their opening drive to set the tone for a dominant win. Utah capitalized on Oregon's struggles, with Devin Lloyd scoring on a 34-yard interception return touchdown on the Ducks' second possession of the game.

Utes quarterback Cameron Rising threw back-to-back interceptions in the second quarter, and Oregon got into field-goal range on the first pick. However, kicker Camden Lewis missed a 44-yard field-goal attempt. The Ducks failed to score in the first half, allowing Utah to have a 23-0 lead at halftime.

Oregon kicked a field goal to open the second half and failed to score again until Travis Dye's 2-yard touchdown run late in the fourth.

Utah sophomore running back Tavion Thomas rushed for 64 yards on 17 carries. He scored two touchdowns on Friday to reach 20 total rushing scores on the year, setting a single-season record for the Utes.

Friday marked the Utes' second win over the Ducks this year after a 38-7 victory in their regular-season matchup. In their first meeting, Oregon struggled against Utah, running for only 63 yards and giving up 208.