Quebec reinstated an 8 p.m. curfew in Montreal and Laval on Sunday, April 11, and residents took to the streets to protest.

Over 1,000 people gathered in Montreal's Old Port on Sunday night in defiance of the earlier curfew, smashing windows and starting fires before police eventually broke everything up.

Editor's Choice: Police In This Ontario City Are Cracking Down On 'Sitting Or Sunbathing' In Parks 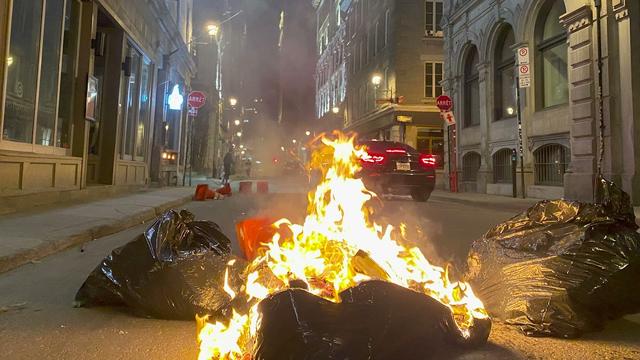 MTL Blog reporter Alex Melki was on the scene throughout the destructive protest, capturing the moments that rioters got "a little rowdy."

"Cars were lined up on Notre-Dame Street East, honking along with the crowd’s chants. One man on a megaphone was reminding everyone that 'what’s important is that you’re here,'" Melki told Narcity.

"Things ramped up fast" from there, according to Melki— a fire was started using trash from nearby businesses and eventually a wooden public bench.

Cops rushed towards the crowd, banging on their shields. "It was windy too, so embers started flying up and almost caught some nearby trees on fire," Melki said.

According to MTL Blog, seven people were arrested and 107 fines for violating public health rules were handed out.