Rain has started to push into southwestern New Jersey, right on schedule. And we already have seen a few severe thunderstorm and flash flood warnings posted. I would call them "precautionary" alerts so far — yes, there are some strong thunderstorm cells out there, but I haven't seen any weather that's truly "dangerous" yet.

The heaviest rain of the day is expected to scrape the western edge of New Jersey through this afternoon and this evening. Models have actually trended higher for total rainfall in SW NJ, steady for NW NJ, and a bit lower away from the rainfall "sweet spot". We're also seeing a later forecast exit time for final raindrops, closer to daybreak Friday morning.

Bottom line: Everyone in NJ gets wet Thursday into Thursday night. We'll probably average an inch of total rainfall across most of the state. To the west and north, totals may hit 2+ inches. The risk for severe weather is still there, in our warm and humid atmosphere. And we'll still be watching for minor to moderate flooding problems as the rain pours down.

A strong area of low pressure over the Great Lakes will send a strong cold front through New Jersey on this first full day of fall. And so our weather will turn wet, stormy, and maybe even nasty for a time over the next 24 hours. There are some elements to this forecast that warrant concern: Both the threat for flash flooding and for severe weather.

The front itself — the leading edge of a new air mass — will crawl from west to east throughout Thursday and Thursday night. Fueled by plentiful atmospheric moisture, bands of moderate to heavy rain will stream along that frontal boundary, generally from south to north.

Behind the front, we'll get a real taste of fall heading into the weekend. In fact, an extended stretch of crisp, comfortable weather should carry into next week too.

Nailing down the timing of the start, peak, and end of our impending rain has been a real struggle this week. And forecast models are doing much better as of this writing. Prime time for this storm system will be approximatelyNoon to Midnight Thursday.

The challenge has been accurately estimating the speed and orientation of the rain. Here's the daypart breakdown as I see it now:—Thursday morning...Pretty quiet. Some spotty rain may push into New Jersey.—Thursday afternoon...Rain spreads in, from southwest to northeast. It will be heavy in pockets. The concern for stronger thunderstorms also kicks in.—Thursday evening...Probably the biggest downpours. Yes, that means heavy rain and flooding issues may impact part of your Thursday PM commute.—Thursday night...Rain will largely end by Midnight, although showers may linger into early Friday morning, especially along the eastern edge of NJ.

So I think we have a good general idea of how the day will play out. But there is quite a bit of uncertainty still built into this forecast. I highly recommend you stay "weather aware" and be alert to changing weather and travel conditions all day. 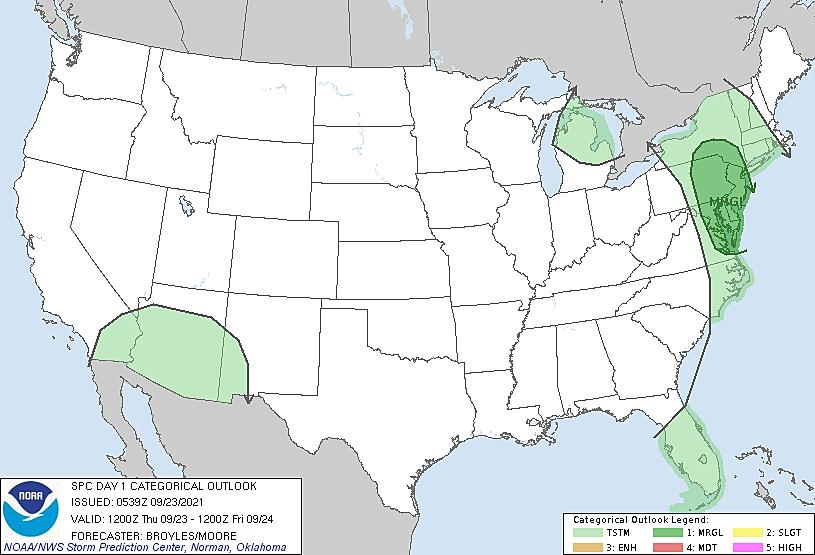 Again, a piece of the puzzle that needs some "wiggle room". I'm sticking close to my previous forecast. Rainfall totals to the south and along the coast will be "healthy" but not necessarily "heavy," just less than an inch. On the flip side, this storm system will be much more impactful to the north and west, with over 2 inches of rainfall possible.

It is worth noting that some mesoscale model runs have occasionally pumped out even higher totals in North Jersey. On the order of three, even four inches. Such increases can be attributed to the slow forward motion and rich moisture content of the atmosphere. Not every model agrees, but we have to consider the possibility and implications of such downpours. That's why the flooding concern has continued to rise.

Remember the "Flash Flood Guidance" benchmarks we've discussed this week. One inch in an hour. Three inches in six hours. That's what it would take to initiate widespread flash flooding of roadways, poor drainage, and low-lying areas.

AFlash Flood Watchis in effect for 12 counties in the northern half of New Jersey, from Thursday afternoon through Friday morning. Water could rise quickly along creeks, streams, urban areas, and poor drainage areas. Unnecessary travel should be avoided.

The threat for flooding will primarily occur during and just after the heavy rain — it won't last long. There are some river tide gauges that are forecast to touch the minor flooding category, including the Arthur Kill (at the mouth of the Raritan River), the Delaware River, and the Maurice River. However, unless rainfall significantly overperforms expectations, we should not see widespread water inundation issues from this storm system.

The lift of the approaching cold front, combined with the warmth and humidity, will spark enough instability and shear to warrant a severe thunderstorm concern. Especially as things ramp up Thursday afternoon and evening.

The Storm Prediction Center has put NJ in a "marginal risk" zone for dangerous weather for Thursday and Thursday night. That translates to a 5% of damaging winds and 2% chance of a tornado. I realize those numbers don't mean much — in plain English, the severe threat is worth mentioning, but I'm more worried about the flash flooding potential here. Eyes on the sky and play it safe, people.

This will not be another Ida. There's no rich tropical moisture in play. It's not going to rain half a foot in an hour. The severe weather parameters are not nearly as high. We will not see a tornado outbreak.

However, as we see from almost every "strong" storm system that visits NJ, it's pretty clear there will be roadway flooding and (possibly) severe weather issues later Thursday. I know many New Jerseyans are still very much on edge about such a forecast, given the devastation of just three weeks ago.

Knowing the risk is half the battle. Carefully consider how the weather may impact your daily routine. And when prime time hits, stay smart and play it safe.

Behind the front, dew points and humidity levels will drop like a stone Friday morning. Skies will quickly clear to sunshine by midday Friday. And there will certainly be a "fall feel" in the air through Friday afternoon, with temperatures settling in the lower 70s or so. There is a chance some rain showers clip the coast on Saturday — otherwise the weekend looks great.

That will begin an extended stretch of pleasant autumnal weather conditions, lasting through the weekend (lower 70s) into early next week (mid 70s). Mornings will be particularly crisp and cool, bottoming out in the 40s (NW and Pine Barens) and 50s.

Our next substantial chance of rain down the road won't arrive until about the middle of next week.

BEEP BEEP BEEP: These are the 13 types of Wireless Emergency Alerts auto-pushed to your phone

The Wireless Emergency Alerts (WEA) system allows government officials to immediately and automatically push messages to all cell phones and mobile devices within a specific geographical area. There are a total of 13 types of messages that can currently be sent as a Wireless Emergency Alert. Nine of them are weather-related warnings, including one that is brand new as of August 2021.

LOOK: The most expensive weather and climate disasters in recent decades

Stacker ranked the most expensive climate disasters by the billions since 1980 by the total cost of all damages, adjusted for inflation, based on 2021 data from the National Oceanic and Atmospheric Administration (NOAA). The list starts with Hurricane Sally, which caused $7.3 billion in damages in 2020, and ends with a devastating 2005 hurricane that caused $170 billion in damage and killed at least 1,833 people. Keep reading to discover the 50 of the most expensive climate disasters in recent decades in the U.S.
Tags:  why does my smart watch blink green