Michael Kors Access smartwatches: Pick the best for you

Michael Kors is now a key part of the smartwatch world, and for those who care as much about how a smartwatch looks as the tech inside it's a great option.

Michael Kors was one of the first fashion brands to embrace wearable tech in a big way. It started with Wear OS smartwatches (back when it was Android Wear) and even made hybrid smartwatches and fitness trackers brandishing that MK name.

Now it's focused on growing its super stylish Access watch collection offering options for men and women carrying that unashamedly fashion focused look. It's also now offering something that's a bit fit for the gym too.

If you're a Michael Kors fan, and like the idea of having an MK connected watch around your wrist, we break down what you need to know before you grab one and pick out the best options to buy right now.

All Michael Kors smartwatches offer the same combination of a watch design based on existing watches without smarts with a digital display front and centre.

Running the software show is Google's Wear OS operating system. You can read our dedicated guide to Wear OS for a full rundown of everything a Google-powered smartphone can do.

When you pair your Android or iPhone with one via Bluetooth, you can do the following:

Much like a Michael Kors watch without any smart features, MK smartwatches do not come cheap. Depending on what model you go for, you could pay less than what it costs to buy the latest Apple Watch, but you can also pay more for one.

The collection of watches try to offer the same high grade materials and straps you'd associate with Michael Kors watches to make sure you're still getting a watch that's as well built.

As mentioned above, all Michael Kors smartwatches are compatible with iPhones. Like with Android phones, you'll need to download the Wear OS app from the Apple App Store to get things set up.

If you do pair it with an Apple smartphone, you will get largely the same experience as you do pairing it to an Android phone, but it won't be identical.

So, you can view your phone notifications, download apps directly from the watch, use Google Pay instead of Apple Pay and access Google's smart assistant if you don't want to use Siri. Though for the latter, you'll need to download a separate app to your iPhone to get it working.

Things you can't do include reading iMessages or reply to messages from third party apps like WhatsApp.

If you want a more detailed breakdown of what you can and cannot do, definitely read our guide to using Wear OS smartwatches on an iPhone.

Yes is the answer to this question. All of the newest watches in the Michael Kors collection offers the ability to change straps, which is handy if you want to move from a metal to a softer, more comfortable leather band for instance.

The good news is that you won't need to make a visit to a watch shop to change those straps and in most cases is a relatively straightforward process to do. If you want to buy those optional straps, you'll be looking to pay $50 for the leather options and around $100 for a mesh strap.

The latest addition to the MK smartwatch family is the Gen 6 Bradshaw, which is the first of the Michael Kors models to get the latest hardware and software features on offer.

There's four different designs including rose gold and gold two-tone looks all that offer fully round watch cases with a 1.28-inch, 416 x 416 resolution touchscreen display. It also runs on Qualcomm's latest Snadpragon Wear 4100+ platform alongside 1GB of RAM and 8GB of storage.

It runs on Wear OS and will be upgradeable to Wear OS 3 in 2022. Until then, you'll get all the usual Wear features like notification support, apps, music controls and offline playlist support for apps like Spotify. There's also built-in GPS and a heart rate monitor and a speaker and microphone to take calls when paired to your phone.

The Sofie has been a best-seller for Michael Kors' parent company Fossil Group and is one of the glitzier, daintier watches in its connected collection. It's undoubtedly part of MK's women's collection - with a smaller case size and a bit more glitz in the detail.

It measures in with a 41mm watch case and supports interchangeable bands. In typical MK fashion, you've got an array of models to pick from with the Sofie available in rose gold tone, pavé two-tone and gold tone options.

The biggest design feature that sets the Sofie apart from other Michael Kors watches is the pavé-studded top ring surrounding its touchscreen AMOLED screen.

Google's Wear OS brings notifications, payments, Google Assistant integration, a music player and music controls and the ability to download apps. There's a nice array of watch faces and the addition of two physical buttons lets you set up shortcuts to your most frequently used apps and features. Unfortunately though, it looks unlikely that it will be upgradeable to Wear OS 3.

Google Fit will take care of your health and fitness tracking though based on our experience you may want to seek out a third party alternative instead. You've got a heart rate monitor and GPS here too, though it's not the most appropriate for taking out for a run. Think of it more as being useful as a basic fitness tracker.

Battery life is put at 24 hours, though if you are using fitness features, you will see a significant drop in watch time. 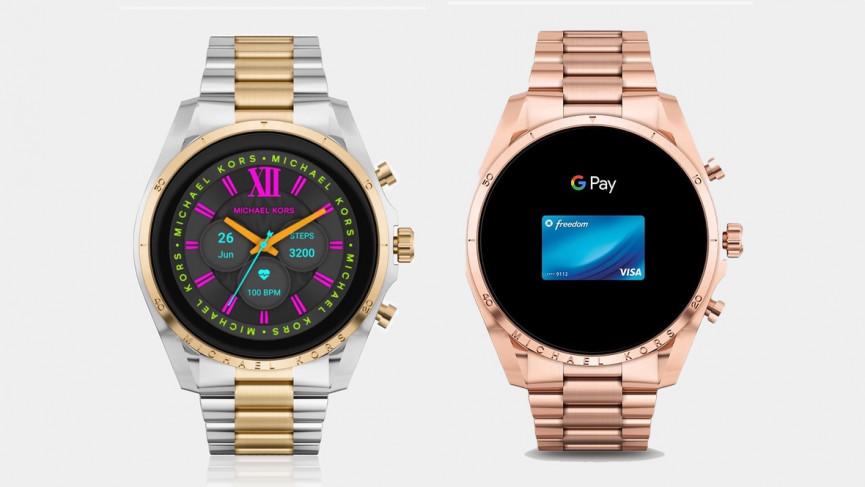 If you are looking for an MK smartwatch that's slim and has a touch of glitz, it's an option. Just be mindful of that support for Google's big Wear OS 3 update.

Design-wise, you're getting a 43mm stainless steel case, 1.19-inch AMOLED screen and MK design flourishes like a pavé-studded bezel.

There's connected GPS as opposed to built-in GPS and a heart rate monitor to measure effort levels during exercise. A Snapdragon Wear 3100 processor powers performance, but unfortunately is another MK watch that won't be upgraded to Wear OS 3.

It's a statement watch that's a good fit for basic fitness tracking and solid smartwatch features that will also be a better fit on slimmer wrists.

The Lexington 2 is the biggest option in Michael Kors' collection and it's also the priciest andcan be picked up for as much as $425 depending on the model you go for.

The 44mm watch is available in five different looks including gold tone, tri-tone and silver tone metallic options all that come with a 22mm sized band. There's extra links included to adjust the size and get a better fit.

In terms of features, you're getting Google's Wear OS of course to bring smartwatch staples including payments, heart rate monitoring and GPS tracking as well as access to Google Assistant. There's also a speaker, so you can't make and take calls and hear responses from Google's smart assistant.

In terms of battery life, there's the promise of up to 36 hours, though that's dependent on features you regularly use. However, those sports tracking sensors and make calls, they will drain the battery quicker.

If you like your MK watches big, shiny and oversized, this is the option to go for. If you want a Michael Kors smartwatch that will be updated to Wear OS 3, then this like all other Snapdragon Wear 3100-powered smartwatches are going to miss out.

Have a read of our full Michael Kors Access Lexington 2 smartwatch review to see what else we liked and disliked about this showy option.

Like the Lexington 2, the Bradshaw 2 is the MK smartwatch you go for if you like your watches big and showy.

It comes in pavé tri-tone, rose gold-tone and gold-tone finishes all with the same 44mm size watch case. There's also additional blue-tone, pink-tone and blush-tone if you're looking for something in a bolder, more manly shade.

All come with interchangeable 22mm straps with extra buckles to adjust fit. It's also water resistant up to 30 metres, though it's not the kind of watch you'd actually want to take for a dip.

There's a punchy 1.28-inch AMOLED display to show off the best (and worst) of Google's Wear OS giving you the best that the operating system currently has to offer. You can make payments using Google Pay and there's a speaker to make calls. Though you need to be connected to your phone via Bluetooth to do that.

You're getting a performance boost thanks to the inclusion of Qualcomm's Snapdragon 3100 Wear processor alongside 1GB of RAM. There's now 8GB of external storage to free up more space for storing music and apps.

There's certainly nothing subtle about the Bradshaw 2, but with more masculine looks and that big, brash design there's still something quite appealing about the feature-packed smartwatch.

Michael Kors Access watches have always been fashion first until the arrival of the MKGO in 2019. The fitness-focused GO packs a 43mm case and comes in four bold colours to help it stand out on the gym floor.

Along with a swim-proof design, it also comes packing built-in GPS and a heart rate monitor with a 20mm interchangeable band keeping it around your wrist. That's holding in place a 1.19-inch AMOLED touchscreen display. It's a watch aimed at women, but we think the design and range of colors give it unisex appeal too.

Away from its sporty design and features, it does still run on Wear OS, but runs with some older hardware with 512MB of RAM and 4GB of storage. It does pack in Qualcomm's new Snapdragon 3100 processor to give it a boost on the performance front.

There's no big surprises in the software department with the usual array of apps and customisable MK watch faces. If you want something that's better suited to working out and lighter than its other options, this is the Michael Kors smartwatch you should be looking at.

You can have a read of our Michael Kors MKGO review to get our verdict.

Along with the MKGO, Michael Kors also launched a Gen 5E version, keeping that same stylish look, but putting it in something that's smaller, daintier and still offers a mix of smartwatch and sports watch features.

It’s still an unashamedly fashion-focused option with plenty of sparkles with a pave-studded ring around the edge of the screen. That's joined by a 1.19-inch AMOLED touchscreen display that's surrounded by a 43mm rose gold case.

With Google's Wear OS 2 and Qualcomm's Snapdragon 3100 platform powering things, you'll get features like notification support, Google Pay, access to native and third party apps and compatibility with iPhone and Android phones. The latter though will give you the most complete experience.

For sports tracking, there's a heart rate monitor and connected GPS, though don't expect wonders in terms of tracking accuracy for runs and high intensity workouts. This is one to turn to again for fitness tracking and monitoring general wellness.

It looks good and less hulking than some MK smartwatches and gives you enough in the fitness and smartwatch departments to make it a good option to consider.

Tags:  why micheal kors have difference price in smart watches