How to watch The Office UK: stream the hit comedy online from anywhere

Few comedies are as iconic The Office. As well as giving birth to the Ricky Gervais legend, it helped bring the mockumentary genre into the mainstream and spawned a highly successful offshoot in the America. In this guide, we'll explain how to watch The Office UK and stream the Ricky Gervais comedy from anywhere in the world.

The Office UK (as we'll call it for clarity) started all the way back in July 2001 on BBC Two and has since grown from a cult hit into one of the most successful British comedies of all-time. It's available on a large number of streaming services including Hulu in the US, which offers a FREE trial so you can see what it's all about.

Written by Ricky Gervais and his long-time collaborator Stephen Merchant, it follows the lives of employees at the Slough branch of a fictional paper distribution company.

Gervais also stars as the show's lead, office manager David Brent, who is arguably the most cringey character ever to appear on TV. The Office UK was also the first big break for a young Martin Freeman, who played Tim, and also introduced us to Lucy Davies - Tim's love interest Dawn.

While the show wasn't released to incredible ratings and only ran for two full seasons, it has a firm place in the TV comedy pantheon and for many of us is the kind of comfort blanket we're craving during these difficult times. With that in mind, here's how to stream The Office UK online and watch it wherever you are right now.

How to watch The Office UK from outside your country

The Office UK is now something of a vintage comedy, but despite that it's only available on one or two services in most countries where the show is popular. This means that anyone wanting to watch it online may find themselves unable to when abroad, due to pesky geo-blocking restrictions. While we're aware that most people aren't going anywhere in the immediate future, global travel will one day resume and, god forbid, you may even be stuck away from home right now for a variety of reasons.

Fortunately, there's an easy solution to geo-blocking. Downloading a VPN will allow you to watch The Office UK no matter where you are. This simple bit of software changes your IP address so that you can access episodes on demand just like you would at home. 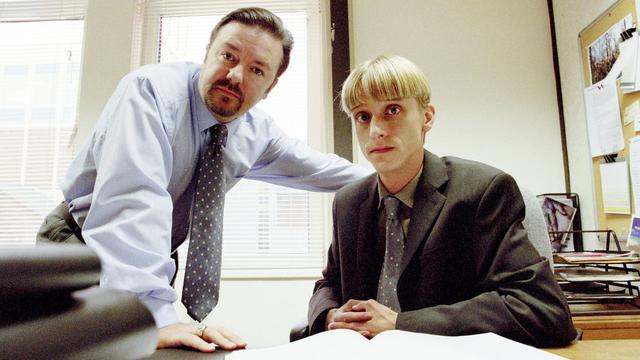 While there are hundreds of VPNs to choose from, we always recommend ExpressVPN. As well as being fast, simple, and straightforward to install, it's also compatible with a whole host of devices - Amazon Fire TV Stick, Apple TV, Xbox, PlayStation, iOS and Android to name some of the main ones.

Plus, ExpressVPN's flexible 30-day money back guarantee is difficult to argue with. Even better, you can purchase an annual plan for a 49% discount and 3 months extra FREE – a brilliant offer for an essential bit of software.

Once installed, select the location of your home country and simply click connect. You’ll then be able to easily stream The Office UK online from pretty much anywhere in the world.

How to watch The Office UK in the US for FREE

The Office UK is hugely popular in America and the import is fantastically cheap and easy to find online.

While it was tragically taken off Netflix earlier in the year, every episode is available to stream as part of its superb value $5.99 base plan - there's even a FREE 1-month trial so you can check out everything the excellent cord-cutting service has to offer on the house.

Another option readily at your disposal is BritBox, which also offers a free trial, costs just $6.99 a month, and offers fans of cringe comedy plenty more great series including Peep Show and The Inbetweeners.

Remember, as per our guide above, if you find yourself out of the country, you can use clever software like ExpressVPN to tune back into your US streaming service of choice and watch away just like you would on your couch.

As a British show, it's no surprise that it's easy to watch The Office in the UK. The first stop for most will be Netflix, where subscribers can watch every minute of every episode.

Elsewhere, Sky subscribers will find it baked into the service's on-demand catalogue, but you need to a look a little harder if you're not a customer.

Of these, the best for those who don't like committing to expensive TV packages is Now TV. Sky's affordable streaming offshoot offers both seasons of The Office UK, plus the two Christmas specials, through its great value Entertainment Pass. Costing just £8.99 a month, it also offers a FREE 1-week trial - more than enough time to comfortably binge on the The Office UK without paying a penny.

Beyond that, you can also buy The Office UK from Amazon Prime Video. It costs £3.99 for seasons 1 and 2, and £2.99 for 'season 3' (the two Christmas specials) - meaning you can buy the entire Office UK catalogue for £11. If you want to watch it a more leisurely pace, this is a great value option as for only £2 more than a NOW TV month pass, you get the ability to watch The Office whenever you want.

Remember, as per our guide above, if you find yourself out of the country, you can use clever software like ExpressVPN to tune back into your UK-based services just you would at home.

How to watch The Office UK online in Australia

Transporting yourself to deepest, darkest Slough from Down Under is easy thanks to streaming service Stan.

It offers the two main seasons of The Office UK and can be had from just $10 a month.

There's even a FREE 30-day trial on offer so you can check out everything it has to offer - among other things, it's the exclusive Aussie home of everything from RuPaul's Drag Race and Billions to City on a Hill, Will & Grace, and The Loudest Voice.

If you happen to be going abroad and are worried that geo-blocking will stop you from watching the shows you normally would at home in Australia, don't worry - just use a VPN and you'll be able to stream as usual.

How to watch The Office UK online in Canada

Canadians wanting to watch The Office UK can catch every cringe moment online on Netflix, where seasons 1 and 2 are on offer, as well as the Christmas specials ( sometimes thought of as 'season 3').

Not got Netflix, they're also cheap to buy on Google Play if you can't wait.

Anyone from Canada who finds they can't watch The Office UK when abroad due to pesky geo-blocking restrictions is reminded that by using a VPN, they can stream just like they would from the Great White North.

Is The Office on Netflix?

As we've just said, both full seasons of the The Office UK are available on Netflix UK and Netflix Canada right now.

The show was pulled off Netflix US earlier in the year and isn't on Netflix Australia at present, so only Canadian and British Netflix subscribers luck out for this one.

Anyone from either of those countries wanting to watch their local service abroad, just like they would at home, need only use a reliable VPN to do so.