How to watch Meghan and Harry Oprah interview

If you missed watching Meghan and Harry Oprah interview, you're in luck — CBS is rebroadcasting the TV event of the year Friday night. And even if you can't catch the rerun, the interview is still streaming online and we've all all the info you need to find it.

The highly-anticipated two-hour CBS special originally aired March 7 and featured Prince Harry and Meghan Markle discussing their split from the British royal family. And as talk show queen Oprah Winfrey said about it beforehand, "There is no subject that's off limits." The hype turned out to be true, as Meghan and Harry spilled all sorts of royal tea about facing racism and mental health issues.

The interview was broadcast in the UK by ITV Monday and is still generating headlines in Harry's home nation. Weirdly, though, the Meghan & Harry Oprah special wasn't available on-demand on Paramount Plus, though the new streaming service will be airing tonight's rerun.

During the interview, Duchess of Sussex confessed that she had had suicidal thoughts during her pregnancy, saying she found life within the British Royal Family so difficult that at times she "didn't want to be alive anymore." She also revealed that a royal family member relayed "concerns" about what skin color their son, Archie, would have when he was born.

She also said the royal institution played "an active role ... in perpetuating falsehoods about us" and corrected a false headline accusing her of making Kate Middleton cry. Instead, Meghan said it was the opposite — the Duchess of Cambridge induced her to tears in the lead-up to Harry and Meghan's wedding (she later apologized).

According to the BBC, the interview led to "crisis meetings involving senior royals." Queen Elizabeth II issued a statement that said "the whole family was saddened to learn the full extent of how challenging the last few years have been for Harry and Meghan" and that "the issues raised, particularly that of race, are concerning." She also said, "While some recollections may vary, they are taken very seriously and will be addressed by the family privately." 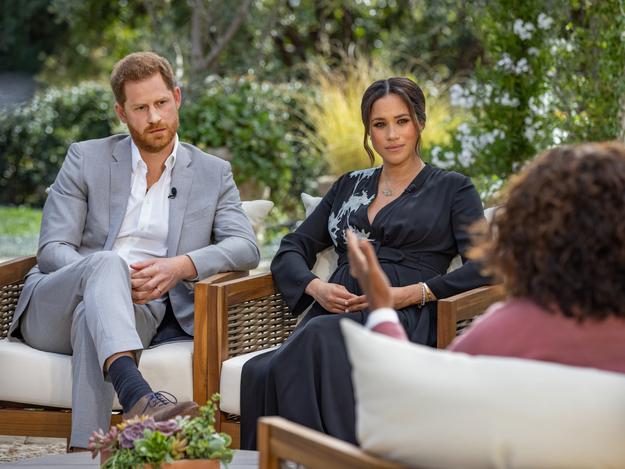 If you missed the Meghan and Harry Oprah interview and want to stream it online or catch the repeat broadcast, we've got all the details for you below.

American viewers can watch a repeat of the Oprah With Meghan and Harry interview on Friday, March 12 at 8 p.m. ET on CBS — which you get with a cable TV package or one of the best TV antennas.

The interview rerun will also stream via your local CBS affiliate on Paramount Plus, which is offering a free, month-long trial to check out the new streaming service.

Fubo.TV is a great alternative to a cable package. With the Family Plan ($65 per month), you get over 120 channels, including all the local broadcast networks and top cable brands like Lifetime, AMC, E!, HGTV, FX, ESPN, Syfy and Paramount Network.

Paramount Plus is offering a free trial lasting a month, so you can check out all that the new streaming service has to offer. It carries live CBS feeds in addition to housing a library with everything from blockbuster movies to classic comedies to originals like Star Trek: Picard.

If you can't watch the Meghan and Harry interview rerun, don't worry! It's also streaming online via the CBS website. It's entirely free to watch and doesn't require any login or account — simply click the big "Watch now" button on the homepage.

That won't work if you're not in the U.S., but fortunately it's easy for anyone to watch the Meghan and Harry interview online wherever they are in the world, simply by using a VPN service.

How to watch the Meghan and Harry Oprah interview anywhere, with a VPN

Just because CBS isn't available everywhere doesn't mean you need to miss the Oprah With Meghan and Harry interview. Watching along with the rest of the internet can be pretty easy. With the right VPN (virtual private network), you can stream the show from wherever you go.

We've evaluated many options, and the best VPN is ExpressVPN. It meets the VPN needs of the vast majority of users, offering outstanding compatibility with most devices and impressive connection speeds. It's also affordable at $12.95 per month. (Signing up for longer periods of six months or a year reduces the cost even more.)

Our favorite VPN service, ExpressVPN, really shines thanks to its safety, speed and simplicity-to-use. It's also compatible with loads of devices - from iOS and Android to Roku, Apple TV and PlayStations. You'll even get an extra 3 months free if you sign up for a year, or there's a 30-day money-back guarantee if you just want to give it a try.

How to watch the Meghan and Harry Oprah interview in Canada

Canadians can watch the Oprah With Meghan and Harry interview repeat on Global TV at 8 p.m. ET.

The Oprah With Meghan and Harry interview isn't repeating on ITV, but that's OK because you can catch-up via the ITV Hub.

You'll need to sign in (for free) to be able to watch it, and it won't work outside of the UK unless you access the site using one of the best VPN services such as ExpressVPN.

How to watch the Meghan and Harry Oprah interview in Australia

In Australia, the Harry and Meghan interview aired on Network 10 and is now streaming on the 10Play on-demand site.

Who are Meghan Markle and Prince Harry?

Not that these two people really need an introduction, but we'll briefly summarize the situation. Prince Harry is a grandson of Queen Elizabeth II, the younger son of Prince Charles and the late Princess Diana and the brother of Prince William. In 2018, he married former actress Meghan Markle, best known for starring in the legal drama Suits. A year later, they welcomed their first child, Archie.

In early 2020, Harry and Meghan announced they were stepping back from their roles as senior royals, moving out of England and working to become financially independent. Since then, they've settled in the Los Angeles area, signed deals with Spotify and Netflix and are now expecting a baby.

Their split from the royal family was recently cemented and Prince Harry went on James Corden's late night show to talk about the toll that racist, toxic media coverage took on their mental health. One subject that isn't covered in the pre-taped interview is the Palace's recent decision to open an investigation into claims that Meghan bullied staff members.