Fitness trackers aren’t for everyone. They deliver neat insights into your health and overall activity levels but, for many people, even the best-looking tracker doesn’t offer the appeal of a good old-fashioned watch with real moving parts.

Garmin’s Vivomove HR is one of a growing list of hybrid smartwatches that aims to fix this by bringing fitness-tracking features to the world of traditional wristwatches. It’s a watch you can wear wherever you go with a pared-down design that looks great, whether you’re wearing it in the gym kit or on an evening out.

Don’t be fooled by that low-key design, though. The Vivomove HR packs in far more than mere step and calorie counting. It logs your heart rate and stress levels throughout the day and sleep quality when you wear it at night. Thanks to its built-in altimeter, it will also keep tabs on how many stairs you climb.

And that’s just the start. The hybrid watch’s hidden OLED screen also displays smartphone notifications and lets you control music playback on your phone. And it has sports tracking, too, allowing users to manually log walks, runs, weightlifting and cardio workouts. If you forget, it’ll detect them automatically via Garmin's Move IQ technology.

Last, but by no means least, the Vivomove HR estimates your VO2 max and can also be used to broadcast your heart-rate via ANT+ to compatible devices during workouts. Although the watch is waterproof to 50m, though, sadly it doesn’t offer swim tracking or have GPS.

That’s a solid feature set for a device that's come down from its £170 launch price to a mere £150. That’s for the Sport version, which is made largely from plastic. If you like the idea of a stainless steel watch, Garmin also makes a Premium model of the Vivomove HR, which costs £230.

As far as other hybrid watches are concerned, the Vivomove HR’s main competition comes from the Withings Steel HR (£160) and Withings Steel HR Sport (£200). As their names suggest, both models are made from stainless steel but their fitness features are slightly more basic, with no stress tracking and less frequent heart-rate sampling.

The Sport Vivomove HR holds the advantage of being considerably lighter than Premium version, tipping the scales at 40.8g including its silicone strap and 26g without it. That’s two grams lighter than the lightest smartwatch I’ve tested in recent memory – the Fossil Sport.

Thanks to its lightweight design, though, and the totally flush optical heart-rate sensor on the reverse, the Vivomove HR is among the most comfortable wrist wearables I’ve tested. If you want something you can keep on day and night, it fits the bill much better than most of Garmin’s chunkier sports watches. When using it to track my sleep, I never once woke with the urge to take it off, as I have with many other wearables.

And that’s not all the Vivomove HR does well. It’s also a great looking watch, at least to my eyes. I was sent the black model and although it’s undoubtedly more Swatch than Rolex as far as design ethos is concerned, that’s no bad thing. There are no physical buttons to clutter up the look, just a minimalist black watch face accompanied by two hands.

So what about the display? So pared down is the Vivomove HR’s design that it’s not obvious it even has a digital display at first glance. It’s only when you firmly double tap the screen or lift your wrist that its small 9.6 x 19.2mm panel springs to life and the watch’s hands move smoothly around to the ten and two o’clock positions to avoid obscuring the interface. This is a really neat feature and undoubtedly the thing I was most keen to show off to my colleagues when they asked about the watch.

As for the display, although it’s one of the smaller touchscreens you’ll find on any smart smartwatch, it works well for the most part. Like Garmin’s Vivosport tracker, you have to tap one side of the display to step back a screen, which can feel fiddly, but it’s responsive to taps and swipes and the interface is clear enough that you can quickly work out what you’re doing. 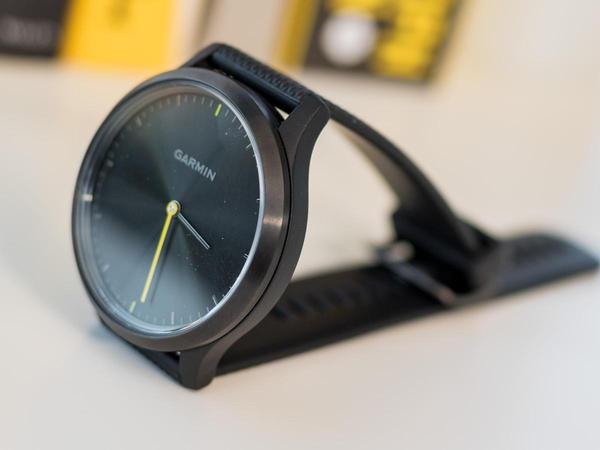 Having said that, I can’t help but feel the Vivomove HR would benefit from a single physical button such as the one on the Garmin Vivoactive 3. Long-tapping and double-tapping the watch’s screen to open the app list and start an activity feels a bit clunky and having a button would surely make this quicker and easier. It would also stop the screen from being smeary from fingerprints, which can be a bit of a problem.

Still, you can get to most of what the Vivomove HR does with only a few swipes. From the main screen, which shows the time and date, swiping left rings up your core metrics, including step count, staircases climbed, intensity minutes, calories burned, heart rate and stress. Among these, there are also screens for music control, weather and notifications.

Tapping any of these displays typically reveals a deeper layer of information. In most cases, this means the watch shows you your stats for the previous day, but with the weather app, for example, it lets you check the forecast for the next few days.

To manually log an activity, enable do not disturb, check your VO2 max or use find my phone, among other functions, you need to long-press the display. The watch lets you record walks, runs, cardio and weights sessions manually. Sadly, though, there’s no GPS and no apps for swim tracking or cycling.

The latter two are both recognised by Garmin’s Move IQ auto-detection feature, at least, but the benefit to logging activities manually is that there are many more details to pore over when the watch syncs to the Garmin Connect mobile app.

After a run, for example, the app delivers estimates on distance, pace and calories burned as well as displaying a chart for your heart rate during the workout. The distance and pace numbers logged by the Vivomove HR were a little over what they should have been but if you’re running on a treadmill you can easily edit it to match the real figures. On some watches, this edited info would be used to recalibrate future estimates, but it’s unclear if the Vivomove HR works in this way.

As for heart-rate accuracy, this was a bit of a mixed bag. During a treadmill run, the numbers were mostly bang on what I’d expect them to be. However, on a crosstrainer, I had much less luck and the Vivomove HR only started logging realistic heart-rate data after the first five minutes of exercise. At four minutes in, for instance, it was showing a pulse of only 80bpm.

It’s a shame there’s no connected GPS as you have on the Withings Steel HR Sport but part of me wonders if this is a deliberate decision by Garmin to keep its lifestyle products and more serious sports wearables separate. At last Garmin’s TrueUp continuity feature allows you to switch seamlessly from this to something more capable – the Fenix 5 Plus, for instance.

Indeed, providing your other device supports TrueUp, it will sync information such as steps, calories burned, intensity minutes and floors climbed between the devices. That’s perfect if you want to leave your bulky Fenix 5 Plus behind and wear the Vivomove HR for an evening out, knowing all your fitness metrics are still only a swipe away.

With limited screen space to display stats on the watch itself, though, you’re still better off looking at insights into your health and activity on the Garmin Connect smartphone app. On its home screen, it has a well-presented summary of all your data for the day, including heart rate, steps, floors climbed, stress and sleep. Swipe further up and it also displays your health stats and workouts for the last week.

If even this comprehensive selection of data leaves you wanting more, you can drill down further into any particular area by tapping. From its sidebar, Garmin Connect also organises your personal data by major categories, including activities, health stats, performance stats and more.

One perk of the Vivomove HR’s tiny display, at least in theory, is that it should last much longer than smartwatches with larger OLED screens. However, although Garmin’s estimate of five days in smart mode is considerably more than you’ll achieve with an Apple Watch 4, it’s still some way behind its immediate rivals.

The Withings Steel HR Sport has an advertised 25-day battery life, for instance, while Garmin’s Vivoactive 3, which uses an always-on transflective display, lasts seven days between charges. However, as you’d hope for a watch with analogue hands, the Vivomove HR also has a low-energy mode that it reverts to when the juice is running low. In this mode, which extends battery life for up to two weeks, the hands continue to display the time but both the OLED screen and tracking features are disabled.

Slightly underwhelming battery life isn’t reason enough to not buy the Garmin Vivomove HR, however. If you’re looking for a hybrid smartwatch that logs your steps, sleep, heart rate and stress in a package that both looks great and is fairly priced, it’s an obvious choice.

Thanks to Garmin’s TrueUp tech, it’s an even easier decision to make if you own another Garmin device for running or cycling and want something more lightweight and comfortable for everyday wear. The flip side to that argument, of course, is that if you need just one watch that does it all, the Withings devices hold the advantage.

The Steel HR, which is around the same price, can log activities via connected GPS and crucially, lasts up to 25 days between charges. Which is the right watch for you, then, probably comes down to personal preference.