Last week, it emerged that Garmin could bring ECG functionality to the Venu 2 Plus, one of its latest smartwatches. Additionally, a United States Patent and Trademark Office (USPTO) filing appeared to confirm last month that the company was also developing a solar-powered smartwatch with an OLED display.

However, it turns out that Garmin has registered another patent with the USPTO, as discovered by TechRadar. According to the website, the second patent describes reducing the cost of producing OLED displays. In short, Garmin hopes to use as few materials as possible to produce these panels for smartwatches. Apparently, Garmin will improve the efficiency of photovoltaic regions between OLED sub-pixels. If the company can achieve this, it would not need to use thicker metal electrodes or a gold layer to improve connectivity.

TechRadar adds that Garmin could also combine these more efficient OLED displays with its solar charging technologies, which it reserves for its transflective memory-in-pixel (MIP) displays. Currently, it is unclear when or whether Garmin will make this technology commercially available. The two patents that have recently appeared suggest that the company is working towards something, though. 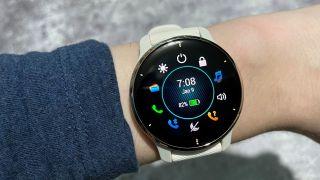 Purchase the Garmin Forerunner 945 on Amazon

Working For NotebookcheckAre you a techie who knows how to write? Then join our Team!Wanted: German-English-Translator (English native speakers preferred)Details here

SurveyJoin our Support Satisfaction Survey 2022: We want to hear about your experiences!Participate hereThe Garmin Venu 2 Plus could soon have an ECG function03/15/2022Ducati reveals the Futa, a new electric road bike with Garmin technology03/11/2022The ElegaBand will allow you to wear your Apple Watch, Samsung Galaxy Watch or Garmin smartwatch in new ways03/08/2022Garmin Descent G1 and Descent G1 Solar launched for divers and smartwatch fans03/04/2022Garmin is working on a solar-powered smartwatch with an OLED display02/26/2022The Garmin D2 Air X10 Smartwatch has launched with SpO2 sensor, plus a host of aviation and fitness features02/11/2022Garmin intros the Instinct 2 rugged GPS smartwatch02/10/2022Garmin's website leaks the Forerunner 955 smartwatch with an LTE modem01/25/2022

static version load dynamicLoading CommentsComment on this articleTesla's Elon Musk says new manganes...Insta360 ONE RS: New action camera ... Alex Alderson - Senior Tech Writer- 5341 articles published on Notebookcheck since 2018Prior to writing and translating for Notebookcheck, I worked for various companies including Apple and Neowin. I have a BA in International History and Politics from the University of Leeds, which I have since converted to a Law Degree. Happy to chat on Twitter or Notebookchat.contact me via:@aldersonajPlease share our article, every link counts!
Tags:  will smart watch get cheaper next year