Further evidence that powerful magnets in some Apple iPhones can interfere with cardiac implantable electronic devices (CIEDs) comes from a small study that also suggests some devices are more susceptible than others.

The iPhone 12 Pro Max with MagSafe technology interfered with CIEDs implanted in three consecutive patients presenting to an electrophysiology lab and in eight of 11 implantable cardioverter defibrillators (ICDs) and pacemakers (72.7%) still in their original packaging.

The results, published in the Journal of the American Heart Association, are consistent with a widely publicized single-patient report this February and evidence of electromagnetic interference with fitness wristbands and e-cigarettes.

The MagSafe technology supports wireless charging and is optimized by a ring-shaped array of magnets. Although magnet mode activation has been shown to occur in CIEDs with exposure to a magnetic field as low as 10 gauss, the field strength of the iPhone 12 Pro Max can be greater than 50 G when in direct contact, the researchers determined.

"If this becomes a standard in a lot of the new smartphones or companies start to use stronger magnets...then we will see more and more of these consumer electronic and device interactions," senior author Michael Wu, MD, Brown University, Providence, Rhode Island, told theheart.org | Medscape Cardiology.

In a May advisory on these device interactions, the US Food and Drug Administration also cautioned that the number of consumer electronics with strong magnets is expected to increase over time.

That trend appears to be already underway, with Forbes reporting in February that the MagSafe batteries will be "getting stronger" as part of upgrades to the iPhone 13 and Bloomberg reporting in advance of Apple's annual developers conference this week that an upgraded version of MagSafe is in the works to support wireless charging for its iPad. MagSafe has not been used previously in iPads.

Although Apple has acknowledged that the iPhone 12 contains more magnets than previous iPhone models, it says "they're not expected to pose a greater risk of magnetic interference to medical devices than prior iPhone models." The company maintains a page that specifically warns about the potential for interactions and advises consumers keep the iPhone and MagSafe accessories more than 15 cm (6 inches) away from medical devices.

Older-generation iPhones have not shown this risk, with only one case of interference reported with the iPhone 6 and an Apple Watch in 1352 tests among 148 patients with CIEDs and leads from four different manufacturers.

In the present study, magnet reversion mode was triggered in all three patients when the iPhone 12 Pro Max was placed on the skin over the device.

The Boston Scientific V273 Intua CRT-P device, however, "appeared to be less susceptible as we were only able to elicit transient temporary asynchronous pacing but no sustained response by the iPhone 12 Pro Max magnet," Wu and colleagues note. 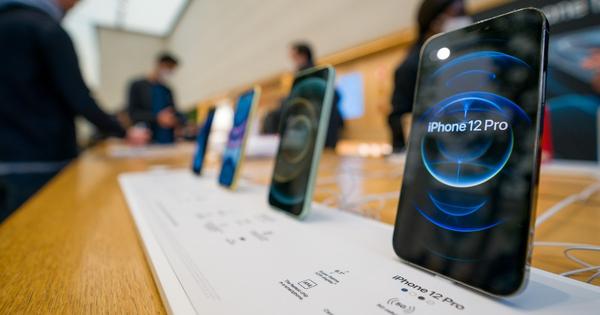 Boston Scientific devices again "appeared to be less susceptible, as no clear magnet interference" was noted in the Dynagen ICD, Emblem MRI S-ICD, or Accolade MRI pacemaker, Wu reported. There was temporary asynchronous pacing but no sustained response in the company's U125 Valitude pacemaker.

Using the Medtronic Visia AF MRI ICD, the researchers found that the iPhone 12 Pro Max was able to trigger magnet reversion mode at a distance up to 1.5 cm (0.6 inch) from the anterior aspect of the device ex vivo.

The difference in magnet response to the iPhone 12 Pro Max among the different devices is likely due to different hall-sensor magnet sensitivity, as all of the devices were susceptible to a standard donut magnet, Wu noted. Boston Scientific's Accolade MRI pacemaker, for example, requires a magnet stronger than 70 G to activate magnet mode, according to the product manual.

"Even so, sometimes with our test, we were able to trigger a brief response," he said. "The response isn't as lasting as some of the other companies but with the small sample size, I can only speculate and suggest that maybe it's possible. But we always want a formal study through the company or other agencies to really pinpoint which company has more susceptible devices."

As to whether manufacturers should build CIEDs less susceptible to today's stronger magnets, Wu said it's worth exploring but there are pros and cons.

Although magnets in consumer devices have the potential to inhibit lifesaving therapies, a magnet is also very useful in certain medical settings, such as a quick way to ensure pacing without worrying about electrocautery noise during surgery or to deactivate a defibrillator if there's noise resulting in inappropriate shocks.

"It would require an overhaul of a lot of the devices going forward and I think that's something that's worth exploring, especially now that a lot of devices are using wireless communication, Bluetooth, and other communication technology," he said.

Even though the study is small, Wu said, it does represent many of the available devices and has clinical implications, given that people often put their smartphones in a breast pocket.

"This report highlights the importance of public awareness regarding an interaction between CIEDs and a recently released smartphone model with magnetic charging capability," Wu and colleagues conclude.

Apple was contacted for comment but had not responded at press time.

The authors reported no study funding or relevant conflicts of interests.