The best cheap smartwatches can help you stay connected without having to spend much for something you wear on your wrist. As with the best smartwatches, these budget models offer such features as smartphone notifications and some fitness tracking capabilities, such as GPS and heart rate monitors.

Several of the best cheap smartwatches are simply older versions of other models. So while they might not have all the latest features — their screens might be a bit smaller, and some of their sensors not as sophisticated — they were considered the best smartwatches when they first came out, and are still quite good.

See all of the best cheap smartwatches below.

What is the best cheap smartwatch?

The best cheap smartwatch overall is the Apple Watch Series 3. With a starting price of $199, it's at the high end for a cheap smartwatch, but has the most to offer when it comes to apps, notifications, fitness tracking, and more. Plus, the Apple Watch 3 has Apple Pay built in, so you can use it to purchase items without having to touch anything. You'll need an iPhone if you want to use it, but you'll get the latest watchOS 8 that released with the Apple Watch 7.

Looking for the best cheap smartwatch under $100? Look no further than the Amazfit Bip, which costs just $70, yet has a heart rate monitor, GPS, and more. Also check out our guide on should you buy an Amazfit watch for more on that brand.

The best cheap smartwatches you can buy today

The 38mm Apple Watch Series 3 with GPS is the best cheap smartwatch for most iPhone owners. The watch integrates seamlessly with the phone, so you can easily view notifications and respond to messages directly on the wrist. The Series 3 also has many of the same fitness-tracking and heart-health features that we love about the higher-priced Apple Watch 7 and Apple Watch 6 before it.

The more affordable Series 3 can passively monitor your heart rate and send you a notification if it detects an irregular heart rhythm. It also benefits from the watchOS 8 software update, which brings new watch faces, sleep tracking and support for more workout styles like all the other best Apple Watch models.

This $35 smartwatch will surprise you

-Not as accurate as top-end fitness trackers

The Letsfit Smartwatch is the most budget-friendly option that still gets you the features you care about. It packs a built-in heart rate monitor, notification support for everything from incoming phone calls to Snapchat, and is actually slimmer and more lightweight than its high-end counterpart, the Apple Watch 6. 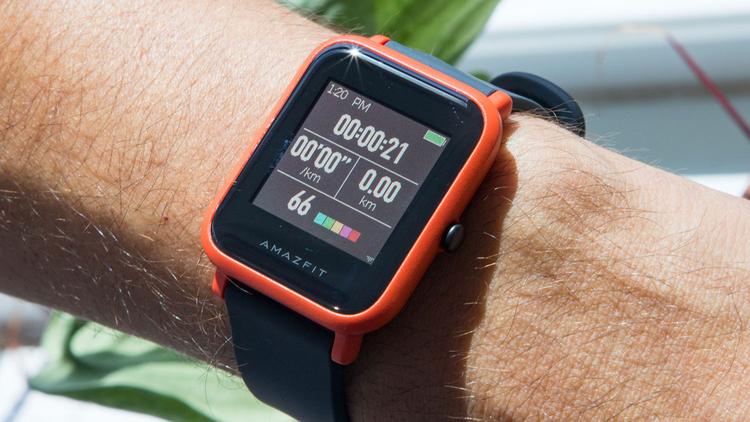 If you're just looking for casual fitness tracking and basic smartwatch features, the ID205L might be the deal for you. It's not the most accurate activity tracker but it's not terrible, especially if you use it in conjunction with another device—such as your phone, which you'll need anyway for GPS connectivity.

The only downside: The Galaxy Watch Active doesn't have many well-known apps, especially compared with the Apple Watch. Luckily, Samsung's built-in apps, including its fitness-focused options, are more than capable of handling most tasks. We'd still consider it one of the best Samsung watches.

Samsung also offers the Galaxy Watch Active 2, which comes in two sizes and includes LTE connectivity and an ECG sensor that will eventually be able to detect atrial fibrillation. However, that watch is more expensive, starting at $279.

The best cheap smartwatch for sleep-tracking

The Fitbit's Versa 2 makes slight tweaks on the original Versa, including an AMOLED display and built-in Alexa. Fitbit's smartwatch offers all of the features we liked in the original Versa, such as accurate heart-rate tracking, lengthy battery life, colorful touchscreen display and in-depth sleep analysis. That's why the Versa 2 made it to our best cheap smartwatch list and is one of the best Fitbit devices you can still buy.

This Versa doesn't have onboard GPS like the newer Fitbit Versa 3, which would make it a more capable Apple Watch rival, and its app store isn't as well-stocked as Apple's. But with five-day battery life, cross-platform compatibility, an affordable price and sophisticated sleep-tracking features, the Versa 2 is a solid smartwatch for most people.

The most fashionable smartwatch under $200

The Garmin Lily is a small and stylish smartwatch that will make you forget the bulky GPS wearables the brand is best known for. A fashionable offering designed with first-time, female smartwatch users in mind, the $199 Garmin Lily is a gamble for the company that's paid off.

In addition to a small and barely-there feel, the display is accentuated by a patterned lens that somehow doesn't obstruct the content you'd want to see at a glance. Of all the best Garmin watches, even the previous lifestyle model attempts made by the company, this one looks the most like actual jewelry.

Fossil is one of the most prolific Wear OS smartwatch brands, with dozens of models and styles. At $99, the Fossil Sport is one of the least expensive, yet most stylish smartwatches around. While it debuted in 2018, it runs the most current Qualcomm 3100 processor. Plus, it has GPS, a heart-rate monitor, NFC for mobile payments, and Wi-Fi. It's available in multiple colors, and its band is easily replaceable.

Wear OS has evolved a good deal since its launch, but it still has a few things we think could be improved, especially when compared to Apple's Watch OS. We also don't recommend a Wear OS smartwatch for iPhone owners, as you simply can't do as much as you could if the watch was paired with an Android phone.

Another great cheap smartwatch under $100

The best cheap smartwatch under $100, the Amazfit Bip is a stylish touchscreen watch with smartphone notifications, lengthy battery life and built-in heart-rate monitor, GPS and GLONASS for accurate workout tracking. Cheap heart-rate-tracking devices are notoriously unreliable, but we put the Bip to the test and found it to be almost as accurate as our Garmin Forerunner.

You can eke out 45 days of battery life from the Bip without using any of its smart features, but even using the heart-rate monitor and GPS to track workouts, we went two weeks before the watch dipped below 50 percent. That's incredible for a smartwatch. The Bip's 1.28-inch, 176 x 176-pixel color screen isn't stellar, but the always-on display is useful for using the watch as, you know, a watch.

The one downside: The Bip lacks an app store, so it's not really playing in the same field as the Apple Watch, Samsung's Tizen OS watches, Fitbit's Ionic and Versa, or Wear OS smartwatches from companies like Fossil and LG. But that's a small price to pay for such a bargain.

The Fitbit Versa Lite is one of the best cheap smartwatches on the market and offers many of the same features that make the Versa our favorite mainstream smartwatch. It's also more colorful than its higher-priced siblings, with Marina Blue and Mulberry Plum options alongside a classic silver with colorful bands.

But the Versa Lite also sacrifices some of the features that make the Versa so well-rounded, including swim tracking and onboard music storage. If those features are less important than price, the Versa Lite is worth buying for the battery life and solid fitness tracking.

A cheap smartwatch with GPS

The Ticwatch E (for Express) is a simple, fitness-focused Wear OS watch that impresses with built-in GPS and GLONASS for more accurate run tracking. It has a comparatively large 1.4-inch display with a 400 x 400-pixel resolution, good for a sub-$200 device. We also love the band on the Ticwatch E, which is interchangeable if you prefer a less sporty look.

It offers the usual smartwatch features, though, as with all Wear OS devices, you'll get more from pairing it with an Android phone than an iPhone, because then you can answer calls and texts from the watch. The Ticwatch doesn't have an LTE connection, so it relays those calls and texts from your phone.

With a large display, on-board GPS, built-in compass and enough durability certifications to survive Jurassic Park, the Amazfit T-Rex one of the best cheap smartwatches ever made for the outdoors. At $140, it’s less than half the price of the Garmin Instinct and other popular GPS smartwatches, making it an affordable alternative.

Like other devices on our best sports watch page, the T-Rex offers an impressive battery life, variety of sports modes and sleep tracking – all wrapped in its impenetrable shell. With all the sensors you could want, the T-Rex is a beast to be reckoned with, plus who doesn't want a device named after a dinosaur?

How to choose the best cheap smartwatch for you

If you have an Android smartphone, your best choice is either a Samsung or Wear OS smartwatch; both of those platforms fully support Android phones, such as making and receiving calls from your wrist, as well as crafting messages. Wear OS has a much larger app library than does Samsung's Tizen-based operating system, but we prefer the interface on Samsung's smartwatches, and they tend to have much longer battery life.

After that, you want to find a smartwatch that best fits your wrist or style. You have the most options with Wear OS, as many of Fossil's brands—Diesel, Kate Spade, Michael Kors, Misfit, Emporio Armani, and more—all have their own smartwatches, with a multitude of styles, bands, sizes, and more. Both Apple and Samsung offer far fewer options in terms of style and size.

You also want to consider what you plan to do with the smartwatch. If you're into fitness, you'll want a smartwatch that's water-resistant and has GPS and a heart rate monitor.

How we test cheap smartwatches

We test cheap smartwatches the same way we do pricier models: By wearing them. We first see how well the watches fit on our wrists, and how easy the displays are to read (especially in sunlight and navigate. Depending on its capabilities, we also test the watches' sensors, such as GPS and heart rate monitors. If you need a watch that can track your workouts without your phone, check out our guides to the best GPS watches and best running watches instead.

Other criteria that factor into our ratings include the number of apps available for a smartwatch, how well it interacts with our smartphone, and battery life. In all of this, we also take into account the price of the smartwatch. The less a watch costs, the more leeway we're inclined to give it. Still, there are a lot of lousy cheap smartwatches — and plenty of good ones under $200 — so our tolerance only goes so far.