With composting, Californians can take climate change into their own hands

LOS ANGELES -- Teresa Leong had known for years that her kitchen scraps weren't really trash. But at first, she wasn't sure what to do with them.

Sometimes she'd just toss a bell pepper into the bushes, figuring it would decompose and feed the greenery. But that wasn't a comprehensive solution. Then she tried washing unused veggies down the drain, knowing they'd be converted to reusable gas at the city's sewage treatment plant. But massive downloads of greens, even ground up in a blender, clogged the drain in her Studio City apartment.

Another round of "aggressive Googling" led Leong to a group called L.A. Compost and the start of a life-changing conversion that began — naturally enough — with broccoli stems, coffee grounds and banana peels. In the summer of 2019, this millennial with a mind for climate science and a heart for humanity delivered those leftovers to the nonprofit's booth at the Atwater Village Farmers Market.

"Finally, after a bunch of trial and error, I found a resource that could help someone living in an apartment to successfully compost my food waste," Leong recalled. "It was sustainable and practical. ... It was a start."

The pandemic that got some people knitting and others remodeling their homes drove others to plant vegetable gardens and to reconsider their relationship with food, including leftover fruits and vegetables. They might feel powerless against global climate change, but at least they can keep onion skins and carrot peels out of the landfill, where they would turn into methane, a potent, heat-trapping gas.

And it's not just affluent do-gooders with $300 designer compost bins who are popularizing the movement. From South L.A. to the San Fernando Valley, people are getting their hands dirty with mulch.

For Leong, saving food scraps was just a start. The 33-year-old Hollywood special-effects artist was soon taking composting Zoom classes, learning about gardening and more. Composting became bigger than itself: a gateway to friendships, to community, to the wonders of the natural world and a clandestine activity she calls "guerrilla gardening."

Farmers have long understood that returning uneaten plants and vegetables to the earth replenishes nutrients in the soil. Only in recent decades have scientists shown that food scraps processed into compost and spread on fields also can be beneficial for "sinking" Earth-warming carbon dioxide back into the ground.

California made reprocessing of food waste mandatory this year. When SB 1383 became law Jan. 1, every city and county was obligated to offer a way for residents and businesses to separate leftover food from the rest of their trash. The scraps and other organic material, like yard trimmings, make up about half of the "garbage" previously hauled to landfills, according to CalRecycle. That created enough gas to make landfills California's third-largest methane source.

While the city of Los Angeles finalizes its plans for separate curbside pickup of food waste, organizations such as L.A. Compost have provided an alternative for the environmentally conscious. The organization got its start in 2012, with brothers Michael and David Martinez and their family and friends using bicycles (fitted with cargo trailers) to collect leftover food.

From its roots in the east San Gabriel Valley, L.A. Compost migrated to northeast Los Angeles.

Michael Martinez decided that bicycle pickups could not provide the scale of collection required in a region as vast as Los Angeles County, so the group began asking the public to leave food scraps at farmers markets and other "hubs," such as community gardens.

L.A. Compost now receives food scraps weekly at farmers markets in Atwater Village, Highland Park and Silver Lake and at another drop-off point in Elysian Valley. The group's goal is to have collection points at 20 markets by the end of 2023.

With the pandemic prompting all manner of lifestyle changes, composting has been a natural beneficiary, with drop-offs jumping at all L.A. Compost-supported locations, which include compost co-ops, schools, libraries and community gardens. Total collections of food scraps by L.A. Compost reached 804,000 pounds in 2021, nearly 70% more than in 2019.

The goal of the new state law is to reprocess 75% of all green waste by 2025. That means redirecting 17.7 million tons of organic material — equivalent to the weight of more than 9.5 million cars — away from disposal.

With that kind of volume, much of the greenery will be trucked long distances to industrial-scale composting centers. Environmentalists worry that all that truck travel will expand the very carbon footprint that composting aims to reduce. L.A. Compost operates on the premise that it's best to limit truck trips as much as possible and return organics to the earth closest to where they were consumed.

"If it's a resource from that area," Martinez said, "we think it's best to return it to the earth in that same area."

On another sunny Wednesday morning not long ago, Martinez worked alongside half a dozen volunteers and L.A. Compost employees turning an expansive heap of leaves, twigs, mulch and decomposing food. The pile was one of about a dozen beneath a stand of eucalyptus trees near the merry-go-round in Griffith Park. It is just one of the organization's "regional hubs," where food scraps begin their afterlife.

Cultures that remain close to the land understand the process so intuitively that they scarcely use a word for "compost," said Martinez, 34. "To them, it's just a different form of earth, so the feeling is, 'We must return it to where it came from.'" 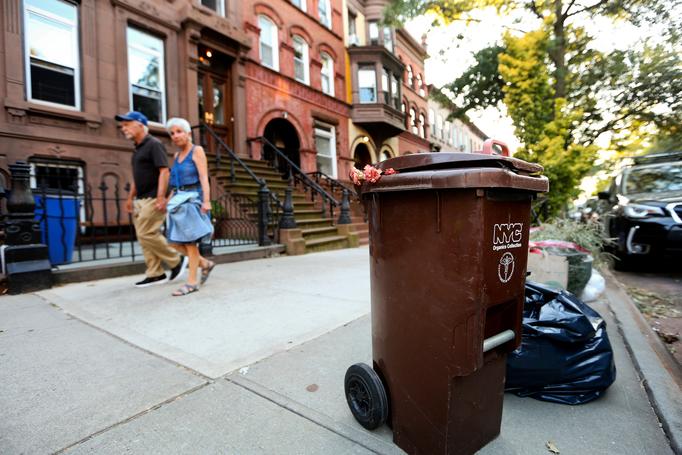 Growing up in West Covina, Martinez helped tend his family's vegetable garden and a compost pile. And his dad, who worked as an upholsterer, routinely recycled fabric.

"Now, most of us have been conditioned to see a piece of glass or aluminum as something that has a second life, something that has value," said Martinez, who taught high school before turning to compost full time in 2012. "Not everyone has had the opportunity to see food in the same light. We want to normalize this experience, so people see it that way."

L.A. Compost operates on a decentralized, non-hierarchical model, giving and receiving from multiple nonprofits and businesses. It's able to add sawdust to its mix because the sustainable company Angel City Lumber contributes its detritus. The organization partnered with the L.A. Department of Recreation and Parks to open the space at Griffith Park. Cottonwood Urban Farm in Panorama City offers space for another hub, in exchange for finished compost as part of the nominal rent.

The San Fernando Valley farm — squeezed between tract homes, a church and an American Legion post — is home, in turn, to Black Thumb Farm, a nonprofit that introduces mostly working-class Black and brown teenagers to farming and "food sovereignty," taking more control over the nutrients they put into their bodies.

"We know there is this incredible microbial network and food web under the ground," said Martinez. "How do we re-create that above the ground? We want to focus as much on the communities we're engaging with as the food scraps we're diverting."

Students filled one side of Cottonwood Urban Farm recently, as a high school teacher explained how to plant and maintain fruit trees. Nearby, Black Thumb Farm founder Alexys Romo picked peas with her father.

On the other end of the property, volunteers fed yard trimmings into a giant metal trommel, the rotating cylinder sifting out big sticks and other extras. Cottonwood owner Elliott Kuhn, scanning the scene, echoed Martinez: "It's organisms working together, not in isolation. Just like under the ground."

Leong grows animated describing how compost has enriched not just the soil but her life.

Her connection with L.A. Compost at the farmers market introduced her to Cottonwood, and soon she was enjoying communal work on Saturday mornings. Time at the farm offered a refreshing tonic to the long hours she spent in front of her computer screen for work.

In the San Francisco of her youth, her parents preferred shopping malls to the outdoors. Getting her hands in the dirt and the sun on her back felt like a rebirth.

"I remember seeing chard growing out of the ground at Cottonwood for the first time," said Leong with a smile, "and I was like, 'Oh, so that's what food looks like?' "

Others composters share such revelatory moments. Ana Covarrubias, who grew up on food stamps and processed food in South Los Angeles, thanked L.A. Compost for introducing her to the real food chain and healthier ways of eating. Like Leung, she became a "Compost Cultivator," taking the group's online courses on sustainability between her work for a company that sells natural foods.

"Every time I am in the garden," said the 24-year-old, "it feels really special."

James Ward, a 65-year-old retiree, dropped by Cottonwood one day to buy vegetables and has been a volunteer at the compost hub ever since, turning the piles and helping with new touches, like the placards that keep track of when beds have been turned and watered.

"Why do I stay here?" said Ward, whom everyone calls "Sweet" James. "The people. These people are so beautiful. And that's a good thing. A really good thing."

Leong loves that when she's at the compost center, she can talk about sustainability and the environment and not feel like an oddball. The group is facile with issues like recycling, buying food in bulk (without plastic bags or containers) and navigating how to get coffee shops to accommodate a mug, rather than a throwaway cup.

Late last year, the self-described tech nerd took her commitment to a new level. Just blocks from her house, Leong discovered an extended dirt path high above the concrete borders of the Los Angeles River. People use the stretch mostly for walking, running and exercising their dogs.

Others have taken a stab at greening the forlorn and mostly desiccated land. Someone planted a trumpet vine along a bridge and, nearby, a patch of garlic. It has started to flower at the bottom of a stairwell. Thirty yards down the way, a tree has gone in.

Inspired, Leong brought her camping shovel, a bag of compost and a container of water, along with a handful of pumpkin seeds.

"If someone had told me five years ago, 'You're going to be doing guerrilla gardening,' I'd be like 'You're crazy!' " said Leong. "But here I am."

A couple of months later, her small pumpkin plants offer a modest rebuttal to the urban wasteland.

She visits every couple of days, sprinkling the baby gourds with graywater from doing her dishes. She hopes she might one day meet the garlic and tree nurturers. Together, she thinks they might find even more ways to green this small patch of L.A.

Tags:  can you weigh a baby on a regular scale