The recent launch of BMW’s new R 18 cruiser-based ‘full dress’ tourer, the Transcontinental, which, like many motorcycles of this type comes equipped with everything up to the kitchen sink and thus can be measured using the equivalent of household appliances as the value.

Big weight and heft are generally the foe of the average biker, making motorcycles more lethargic off the mark and wallow through the bends, but sometimes the chunk is just part of the beefy performance figures.

With 125cc or less motorcycles so light you can almost lift them up and carry them yourself, this rundown looks at the more portly, ‘big-boned’ motorcycles that is proud of its curves.

With Euro5 sounding the death knell for heavy elder statesmen as the Yamaha FJR1300 and Moto Guzzi 1400 California, we think the results make for interesting reading. So here, in ascending order, is the Top 10 heaviest production motorcycle currently on sale, according to their claimed kerb weights…

Hugely anticipated and all-new for 2021 Suzuki’s 1340cc hyperbike is many things: with 187bhp it’s phenomenally powerful and delivers a straightline rush like nothing else.

It’s also striking-looking and, now with a full suite of rider electronics and TFT dash impressively equipped as well.

However, at a whopping 264kg fuelled and with Kawasaki’s rival ZZR1400 and its even heavier touring version the 1400GTR (315kg) no more, it’s also the heaviest of the current breed of high tech sports tourers…

Yes, it may be only 900cc (due to its MT-09 underpinnings) but due to its extra wheel and radical, leaning suspension system (plus also the small fact that the FJR1300 - 292kg - is now no more), the funky, leaning three-wheeler Niken, especially in panniered and tall screened ‘GT’ form, is also currently Yamaha’s heaviest production bike, which is probably part of the reason why it hasn’t caught on.

Yes, there are other heavyweight three-wheelers or trikes around, most notably Harley’s Freewheeler and TriGlide (which is a whopping 564kg) but they don’t lean so aren’t really motorcycles so aren’t included here. Complaints on a post card to…

These new-fangled electric bikes are heavy, right? It’s all down to those big, hefty batteries they have to lug around. But which is the heaviest?

That honour goes, not to Harley’s headline-grabbing Livewire (which is 251kg) but to Italian brand Energica and its superbike-style Ego. The Ego may be blisteringly fast, certainly in terms of 0-60 acceleration and also a decent handler and well equipped with TFT, modes, Brembos and more. 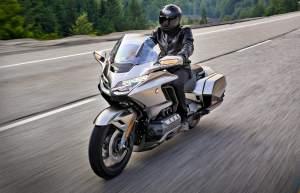 But it’s also back-breakingly heavy. The new, even pricier RS version, by the way, is slightly lighter – but not by much…

Adventure bikes can be heavy, too, right? A fully laden R1250GSA can be more than a handful, for example, Kawasaki’s four cylinder Versys 1000 is no lightweight either, especially in Grand Tourer trim (it’s 257kg) while Harley’s new Pan America is no flyweight either, chiming in at 258kg.

But the heaviest is the one most people have forgotten about. Based on Honda’s short-lived, V4, shaft-drive VFR1200F, which itself was universally criticised for being too heavy, the ‘adventure style’ (‘cos it’s not really meant to go off road) Crosstourer is heavier still, especially in novel, semi-automatic DCT form.

It’s not a bad bike, but the weight is a major reason why it’s never been as popular as hoped…

Triumph’s original Rocket III three-cylinder cruiser, as launched in 2004 with 2294cc and weighing a whopping 367kg was an absolute monster which is why the all-new version launched last year, weighing over 60kg less but still with 165bhp, impressive electronics and even more impressive handling, is almost miraculous – but it’s still a hefty bike.

A very hefty one. Triumph only publish dry weight figures, with the heavier GT version quoted at 291kg. Adding fluids usually adds around 14kgs so our figure is a bit of an estimate.

That said, it’s actually impressively light when you consider the unique performance, presence and experience it brings…

Yes of course the Gold Wing figures in this list. Honda’s big flat four then later flat six tourer has always been a heavyweight, especially in later GL1500 full-dresser form which proved so successful it dominated its class.

Instead the real surprise is how low the latest version comes down the rankings – and that’s all due to the massive weight reduction achieved with the current example when introduced in 2018.

Moves to a lightweight aluminium twin spar chassis, high tech suspension and electronics and more not only brought the big Wing bang up to date it cut a massive 48kg.

The latest version remains a phenomenal tourer with a space age specification, but the highest specced of all (and thus the heaviest) is the Gold Wing Tour DCT with full luggage pack and semi-automatic transmission. It’s not cheap, either, at over £30K…

In truth, the new R 18 Transcontinental is impressive in many ways: the R 18 cruiser on which its based already impressed for its monster air/oil cooled 1800cc boxer engine and slick heritage/cruiser style and finish./

Its sister bike, the R 18 B impresses for its added bagger screen and hard cases, 10.5in TFT dash, Marshall speakers and more and the Transcontinental is the ultimate in being a true US-style ‘full dresser’ with top box, high screen, fairing lowers, heel-toe change, the works.

All of that also, of course, adds to its weight, which is why its fourth in our list – significantly more than BMW’s own, six cylinder K1600GT,(which is 348kg).

It’s fair to say revived US brand Indian has done a decent job of competing with Harley-Davidson since, under new Polaris ownership, it came out with its first all-new bikes in 2014 but much of its definition of being ‘better’ has been down to being ‘bigger’.

Based around the massive ‘Thunderstroke’ 1811cc V-twin, Indian’s big twins include the Chief cruiser, Chieftain bagger and, biggest of the lot, the Roadmaster full-dresser. And, boy, is it big! There’s a lot to like – sumptuous comfort, loads of luggage space, bags of grunt and a slick, integrated, TFT dash-controlled ‘infotainment’ system.

But all of that also costs in terms of price (the most basic version starts at over £26K) and weight, with the top spec Limited weighing in at well over 400 kilos…

Yes, a ‘big old’ Harley full dresser is vying for heaviest bike of all – but it’s not the one you might expect.

So, while the latest version of the classic ElectraGlide, the now £27K, 1868cc, TFT-equipped UltraLimited weighs in at 416kg, that’s not the end of the story. You could also go with the latest Road Glide Limited, with bigger frame-mounted fairing, larger front wheel etc which is heavier still at 423kg.

While the heaviest of the lot is also the most expensive, the top spec, hand-made, luxuriously-equipped CVO Limited which has all the goodies HD can think of, special paint, back rests, more powerful engine etc which all adds up to 428kg and a price of £37,495. Gulp.

Just think, that’s almost as heavy (and £15K cheaper) than a Caterham 7 170 car (which also almost has the same power and top speed). Add a pillion and it’s actually heavier!

And finally… last but by no means least (depending on how you look at it) comes the heaviest, and probably most contentious of all. The Corvette V8 powered Boss Hoss is unquestionably the heaviest bike in production (and probably also the silliest and ugliest).

The contentious bit is ‘in production’. A typically American oddball first produced in 1993 complete with 355bhp, the Boss Hoss is not officially brought into the UK and would probably fall foul of a million regulations if it were.

But as we write it is still being produced in Tennessee (in both bike and trike form), it is possible to import one into the UK (although surely you’ve got better things to do with your money) and there are used examples on the road over here.

Our advice, though, is: just don’t

Tags:  how to weigh gold on kitchen scales