To be a Londoner is to be an expert in nostalgia.

A city that warps and changes like a lava lamp (please enjoy that reference from my naff youth) produces bubbles of nostalgia at every turn - even a simple shopping arcade is enough to tug at the heartstrings years later, when it’s gone.

Built in the 1960’s, the Arcade was Walthamstow's first shopping centre, with various independent shops. It gradually lost business after Selborne Walk was built in 1998, and when it was demolished, many shopkeepers were put out of business.

In aTripadvisorreview of Walthamstow market, nostalgically named “Not what it used to be”, one user says that "Long gone are… all the lovely little clothes, shoe and toy shops. The arcade was demolished years ago taking away the wool shop, Derek’s music shop and Lockies the luggage specialists.”

READ MORE:Why Walthamstow is the best place to live in London, according to those who live there

Trudie Tinsley was born right behind the Arcade in Cleveland Park Avenue, around the same time the Arcade was built. By the time she was eight years old, she was spending her summer holidays in the seventies roller skating through the Arcade with her friends.

“It was a fantastic place for skating,” says Trudie. “It was L shaped and there was a slope coming down from the top so you could pick up quite a nice bit of speed round the corner. We would roller skate amongst the shoppers, if they were annoyed I didn’t notice! There was a central seating area with benches and flower pots. We had a great time.”

Now 55 years old, Trudie explains that helicopter parenting was not yet the norm and that kids left home after breakfast in the summer holidays and came back when it started to get dark. The Arcade was a constant in her childhood.

“All the shops we could have ever wanted were there,” she says, “It was the days when most mums still got all the shopping daily - there was a newsagents, a butchers, a greengrocers, a bakers, a pet shop..”“I remember being sad when it closed,” she continues. “There were a lot of pigeons and they started to roost.”

When the arcade was knocked down, there was a flat, open space for several years - and while it looks quite beautiful in pictures, Trudie recalls that the benches ended up being used by “groups of drunks” and made it somewhere you “wouldn’t want to go”.

Trudie misses the arcade - but seems to have found something of a replacement., “I’ve got a little shop in Wood Street indoor market, Mrs Tinsley’s Vintage ” she says, “it’s not quite the same because it’s on a smaller scale and they’re just little tiny units, but I think it’s the nearest thing that’s left now, in Walthamstow.”

Jay Stansbury, 41, remembers the arcade as it was in the early 1990s when he worked before and after school at the shop on the bend in the arcade, Mister Cheapie.

“Mister Cheapie sold toiletries,” says Jay, “toothpaste, big packs of toilet rolls, that sort of thing. It was like walking into something from the 70s, it was all dark and brown, things piled up to the ceiling.”

Mister Cheapie had a stall in the market. Jay had to move stuff from the shop to the market stall, go to school, then after school he would move it all back to the shop.

"In the early 90s it was quite common for kids to have evening and weekend jobs down the market,” he explains. “You could go to most of the fruits and veg stalls and you’d see loads of kids running around carrying boxes, walking barrows up and down. That’s how we made out money as kids. By the time I was 15 I was working for three different people, doing six days a week.”

Do you want to stay up to date with the latest news, views, features and opinion from across the city?

MyLondon's brilliant newsletter The 12 is absolutely jam packed with all the latest to keep you keep you entertained, informed and uplifted. 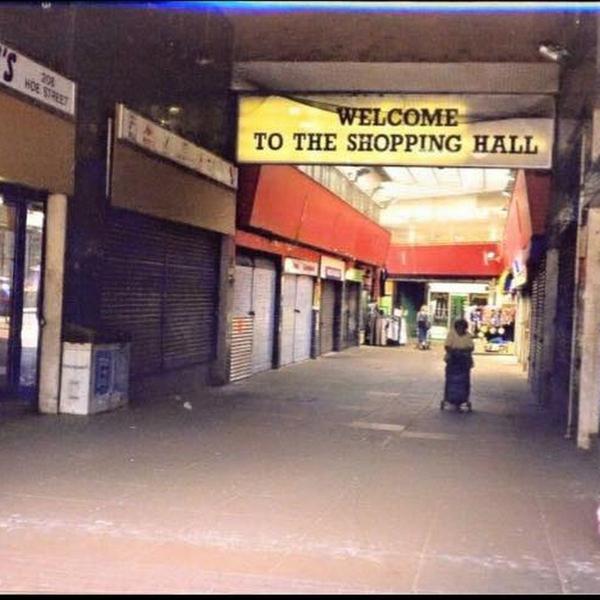 You'll get 12 stories straight to your inbox at around 12pm. It’s the perfect lunchtime read.

The MyLondon team tells London stories for Londoners. Our journalists cover all the news you need - from City Hall to your local streets, so you'll never miss a moment.

Don't skip a beat and sign up to The 12 newsletter here.

His main memory, he says, is the constant banter - shouts of, “Get a move on!” and “These kids don’t know what they’re doing!”

“You’re pushing a big cage and if you don’t stack it properly, bits and pieces fall off,” he says. “All the old guys who’ve been working down there for years go, ‘Oh, you can’t get the staff these days!’ You’d get bits of rotten fruit thrown at you by the boys on the fruit stall - it was pure banter. Some of my best memories of childhood were down Walthamstow market. It brought me out of my shell, and I became tougher in myself.”

Now, the Arcade is no more - there now stands your standard entertainment and restaurant venues: Nando’s, Five Guys, Turtle Bay, a cinema.

“I definitely think something has been lost,” says Jay, “Walthamstow was known for its market and the arcade. It was Europe’s longest street market. There was nothing put in its place, it was left derelict, the pigeons took over.”

And yet the impact it had on Jay was enormous, “It was my playground,” he says. “If I didn’t have the market I probably wouldn’t be who I am today.”

At age 32, Soraya got married herself, after her years at the bridal shop made her “want to find love and have the idyllic wedding”. She kept a tiara from the shop, and years later, finally got to wear it on her wedding day.

“They knocked the Arcade down, and my parents moved the shop to the high street,” says Soraya. “They carried on until I was 21 and it came to an end because of Waltham Forest rent and rates, it went up.”

Aside from her own family business, Soraya remembers that the Arcade was a little community in which everyone seemed to know each other, where she would go to a shop that sold secondhand retro clothes.

“At the time that was really only done in Camden,” she says. “The couple who ran it was so lovely, I’d go in and chat for a while and keep myself out of mischief. I feel sad I don’t know what happened to all those businesses.”

Now living in Kent, Soraya says she barely recognises much of Walthamstow when she comes back, and feels like something more than the businesses was lost when the Arcade was demolished.

To be a Londoner is to be an expert in nostalgia.

Even a simple shopping arcade is enough to tug at the heartstrings years later, when it’s gone.

Erica is a London Stories Writer, and is particularly interested in London history - the stranger the better. She lectures on features writing at various UK universities, has written for the Guardian, BBC and Medium, and is the author of the book This Party’s Dead.

Check out some of her favourite pieces here:

Tags:  what is the most accurate luggage scale