The Best Smart Scales for a Healthy Home

When you’re committed to a fitness program to shed unwanted pounds, use a scale that accurately measures and stores your measurements with every weigh-in. Thanks to technology, the ubiquitous bathroom scale is much smarter than it used to be. Today’s smart scales and body fat scales can measure more than just weight. Body fat, body mass index (BMI), muscle mass, body water percentage, heart rate, and metabolic age—these are among the many features available.

Smart scales help you assess and track your short- and long-term fitness goals. They also provide the big picture to help keep you motivated by monitoring weight fluctuations and fitness trends over time. Here are some of the best smart scales by category.

What to Consider When Choosing the Best Smart Scale

In addition to app compatibility and ease-of-use, here are some features to consider when buying the best smart scale for health and fitness tracking.

While smart scales are designed to provide precise readings, accuracy can still be affected. Movement is one of the biggest factors that influence accurate readings. Slight movements can interfere with the scale’s reading, so it’s important to remain as still as possible during every weigh-in.

And because the sensors send electrical currents throughout the user’s body to measure body fat, hydration also can impact a scale’s accuracy. After an intensely sweaty workout, a smart scale may record a lighter body weight. To avoid inaccurate measurements, try to maintain similar conditions for each weigh-in, including wearing the same kind of clothing, drinking the same amount of water, and weighing at the same time of day.

Some of the best smart scales come with rechargeable batteries that can last up to 18 months. On average, fresh AA or AAA batteries are expected to last around six to nine months. However, the more frequently the scale is used, the quicker the batteries will deplete.

Unless the scale includes a low battery warning, it’s difficult to predict when the batteries will die. Some users set a schedule to preemptively change the batteries to avoid any data loss or decreased scale function.

The ability to personalize a smart scale may be one of its most attractive features. The number of user profiles permitted varies from scale to scale. Some scales limit the number of users, while others have unlimited user capability. Most scales allow for guest weigh-ins to save the profiles for dedicated users.

Most smart scales come with an LCD readout, and some include an LED readout. The only difference between the two is that LED can be a little hard on the eyes first thing in the morning to those sensitive to bright light.

Smart scales work by sending small electrical currents through the body in a process called bioelectrical impedance analysis (BIA). These currents pass quickly through the water and muscle in the body and slow when they encounter body fat tissue and bone. The amount of resistance is measured and then used to calculate your body’s various compositions, including body fat percentage, lean body mass, and weight. 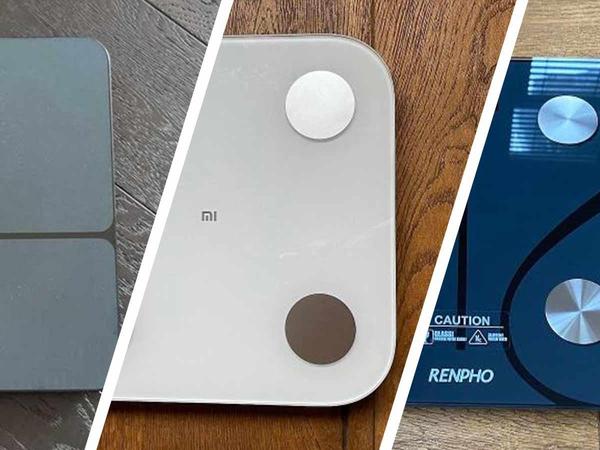 Smart scales come equipped with either WiFi or Bluetooth technology; some of the best offer both. WiFi may be more convenient. To sync with Bluetooth, a smartphone must be within a certain range, usually about 10 feet. Bluetooth can be faster and easier to sync than WiFi, because it facilitates data exchange between the scale and smart device. WiFi-enabled scales connect directly to the internet to send data.

After comparing devices, here are some of the top picks for the best smart scale, based on accuracy, function, ease-of-use, and price.

This scale’s sleek design catches the eye, but its looks are hardly its best feature. The scale has an anti-slip surface, ITO coating, and two sensors for accurate readings. Bluetooth enabled, the eufy can send data to your smartphone. The scale can track 14 measurements, including weight, body fat percentage, muscle mass, bone mass, and hydration.

This model comes with free access to its companion smartphone app. Those using a different fitness tracking app will find that it integrates seamlessly with the more popular versions. The scale can track up to 16 people and automatically recognizes each person’s measurements to identify the user’s profile. The scale has a large LED display, requires three AAA batteries, and can measure users weighing up to 397 pounds

This scale integrates with hundreds of health and fitness apps and comprehensively manages fitness data. In addition to the plethora of fitness metrics offered, the scale has modes for pregnant women, babies, and athletes. The athlete mode is ideal for fitness pros who have high muscle mass and low body fat. The scale automatically syncs with its Health Mate app to provide a full body composition analysis.

For the outdoor fitness enthusiast, this scale shares the day’s weather forecast when you step on the scale. It also syncs with the Withings activity tracker to give the previous day’s step report. It works with a personal digital assistant, allowing you to request data on your fitness progress. The scale supports eight profiles, and it runs for up to two years with four AAA batteries.

The RENPHO scale offers great value-for-features when it comes to tracking measurements. Capable of tracking 13 different BMI metrics, including weight, hydration, and bone mass, the scale provides an overview of body composition and tracks progress by day, week, month, and year.

It comes with its RENPHO branded-app but also syncs with some of the most popular fitness apps. The RENPHO uses Bluetooth 4.0, auto-calibrates, safely holds up to 396 pounds, and has four sensors for accuracy. The scale requires three AAA batteries that are expected to last up to 10 months. The scale is designed for one user profile.

Normal ranges are color-coded, which makes interpreting the numbers easier. With its Bluetooth wireless connection, TANITA’s Healthy Edge Mobile app analyzes and graphs the measurements to help monitor progress. The TANITA can measure users who weigh up to 440 pounds; it should run for one year on a fresh set of four AA batteries.

The ultra-thin circular design and LED display of the QardioBase 2 is quite possibly the most visually appealing bathroom scale on the market. It uses both WiFi and Bluetooth connections to transmit data, even when your phone isn’t handy. The Qardio app allows you to set and track goals with a full BMI report. It can weigh users up to 396 pounds, store eight users’ profiles, and allows for unlimited guest weigh-ins. Its pregnancy mode tracks data by trimester.

The Qardio scale stays powered for up to a year after USB charging, so no batteries are required. It also syncs with popular fitness apps and offers emoji feedback at weigh-ins. For optimal accuracy, the scale requires weekly calibration.

Tracking weight and other health data is beneficial no matter what your fitness level. Smart scales and fitness apps personalize your fitness journey, keeping you motivated with accurate, up-to-date body composition analyses and measurements. With so many devices available, you may still have questions about smart scales. Below are some of the most frequently asked questions along with their answers.

A smart scale is a digital weighing device that uses bioelectric impedance analysis (BIA) to send and receive electrical currents through the lower body to analyze fat and muscle composition. The scale may use either Bluetooth or WiFi to sync measurements with various health and fitness apps.

Smart scales are safe for almost every user. However, they’re discouraged for people with pacemakers because the electric signal could interfere with the device. Pregnant women also should use a smart scale with caution, using it only in weight mode. Alternatively, choose a scale with a pregnancy feature.

Generally, experts recommend weighing first thing in the morning after emptying your bladder, wearing the least amount of clothing as possible. However, consistency is more important than the time of day, which means weighing yourself at the same time each day under the same circumstances. For example, you may want to weigh before a meal or after a workout.

To reset, or calibrate, your smart scale, follow the manufacturer’s instructions. But it’s usually as simple as stepping on the scale and stepping off when zeros appear. After the scale shuts off, open the app.