(Pocket-lint) - Skoda's first all-electric, the Enyaq, has been to the barbers and got a fancy chop: that's how the Enyaq iV Coupe fits into the range, with its downward sloping roofline and upward sloping price tag (compared to the standard model anyway).

Pricing is something you'll want to keep a close eye on, though, as that's a big part of the Skoda's appeal compared to other EV options within the Volkswagen Group's stable. The VW ID.4, for example, is built upon the same underlying platform, arriving in and around a similar predicted asking price.

In addition to fair pricing, another thing Skoda is particularly good at is offering comprehensive specification: the Enyaq iV Coupe really doesn't scrimp on its feature set, with a large infotainment screen included as part of its standard system, a suite of safety assists, decent real-world range, and effective charging speeds (now at 135kW).

So does this high-ride SUV with the lower-cut roofline bring enough additional visual appeal over the original Enyaq to make it a big hit in the EV world?

Pictured is the Enyaq iV Coupe vRS, the first ever Skoda EV to obtain the vRS badge, but we're not especially going to focus on that model in this review. Yes, it's a little bit faster than the standard Coupe iV (the vRS runs 0-62m/0-100km in 6.5s, the standard at 8.8s), can go a little quicker too (112mph/180kmph vs 100mph/160kmph), and is all-wheel drive rather than rear-wheels only, but other than bigger alloys and the rather outlandish Crystal Face illuminating front 'grille' as standard, that's the key spec difference.

We don't feel the vRS badge quite asserts the pomp that you'd usually associate with it here. There are stacks of alternatives that are quicker off the mark at around the same price point, the Volvo XC40 Recharge being one of many examples that isn't a Tesla. But it's important to point out the vRS exclusively goes on sale first, so you'll have to wait a little longer for the more cost efficient model to come to market.

That vRS blip out of the way, however, and there's plenty of positive to say about the Enyaq iV Coupe. It's got distinctively Skoda looks, with angular frontage to standout from the crowd, but being a coupe it's altogether less up on its hind legs than the standard model - which makes for a much better-looking profile.

Distinctive looks are becoming more and more important in this freshly established world of EVs, too, with the likes of the Hyundai Ioniq 5 and (we think even better-looking) Kia EV6 each cutting their own path in the aesthetics department. The Enyaq can hold up against that pair, we feel, providing yet another alternative.

From exterior to interior and there's one rather genius feature about this Skoda: the Coupe model loses no interior headroom compared to the standard Enyaq whatsoever. That's because all Coupe models come with a glass ceiling that extends right into the back in a swooping motion beyond the sunroof - which is another part of the reason for increased cost, no doubt - further adding to the high-end aspect of this design.

There's no sunshade to pull across the ensure those rear passengers get said headroom, but the glass is tinted like sunglasses to negate direct sun flare. Ample knee room means the rear of this Coupe is more accommodating than most.

Up front is even more of a treat, with plenty of space for both driver and passenger, with comfortable seats - and stacks of interior options for finish available - and ample space to store your kit in the various cubby holes, centre bin and dual cup-holders. 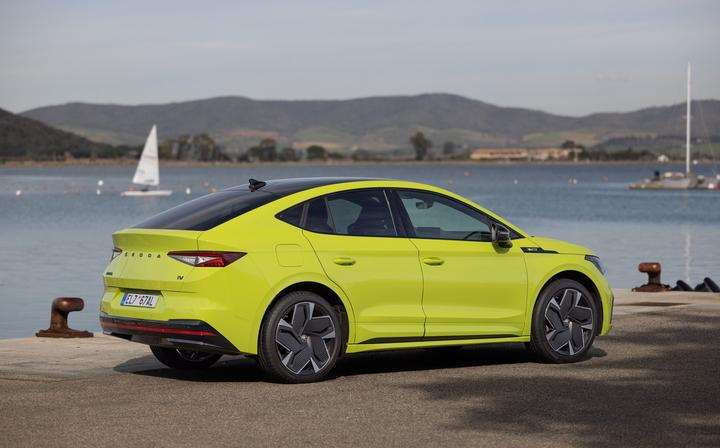 If you're not transporting people but luggage instead then the 570 litre boot is only 15 litres down on the standard Enyaq - that capacity lost due to the lower roofline, but not by a significant margin. It's one of those rare coupes that avoids considerable compromise.

Comfort assured, it's less the sensation of the seats that'll be front and centre of mind, more the 13-inch touch display that sits proudly off the centre of the dash. That's a big screen to get as standard (there's no larger option, not that one's needed), which is great for seeing navigation and infotainment - whether you're running with Skoda's default offering or linking up Android Auto or Apple CarPlay to take care of things - in addition to the head-up display (HUD) delivering up-to-the-minute speed limits and quick-glance navigation (including with AR animations if you select the option - but we'd say avoid that distraction).

When we reviewed the original Enyaq we thought that the degree of touchscreen controls was a little heavy, but Skoda has listened and made some updates, such as making it quicker and easier to access the lane assist control as one example. That's all part of the ME3 software update, which also introduces over-the-air (OTA) future updates, so as Skoda improves the system you'll get the latest without needing to go into an actual Skoda dealership to get an update.

In addition to the touchscreen forward approach for controls, the Enyaq iV Coupe also includes a row of sensibly positioned physical shortcut keys on the dash, plus rotational shortcut dials on the steering wheel, which is all for the better compared to some of its competition - much more so than VW's ID range in our view.

In addition to that big centre display, there's also a second screen that's part of the driver's Virtual Cockpit. This is far smaller-scale, but therefore not too distracting, and shows-off all the relevant at-a-glance information you'll want to see.

Additional safety and convenience are part of the Coupe package, too, with Skoda's Travel Assist 2.5 pack bringing auto-braking, narrow lane assist, assisted lane change, urban evasive steering support, and park assist to the fore. You can add additional features - such as lane-keep, adaptive cruise control, blind spot detection, rear parking sensors - but you'll have to pay extra for these.

In the UK there's only the Enyaq iV Coupe 80 and vRS models to concern yourself over, both featuring the larger capacity 77kWh battery. In Europe there's also an iV Coupe 60 option (58kWh battery), plus an 80x (77kWh battery, but with all-wheel drive). We've only driven the former two, as will be available in the UK, so can only comment on those here.

So onto the big one: electric range and recharging. Compared to the standard Enyaq the iV Coupe gets some upgrades in these departments. But temper your expectations, because with a 10-15km extra per charge quoted, that means about 8 miles additional on the clock. Charging, at up to 135kW, is an additional 10kW compared to the initial Enyaq launches and is now Skoda's standard .

We found the Enyaq iV Coupe to be well equipped with potential range and how that translates to real-world driving. That 77kWh battery capacity and 150kW motor is said to deliver around 340 miles (545km) per charge. As ever, however, those WLTP derived figures are out of reach, just as they are in all electric cars.

So what were we getting? As you can see from one of our in-car pictures, a 75 per cent charge quotes 284km distance remaining. Thus around 95km/60 miles per 'quarter tank'. All in all, 380km/240 miles would be realistic with motorway driving conditions at speed in the vRS. In the iV 80 Coupe we were seeing a higher average, owed to the lower power motor.

Overall that's similar to the competition: as we said of the VW ID.4 (which uses the same battery capacity on the very same platform), head to city streets at lower speeds only, and that rate will go up to something between the 240-300 miles bracket.

Behind the wheel, irrelevant of drive mode selected (there's marginal differences between whether you're in eco or sport), everything feels rather serene and quiet. The Enyaq presses on, not quite as spritely as some EVs we've driven, but in a refined manner. It's a real smooth operator in all kinds of driving conditions - unless you're on lumpy and bumpy roads, where the sheer mass of this SUV can be felt and it lunges about a bit too heavily.

You're not going to buy an Enyaq iV Coupe for thrills and spills, really, as that's not the point of this SUV. But with instant torque from that rear-wheel drive electric motor there's immediacy to pulling away, while overtakes won't be a problem with 0-60mph speeds of around 8 seconds.

Skoda's first EV has got a trendy new haircut: that's the long and short of what the Enyaq iV Coupe is all about. It brings sportier looks thanks to that sloping roofline, more glass to its ceiling, a vRS option (that isn't worth buying in our view), improved infotainment software, and therefore a slightly higher asking price as a result.

That climbing price point might put it more squarely at odds with Volkswagen's ID.4 and similar competition, so it's going to depend on how much budget is the key driving factor in your purchase of an all-electric SUV. You do get a lot for your cash, though, with decent range and charging, an impressive amount of rear passenger space, and decent infotainment all standard.

Tags:  where to buy luggage scale near me