The recent rally across equities over the past week appears to have run its course for now as investors nervously track developments in the Ukraine war, with efforts to reach a diplomatic solution crawling along, AFP said.

All eyes are on meetings this week of NATO, where Joe Biden and other leaders are expected to discuss further punishing Moscow for the month-long invasion, while the European Union is still debating a possible embargo on Russian oil.

A warning from Russia that repairs at a terminal near a Black Sea port may take up to two months, causing a drop in exports of about one million barrels per day, added to supply worries.

Both main contracts rallied more than five percent Wednesday -- with Brent back above $120 -- and they continued to advance in early Asian business.

There was little support from speculation about progress in the Iran nuclear deal, which could lead to the release of Tehran's crude back onto world markets.

The surge in oil markets will further fan already elevated inflation -- it is at a 40-year high in the United States and a 30-year high in Britain -- putting pressure on central banks to tighten monetary policy before prices run out of control.

In light of that, the Federal Reserve has turned increasingly hawkish.

After last week announcing a quarte- point lift, bank boss Jerome Powell on Monday suggested officials could lift interest rates as much as half a point on more than one occasion if price gains do not slow, even at the expense of the economic recovery.

The prospect of tighter financial constraints down the line is weighing on stocks. 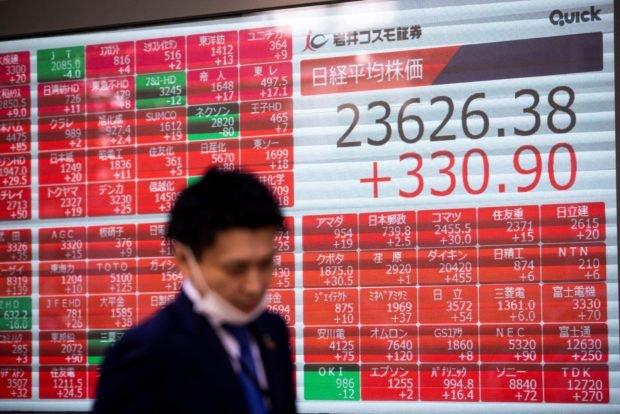 "We may see volatility increase further regarding multiple 50 basis point hikes and even emergency rate hikes in the near term. Pressure points are building again with oil back on the boil, resulting in stagflation weighing on sentiment again."

In early trade, Tokyo, Hong Kong, Shanghai, Seoul, Wellington, Taipei and Bangkok were all down, though Sydney and Singapore eked out gains.

"The Fed needs to build up its ammunition," she told Bloomberg Television. "Overall, global growth is going to be dampened and they need to be able to cut rates later on, should this have a greater-than-expected recessionary effect."