The work of Zurich-based architect and post-doctoral researcher Mariana Popescu revolves around innovations in fabrication processes and use of materials. In the last few years, she has been developing KnitCrete, a formwork system for complex geometries in construction that combines the use of three-dimensional knit textile with concrete. The system, which has been tested at different scales, was notably demonstrated in 2018 with the KnitCandela structure, a thin and sinuous concrete shell built on an ultra-lightweight knitted formwork as an homage to the spectacular geometries developed by Spanish-Mexican architect Félix Candela. The formwork for the structure, which was built and presented in Mexico City, amounted to 25 kilos that were easily transported in Popescu’s luggage as she travelled from Switzerland to Mexico. The formwork elements were then tensioned in place and the concrete was then cast. The result was striking, lightweight, and unexpected, combining the contrasting materialities of a textile interior with the rough concrete exterior.

Born in a family of engineers, Popescu grew up surrounded by role models that dealt with technical disciplines, and her studies at the TU Delft and ETH Zurich continued in this territory. “Between my studies and doing the PhD at ETH, I worked, and could see how things happen in reality, how we construct things and where some of the inefficiencies are,” Popescu remarks. “It became a fascinating topic to me”. Following her doctoral studies, Popescu stayed at ETH where she continues to be a researcher at the Block Research Group (BRG), collaborating with the Chair for Physical Chemistry of Building Materials, as part of the Swiss National Centre of Competence in Research (NCCR) in Digital Fabrication. In this context, she investigates more efficient, less wasteful ways to build.

While her research started by focusing on composites and framework, she quickly turned to searching for other kinds of manufacturing techniques, and came across the potential of three-dimensional industrial knitting for complex geometries. While these kinds of knitting are usually used in smaller size, such as in the knitted shapes of sports footwear, Popescu ambitiously broke with conventions of scale, and started developing knitted formworks for concrete structures. This allowed her to create a significantly lighter kind of formwork, particularly in the case of complex and bespoke geometries, which could open up a path to significantly reduce the amount of formwork waste in the construction industry. 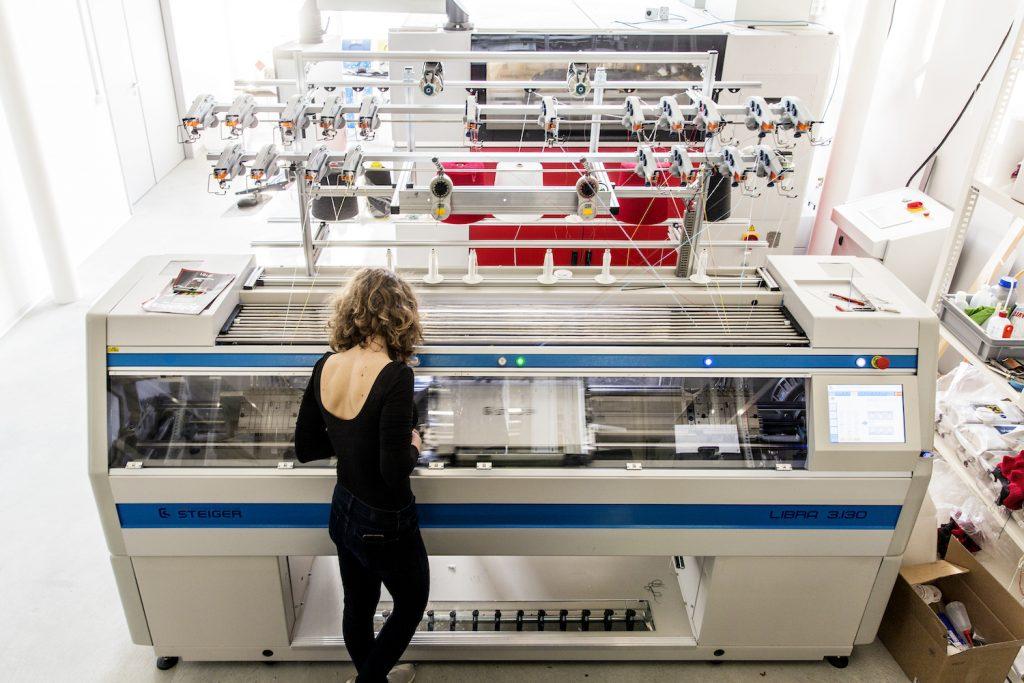 In Popescu’s and the BRG’s KnitCrete – stay-in-place knitted formworks for complex concrete structures – the formwork system is based on a prefabricated textile, knit and woven with glass and carbon fibre that can be tensioned on site to support the casting of concrete. This could point a way to formwork that is light and flexible, can be transported easily – as in the case of the KnitCandela – and quickly assembled, tensioned and prepared. Such a technology points to a systemic change in the realm of construction, not just the speed and waste-reduction of material, but in the accessibility that it would offer globally. Using knitted formworks in a construction site “would make it more accessible,” Popescu notes, “because you don’t have to lift 25-kilo bags of cement, which have been designed for the average 80-kilo man that is 170 cm tall.” Less weight can also mean less injuries and a healthier construction site, as well as a more efficient design and construction process.

While knitting has been traditionally described and enacted as a gendered activity – and in the realms of architecture and design this association goes as far back as the Bauhaus – Popescu notes how it is just another technology. “It could have just as well been a robot, a CNC machine, or even a 3D printer – [the industrial knitting machine] is pretty much a 3D printer.” And as for the other components of the research, she points out how it is merely computation and programming, things that are endemic to engineering and digital fabrication. In fact, there are not that many differences between coding for a computer and coding for a knitting machine.

In the potential of knitted formworks for concrete structures, however, there is still much to explore. Following the initial, smaller-scale experiments, Popescu and the BRG team are currently developing a permanent structure, a pedestrian bridge to be inaugurated in 2023 in Rotterdam, the Netherlands. Simultaneously, they are testing the use of textile as a reinforcement layer within the concrete itself; and finally, exploring the use of UAVs (unmanned aerial vehicles) in material placement, applying concrete in complex geometrical structures. Ultimately, Popescu sees great potential in democratizing this kind of technology. “If you want to change something,” she says, “you need to get the knowledge out there.”

Tags:  how do luggage scales work