The MultiPro Express Weigh+ is one of Kenwood’s most versatile food processors and comes with a plethora of attachments to make food prep a breeze. From chopping and dicing vegetables to blending smoothies and whisking eggs, there isn’t much it can’t do.

While most half-decent multipurpose food processors allow you to do much of the above, the Express Weigh+ has a few extra tricks up its sleeve that set it apart from not only cheaper models but also similarly priced competitors.

These include built-in scales for easy weighing of ingredients, a heat-proof jug for blending hot soups and sauces and an “Express Serve” lid, which feeds chopped ingredients directly into your bowl for instant salads. For anyone who enjoys cooking but finds prep boring, the Express Weigh+ offers an easy to use solution.

The Express Weigh+ is certainly well equipped. As well as the items mentioned above, it has a powerful 1,000W motor and comes with a mind-boggling selection of attachments. These include five grating disks, a three-litre food processor, mini whisk, citrus press, dough hook, Express Dice pusher spatula, weighing tray and a blade storage bag.

The overall build quality is a big step up compared with many of Kenwood’s cheaper processors, too, and has a more solid, professional feel to it. It’s made of a mix of thick plastic and brushed metal, with a digital screen for the scales and a variable speed dial on the front. Despite the army of attachments, it’s still relatively compact, measuring 265 x 200 x 410mm (WDH) with the blending jug attached.

An upgraded design and all those accessories will set you back £200, which isn’t cheap, so if you’d rather spend less and are happy to lose most of the bells and whistles, the 1.2l, 800W Kenwood MultiPro Compact is a reasonable alternative with five attachments, and will only set you back £80.

Alternatively, if you’d like something with more automated blending and chopping functions, the similarly priced Ninja 3-in-1 with Auto-IQ (£200) is our current favourite. It comes with a slightly more powerful 1,200W motor and a glass blending jug that can be used with slightly cooled soup, although the official advice is to avoid hot liquids.

I had high expectations for the main food processor unit, given its large blade and motor size, and these were certainly met. It had no problem dicing through tough ingredients such as raw squash and potato, and the three-litre capacity made prepping vegetables for four people quick and simple. What’s more, the single, variable speed dial makes using the processor as easy as can be, and the built-in weighing scale, which can be used with every attachment, is a huge time-saver. 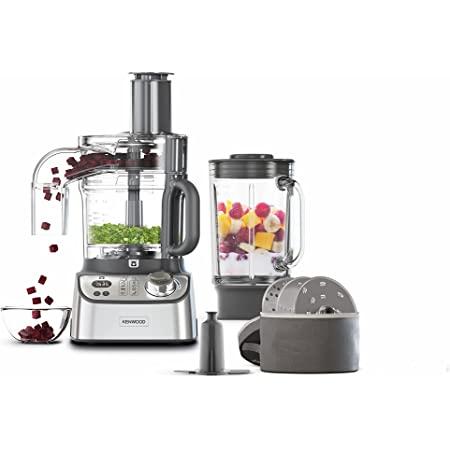 There’s a 2mm, 4mm and extra-fine grating disc, all of which delivered evenly sliced results in testing. The 2mm and 4mm discs are ideal for creating finely grated salads or prepping vegetables for frying, while the extra-fine disc turns ingredients into a pulp-like substance that can be used in anything from sauces to baby food. The 2mm and 4mm are reversible, so you can create wider or shorter strips depending on which side you use.

Another handy attachment is the thermoresistant cold and heatproof jug. Not only does this allow you to safely blend hot liquids straight from the pan – something many blenders and processors can’t do – but it’s also fast. In testing, it blended hot soup to silky-smooth perfection in just 20 seconds and blitzed through half a tray of ice in the blink of an eye.

Alas, one of the more exciting attachments on paper turned out to be a tad underwhelming: the Express Dice tool. This is a two-part tool that sits inside the main feeder tube of the food processor’s lid with a sharp, blade-like grid on the bottom and a plastic pusher that fits inside it. Put your veg inside it, shove it through the grid with the pusher onto the slicing disc and hey presto: you have finely diced vegetables in seconds.

That’s the theory, at least. In practice, I found it incredibly difficult to push ingredients through the grid and, despite my best efforts, I failed to get half a small, peeled potato all the way through. Even when I recruited the help of someone stronger, it was still extremely tough to do and it seemed to put a worrying amount of strain on the processor itself.

It’s worth noting that the instruction manual states that you can get around this issue by quickly parboiling ingredients first, but this takes more time and makes more mess, cancelling out any time saved by using a food processor in the first place.

Other accessories, including the whisk and dough tool, worked fine when working in small batches but weren’t all that powerful. Light dough put quite a bit of strain on the machine, and egg whites took several minutes to whisk into stiff peaks.

There’s also a distinct lack of automated features on this processor. While some may like the simplicity of a single, manual dial, there are other food processors in the same price range – including the aforementioned Ninja 3-in-1 – that offer both manual and automated preparation options.

READ NEXT: Our favourite food processors to chop, blitz and puree with ease

Overall, the Kenwood Express Weigh+ is a solid food processor. It’s easy to use, with a single, variable speed dial that’s ideal for cooks who like to keep things simple. The food processor and grating blades are fast and effective, and the heatproof blending jug is a nice addition. Its built-in scales are very useful, too.

I’ve no doubt that this would make a good addition to some people’s kitchens, and the integrated weighing in particular means this processor is still fairly good value. However, the dice, whisk and dough tools aren’t brilliant and, for my money, the lack of automated programmes undermines its appeal somewhat.

If you’re looking for a bit more bang for your buck, the Ninja 3-in-1 food processor is where you should look. You won’t find any weighing scales and it comes with fewer, albeit arguably more useful, attachments, but it’s a tad more powerful than the Kenwood. These include a super-sized 2.1-litre blending jug, a smaller personal 700ml blending cup, a reversible grating disc and additional four- and six-point blades to make prepping and blending even faster. There are also several intuitive, automatic and manual settings that take away most of the guesswork and, in my opinion, makes this a more enjoyable blender to use.

Tags:  how to weigh baby on kitchen scale