Fitbit has become synonymous with fitness tech for the everyday person with accessible and easy-to-use gadgets that track progress and encourage movement. The Aria Air is Fitbit’s answer to the digital body weight scale, designed to sync with the Fitbit app and provide data to the collection of information gathered via your Fitbit smart watch.

The Aria Air is an attractive Bluetooth scale that measures body weight and calculates BMI. Although you can use the Aria Air without owning one of their fitness tracking watches, the scale is meant as a companion device to one of thebest Fitbits. That said, the Aria Air lacks metrics such as body fat, muscle mass, bone, and water weight. Is it still one of thebest smart scaleson the market? Read our full Fitbit Aria Air review here.

The Aria Air retails for $49.95 and can be found on the Fitbit website, Amazon, Best Buy, and at other stores.

One of the most prominent features of the Aria Air is its attractive design. It is minimal, clean, and fits into any bathroom. It comes in white or black and is sleek with rounded corners and a display screen. Measuring 11.8” wide and 11.8” long with a thickness of 1”, there’s plenty of space for people of any foot size to stand on the scale, while it’s still slim enough to slide under your counter, dresser, or bed.

The scale is made from tempered glass and encased in ABS plastic, a material known for its ability to withstand impact, sturdiness, and rigidity (for reference, it’s what Lego blocks are made of).

The display is a backlit LED screen that reports body weight in pounds, kilograms, or stones and the high contrast backlighting means the display is easy to read, even without the bathroom lights turned on. I found the scale to be accurate, although it rounds to the nearest 0.2lb, which is common with digital scales. When stepping on it, my weight was displayed immediately and synced to my Fitbit account quickly. 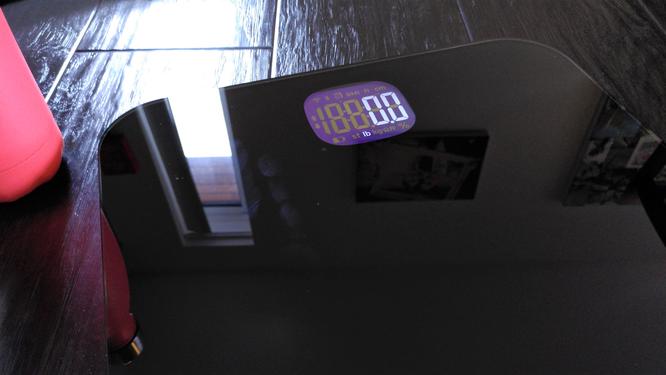 The Aria Air does not use bioelectrical impedance, so it does not measure body composition metrics such as body fat or muscle mass. This is advantageous for anyone with implanted devices such as pacemakers or those who are pregnant, although you should consult your health care provider to be sure.

Set up of the Aria Air was straightforward, even for the non-tech inclined. The first step is to download the Fitbit app if you don't already have it. The app is free to download in the Apple App Store or the Google Play Store. If you don't already have a Fitbit account, you'll be prompted to enter your personal information, such as birthdate, weight, height, and sex.

Next, flip your scale over to find the battery compartment and pull on the plastic tab to turn your scale on. You’ll then need to use the Fitbit app to set up your Aria Air — just tap the today tab, then your profile picture to set up the device. The directions will be prompted to you on your screen to connect to the scale.

At this point, you can choose your preferred unit of measurement by tapping the button on the back of the scale to switch between kilograms, stones, or pounds.

Weighing yourself is just as simple. Place your scale on a flat hard surface; avoiding carpet, as this can interfere with the proper measurement. You'll need to open the Fitbit app and tap the ‘Today’ tab before stepping onto the scale. Your weight will automatically sync via Bluetooth after you step off the scale. Tap ‘Save’ and your weight will be logged into your Fitbit profile. Your profile will save your previously logged weights which you can view in a graph format to see progress.

If there are other people in the household hoping to use the Aria Air, each user will need their own Fitbit account. You can send an invite from your Fitbit app, using the person’s Fitbit profile, or email address. My partner found this process quick and easy to complete.

You'll need 3 AAA batteries to power your scale, and these are included with your purchase.

The Fitbit app used for the Aria Air is the same one you would use for any Fitbit device. This makes the scale attractive to people already fans of Fitbit’s tech (like myself). It's a one-stop-shop to track your steps, exercise information, and even a place where you can log your food intake and see your calories in versus calories out.

The addition of a scale shows you how these habits affect your weight, providing a clearer picture of your overall success toward your goal. I found this feature very useful as it brought together all of the abstract data into a coherent complete picture. I could see how a week of less sleep interfered with my activity levels, made snacking more difficult to resist, and resulted in a bit of weight gain. Luckily, Fitbit’s app has a program to help get you back on track toward your goals with prompts, plans, and personal reports.

The app allows you to set goals for your weight, calories in versus calories out, sleep, and exercise. Having all this information in one place makes examining what works and what doesn't easier. For instance, if you use one of their fitness trackers that also tracks your sleep, you can see how your activity and sleep patterns may influence your weight that week, month, and so on.

There's also a community of Fitbit users for motivation, as well as plans and programs you can join to keep you engaged and working toward your goal. Each week you can get an email in your inbox showing you your progress which details all of your metrics and the changes from the past week, including weight change.

Note that you can still input your weight manually into the Fitbit app, without the Aria Air scale.

The Aria Air is meant to be used with the Fitbit app, but through Fitbit, you can link and connect to a broader range of other apps. These include MyFitnessPal, Google Fit, and Lose It! Dozens of additional apps are compatible with Fitbit’s range of products.

For anyone who enjoys Fitbit’s easy-to-use integration in a single app, the Aria Air is a solid choice. The Fitbit programming, community, and statistical data logs are excellent tools that can provide motivation and support to keep you working toward your goals.

If you have a large household that includes children and aren’t concerned with your body composition measurements, the Aria Air is an excellent choice. Its rugged construction, sleek design, and ease of use make it worth buying if you already own Fitbit devices. Without additional Fitbit products, the scale is not a particularly stand-out choice.

Tags:  how accurate is fitbit scale for body fat