Need to check those vitals? The Withings BPM Core aims to bring three checks to one cuff, even if it comes with the odd flaw.

There are wearables of all kinds in the world, but most are for your ears and your wrist. Earphones aplenty and smartwatches galore, these are what make up most of the wearables you can find, but there are others, too, and they may focus on your forearm to get to know you better.

Withings’ BPM range of wearables has this part of your body firmly in mind, squeezing your arm tightly to check your blood pressure, and maybe something else.

In the BPM Core, that “something else” includes your heart being measured in two ways, with a graph of your heart’s electrical activity and the sound it makes as well.

Are these additions enough to make the BPM Core a must-have check-up for concerned folks at home? Or does it still need some work overall?

With the initialism “BPM”, you’d be excused for thinking Withings’ latest is all about electronic music, because “BPM” can translate to “beats per minute”, but there’s more than one way to explain an initialism.

In the BPM Core, Withings is referring to blood pressure monitors, something it has been dabbling in as part of its focus on health technology.

It has scales and a thermometer and watches and even a sleep tracker, and then it also has blood pressure monitors that talk to your phone, recording your blood pressure readings and providing a chart for yourself or your health professional, something you can find in its first model, the BPM Connect.

In this year’s BPM Core, the approach is a little different.

Much like the BPM Connect, you’ll get blood pressure readings, but Withings has also added a couple of other important features in the Core, drawing on the ECG tracking found in the ScanWatch, while also listening out for your heart with a digital stethoscope.

Not every wearable we review is a pair of earphones or smartwatch. Some wearables cover your health in a different way, and that’s precisely what the Withings BPM Core is all about, covering health differently.

Rather than wear it full time, you’ll slip it on for about a minute when you need to check your vitals, which could be in mornings, at night, or really whenever you feel you should. If you have blood pressure problems or are on medication for it, you might be looking to track a condition or get yourself checked out.

While getting yourself to the doctor is clearly the best approach, if you’re keen to see if a bit of tech can give you a gauge of what’s going on, that’s largely what the BPM Core is designed to do, stepping in, checking your vitals, and providing some semblance of just what is going on in your life.

Grab the BPM Core, wrap it around your arm, and press the button on the top, firing up the blood pressure cuff. Like all cuffs, it’ll squeeze your arm and check your blood pressure, and reporting it to your phone as well as the limited LED screen on the side of the unit.

Once your blood pressure has been checked, you’ll want to hug the BPM Core unit to your body and press its little flat white surface to the side of your chest, all the while holding the metal part of the cylinder on the side.

Holding it down will let the electrocardiograph kick into action, running an ECG while also spinning up a digital stethoscope to listen to your heart. Both of these are checks for your heart, be it via the electrical activity in the ECG or listening to your heart beat through through your chest, and having the app do some basic checks to see if you’re in good health. 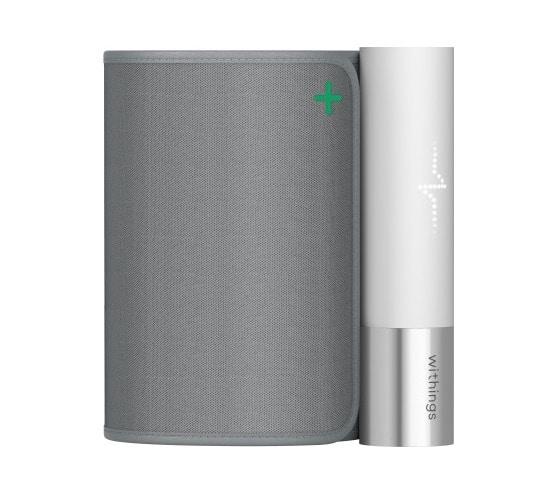 Granted, it’s not a totally legit medical analysis, as Withings doesn’t offer any medical advice from the technology, but it can give you a gauge of the sort of health you’re in.

Blood pressure tracking can tell you whether everything is too low or high, and whether you’re at risk, and you might then use this as a reason to see your doctor, especially if you’re concerned about the results.

But while we love the idea, one of the features just fails to work. Even though the BPM Core is all about checking your blood pressure, ECG, and listening to your heart via a digital stethoscope, the latter of these never works even when it does.

For the record, almost every time we used the Withings BPM Core, we were able to trigger the digital stethoscope and listen to our heart. But the app refused to recognise what it had heard and just relayed that we had “inconclusive results”. Every single time.

It’s a bit of a broken record, because you’ll find inconclusive results every single time you get the BPM Core to listen to your heart. Every. Single. Time.

Withings notes that you need to be in a quiet room to get the digital stethoscope working, but it doesn’t seem to matter how quiet the room is, as this feature never works.

In the quietest room in the house with absolutely nothing going on, we were able to play back the sound of our heart through the app, and yet even that was regarded as being unable to get a read out. Again and again, the Withings HealthMate app just said “inconclusive results”.

It’s enough to make you think that the device is doing its job, but the app is not. We could capture the sound of our heart repeatedly, but the app refused to classify what it captured. It means that no matter how or where you use the BPM Core, you’re probably not going to get to understand how your heart sounds, even if the device seems to suggest otherwise.

Priced at $449 in Australia, the Withings BPM Core sounds expensive, but it also may not overly be, even if one of its features does appear to be largely useless.

As it is in Australia, blood pressure monitors can be relatively inexpensive. But blood pressure monitors with an ECG? Markedly less so. Omron’s may well be the closest, and it’s priced at $722 and hardly bundled into a package as portable as the BPM Core. That makes the $399 price of the Withings BPM Core a downright value even if one of the features doesn’t work properly.

Mind you, there’s always the flaw in the price, because you might not need the ECG at all.

If you don’t need the electrocardiograph — maybe you have one in your Apple Watch, Galaxy Watch, or ScanWatch, or you just don’t need the technology at all — then the Withings BPM Core is rather pricey.

With blood pressure monitors typically ranging from $60 to $200, and the previous Withings BPM Connect found for $179, you’re paying for those extra features, and you may not need them. If you want them, the price is justified, but if not, the BPM Core is a little over where you probably want to be.

While we love the idea of the BPM Core, the feature set isn’t quite as strong as the idea, with at least one major aspect falling over very, very easily. The digital stethoscope is a cool concept, but it plainly doesn’t work, at least not in any usable way.

Essentially, this is a checkup missing a feature, and one Withings advertises as working on the box.

Throughout our BPM Core review, we could never find anything beyond “inconclusive results”, even if listening to our heart was a neat concept as it is.

Despite this catch, the Withings BPM Core makes a good case for people who want to keep track of their health with two important features: blood pressure tracking and monitoring over an ECG. The former is the most important, but the latter can be very useful, too.

If you don’t have an ECG on your watch and only want it when you’re checking your health at times, we can definitely see the BPM Core being truly useful and worth the price. But we’d probably think a little more if you really want to spend over $400 on a blood pressure monitor, especially if one feature just doesn’t work. Worth checking out, but it definitely needs a fix or two to be better.