The Food Standards Agency (FSA) has issued a warning to ensure you cook frozen chicken products properly to minimise the risk of falling ill.

New research by the FSA has revealed that a lack of awareness about how important it is to thoroughly cook frozen chicken products may mean people are risking their health.

There have been 511 salmonella cases caused by two strains in the UK in the past 16 months – all linked to consumption of frozen breaded chicken products such as nuggets and goujons.

In February, several chicken products sold in stores including B&M, Morrisons and Sainsbury’s were recalled due to fears of salmonella contamination, and many people aren’t aware that these products contain raw chicken.

The FSA is urging people to follow cooking instructions and handle products carefully – including treating frozen coated chicken as you would raw chicken.

Just under half of all adults (46%) who cook coated frozen chicken products such as nuggets, goujons, dippers, poppers and kievs admitted that they don’t always check cooking instructions when preparing them.

What’s more, only 58% of those polled said they always wash their hands after handling these products. 62% said the uncooked chicken products at least sometimes came into contact with other surfaces such as worktops and plates. 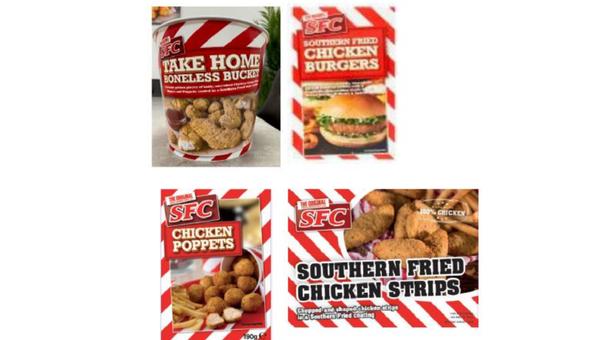 When cooking the chicken with other products such as chips or vegetables, 27% would cook at a lower temperature than stated on the pack.

According to the FSA, this all increases the risk of food poisoning.

The FSA says: ‘It’s important to understand that frozen chicken products often contain raw chicken, even though they may look pre-cooked on the outside.

‘While additional measures have been put in place by food businesses to improve the safety of these products, consumers also need to handle these products as they should other raw meat products.

‘Cooking food at the right temperature and for the right amount of time will kill any Salmonella bacteria that may be present. Therefore we are urging consumers to follow cooking instructions for these products to protect themselves and their families.’

Shefalee Loth, Which? nutritionist, adds: ‘As well as salmonella, cross-contamination from raw chicken is also a main cause of campylobacter bacteria food poisoning.

‘You can’t see these bacteria on food, so it’s really important to cook products through at the advised temperatures and use different utensils and chopping boards for raw and cooked food.’

The FSA recommends the following:

What action is being taken on behalf of consumers?

The FSS and FSA are working with a range of UK-based and international organisations to address the causes at source of the 511 UK cases of salmonella that occurred between January 2020 and May 2021 and to try to prevent further cases.

The FSA says: ‘Authorities in Poland and UK retailers have taken action to reduce the risk from these products. Where non-compliant or unsafe food has been identified in the UK, action has been taken to protect consumers.’

Symptoms generally develop within a few days of eating the contaminated food, according to the NHS, although sometimes they can develop within just a few hours. In some cases, they might take a few weeks to show.

If you contract food poisoning, it’s important to keep your fluid intake up to avoid dehydration, although fizzy drinks and fruit juice are best avoided because they can exacerbate diarrhoea.

In the majority of cases, symptoms will pass within a week and you’ll be fine to recover at home.

However, for some people there is a small risk of severe illness and the need for hospital care, so if you become ill and you’re concerned it’s important to seek medical help.

Tags:  can i buy a blood pressure monitor with my fsa