If you or someone you know is diabetic, it is a good bet that a glucose meter is a regular fixture in your life. They are cheap and plentiful, but they are actually reasonably high tech — well, at least parts of them are.

The meters themselves don’t seem like much, but that’s misleading. A battery, a few parts, a display, and enough of a controller to do things like remember readings appears to cover it all. You wouldn’t be surprised, of course, that you can get the whole affair “on a chip.” But it turns out, the real magic is in the test strip and getting a good reading from a strip requires more metrology than you would think. A common meter requires a precise current measurement down to 10nA. The reading has to be adjusted for temperature, too. The device is surprisingly complex for something that looks like a near-disposable piece of consumer gear.

Of course, there are announcements all the time about new technology that won’t require a needle stick. So far, none of those have really caught on for one reason or another, but that, of course, could change. GlucoWatch G2, for example, was a watch that could read blood glucose, but — apparently — was unable to cope with perspiration.

Even the meters that continuously monitor still work in more or less the same way as the cheap meters. As Hackaday’s Dan Maloney detailed a few years back, continuous glucose monitors leave a tiny sensor under your skin and measure fluid in your body, not necessarily blood. But the way the sensor works is usually the same.

For the purposes of this article, I’m only going to talk about the traditional meter: you insert a test strip, prick your finger, and let the test strip soak up a little bit of blood.

However you slice it, the real magic is in the test strips. However, how you measure the strip can vary. By far the most common way is to use an amplifier to read the very small currents. However, you can also use precise LEDs and a photodiode — this also requires a very precise current reading, an extra chemical, and precise timing, so you don’t see optical-based meters very often today. The exception is that there are test strips that you can read by simply looking at the color of the strip. This isn’t very accurate, but it is inexpensive and convenient. For most people, the exact blood sugar reading isn’t necessarily as important as knowing if it is normal, high, or very high, for example, so eyeballing the color off a strip is sometimes adequate. 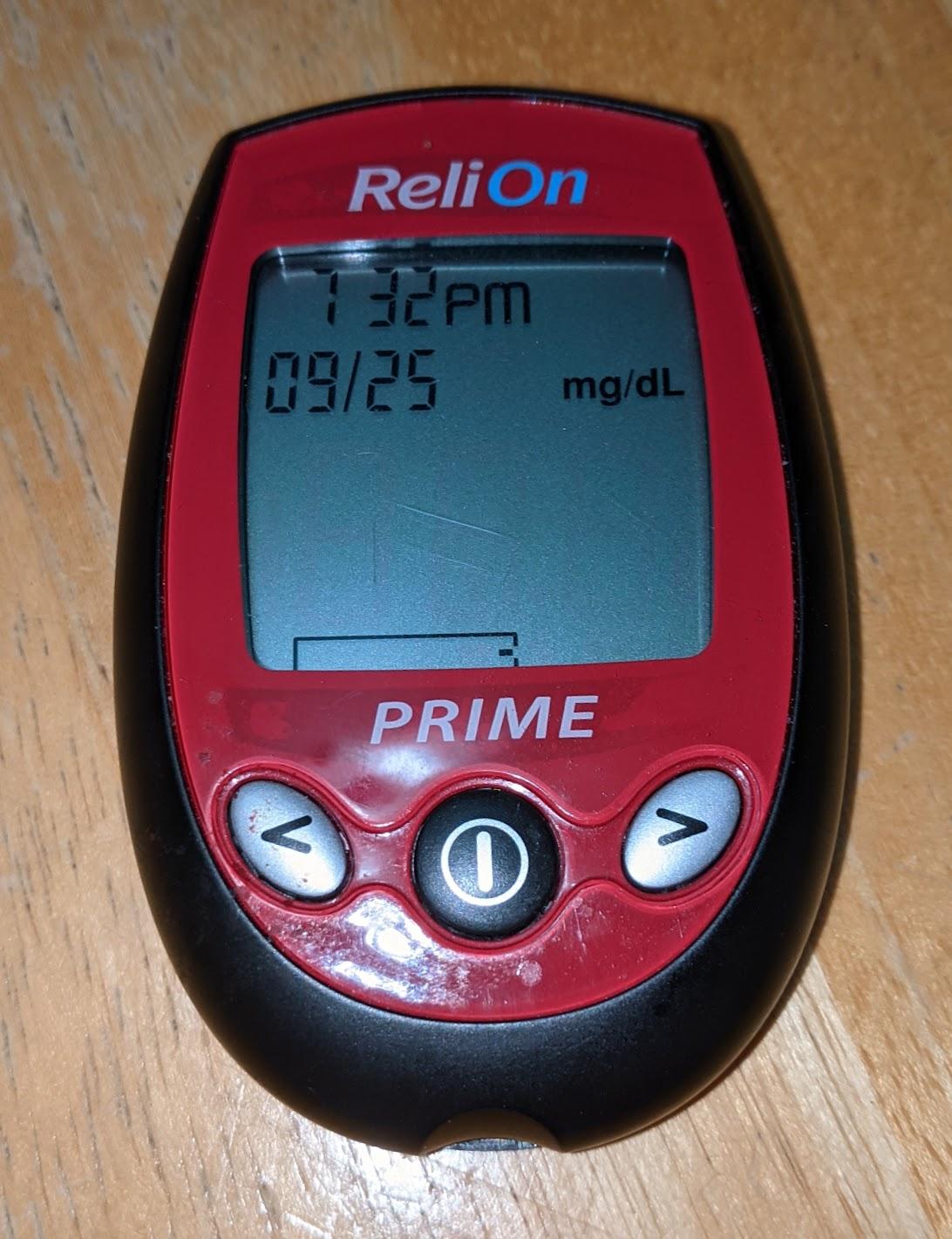 The usual test strip uses a chemical to react to the blood sample. Each strip type can be different, using a different chemical reaction or a different number of electrodes. However, there are a few common elements.

The picture below shows two different brands of strips with and without the covers that hide all the workings. Blood enters on the left and the right side has contacts that connect to the meter.

If you have to stick your finger with a needle several times a day, you get pretty sensitized to how big that needle is. Over time, blood glucose meters have become more and more sensitive so they require less blood. Less blood means you can use a thinner needle and maybe not set it to go so deep. Anything that can reduce the amount of blood required per test is going to help sell meters to patients. A state-of-the-art meter today might use as little as 300 picoliters of blood. A hungry mosquito will take about 10 microliters, so 300 picoliters is a very tiny amount indeed. In general, capillary action draws a known amount of blood into the strip after you stick your finger.

A strip may have more than one cell for different purposes. For example, one cell may simply detect that blood arrived at the location, implying that the previous cell should offer a valid reading. Each cell will have at least a pair of electrodes. In some cases, a cell will have more than two electrodes and, in that case, the meter will apply a bias current to one electrode. This increases complexity but can provide a better result.

Some meters elect to measure the total electric charge produced by the chemical reaction. Others measure the charge at a particular time in the reaction and use that to deduce the total.

The test strips, by the way, are where all the money is made since they are disposable. Just like Radio Shack used to give away flashlights to sell batteries, glucose meters are often given away free or sold at very low prices, knowing that you will then need to buy a steady supply of strips to make the meter useful.

Most meters today don’t require coding, but this was common in the past. Different batches of test strips would have different characteristics, so you’d need to enter a code from the strips into the meter to get accurate readings. If you are hardcore, you can also get calibration solutions to test the accuracy of the meter.

Some meters will use test strips that communicate their code to the meter automatically. This might be via some mechanism on the strip or in the container used for a container of strips. While some test strips may have a cell dedicated to calibration, most strips are now simply produced to a tight tolerance so that the coding can be easily automated by either using a single calibration constant or by detecting one of a few constants using a simple connection on the strip.

The technology behind these sensors is relatively recent. The original work dates back to the late 1950s with practical sensors similar to what you see today showing up in the early 1960s. However, the amount of blood required, the accuracy, and — of course — all the microcontroller whiz-bang features have improved over the last half a dozen decades. It is amazing, though, that even after this many years, there hasn’t been a better way found to noninvasively measure blood glucose.

If I asked you to go to the drugstore and pick up a nanoammeter, you probably wouldn’t have guessed to go to the diabetic testing section. I am somewhat surprised we don’t see more of these meters — or the chips made to drive them — hacked into other instruments although we have seen at least one repurpose some of the electrochemical circuitry. Meanwhile, we are still waiting for the noninvasive glucose monitoring system we keep hearing about.

Tags:  how to use relion blood pressure monitor