The incidence of esophageal adenocarcinoma (EAC) has increased markedly in the last few decades.1,2Barrett’s esophagus (BE), caused by long-standing pathologic exposure to gastroduodenal refluxate, is known to be a precursor lesion of EAC.3–7Therefore, preventing EE is important for suppressing the onset of BE and EAC. The prevalence of gastroesophageal reflux disease (GERD), including erosive esophagitis (EE), which is strongly associated with obesity and metabolic syndrome (MS), has been increasing in both developed and developing countries including Japan and western countries from 1970 to 1990.8,9Although obesity and MS are important for onset of EE,10–12EE is sometimes undiagnosed in individuals with MS and the prevalence of EE in the non-obese population is not low.13However, there are few reports about EE at various stages of MS and the difference between MS subjects with and without EE. This study aimed to measure the differences in clinical factors associated with EE among subjects with non-MS, pre-MS, and MS, and to measure the differences in metabolites between subjects with MS, with and without EE.

This single-center cross-sectional study was performed at the Shikoku Central Hospital of the Mutual Aid Association of Public School Teachers in Shikoku region, Japan. A total of 14,227 healthy subjects who underwent comprehensive medical surveys, including physical examinations, blood-test screening, and examination of the stomach (esophagogastroduodenoscopy or upper gastrointestinal series) between April 2017 and March 2019 were enrolled. Subjects with a history of digestive tract surgery, who took medications such as H2-receptor antagonists or proton pump inhibitors, or who were diagnosed with gastric or esophageal cancer at the time of esophagogastroduodenoscopy were excluded from this study. The study protocol was approved by our institutional ethics committee, and all procedures were performed in accordance with the Declaration of Helsinki. All subjects were informed that their clinical data might be analyzed retrospectively, and informed consent was obtained.

We used the Japanese diagnostic criteria for MS.14The criteria used for diagnosing MS in this study were as follows: waist circumference (WC) greater than 85 cm for males or 90 cm for females, and the presence of two or more of the following: (1) impaired glucose tolerance (IGT): fasting plasma glucose (FPG) ≥110 mg/dL or medication for diabetes; (2) dyslipidemia: triglycerides (TG) ≥150 mg/dl, and/or high-density lipoprotein cholesterol (HDL-C) < 40 mg/dL or medication for dyslipidemia; and (3) hypertension: blood pressure ≥130/85 mmHg or medication for hypertension. In this study, we designated individuals who fulfilled these criteria as the MS group. Individuals who did not fulfill the MS criteria were divided into two groups as follows: the non-MS group was defined as individuals having no MS component; the pre-MS group was defined as individuals having a WC > 85 cm for males or 90 cm for females along with one other component of MS.

Serological Helicobacter pylori (H. pylori) status was assessed using an enzyme-linked immunosorbent assay (Eiken Chemical, Tokyo, Japan). The seropositive antibody titer threshold for H. pylori infection was set at 3 U/mL. An increase in Δ13C values of >2.5‰ by urea breath test (UBT) indicated positive results. In this study, non-H. pylori infection was defined as follows: (1) subjects with H. pylori antibody seronegativity and/or UBT negativity, and no endoscopically atrophic gastritis (AG); (2) subjects who did not undergo a H. pylori antibody test in this study, had no history of eradication therapy, had endoscopically regular arrangement of collecting venules, and absence of AG; and (3) subjects with a history of eradication therapy and confirmed for the absence of H. pylori using UBT. We instituted a strict definition of non-H. pylori infection; therefore, individuals not fulfilling the above criteria were defined to have H. pylori infection in this study.

Standard endoscopic examination of the esophagus, stomach, and duodenum was performed by endoscopy specialists from the Gastroenterology Department of our hospital. All examiners had more than 10 years of experience in endoscopy. Esophagogastroduodenoscopy was performed using a conventional single-channel endoscope (GIF-H290, -HQ290, or -H290Z; Olympus, Tokyo, Japan). A hiatal hernia was diagnosed by the presence of a gastric wall above the diaphragmatic hiatus unaccompanied by underlying longitudinally arrayed vessels.15EE was diagnosed according to the Los Angeles classification system.16In this study, EE higher than grade A was defined as EE. Endoscopic findings from each subject were validated independently by a double endoscopy specialist.

Assessments of metabolomics were performed for 34 subjects with MS during 2019 April. The method of liquid chromatography coupled with tandem mass spectrometry (LC-MS/MS) (Nexera UHPLC system with on-line LC-MS 8040, Shimadzu Corporation, Kyoto, Japan) was adopted for the metabolomics. The levels of the target metabolites were determined from the peak areas in mass chromatography, monitoring each mass-to-charge ratio of the individual target, and represented as relative amounts (relative areas) after normalization based on the peak area of the internal standard. In all, 101 primary metabolites including amino acids, organic acids, and so on were measured, and a total of 52 metabolites were obtained from subjects with MS.

Continuous variables were expressed as mean ± standard deviation (SD), and categorical data were expressed as counts, with percentages shown in parentheses. Differences were considered to be statistically significant at P values of less than 0.05. Statistically significant differences in the quantitative data between the two groups were determined using the χ2-test or Mann–Whitney U-test. Statistically significant differences among three groups were determined using the m × n χ2-test or Kruskal–Wallis test. If the Kruskal–Wallis test revealed differences between groups, post hoc pairwise comparisons were performed using the Mann–Whitney U-test with Bonferroni correction. Factors with a significant influence on EE prevalence were determined using univariate analysis. All parameters with P-values <0.05 by univariate analysis were assessed using stepwise multivariate logistic regression analysis. Using a logistic regression model, both odds ratio (OR) and 95% confidence interval (CI) were calculated. Correlations between variables were assessed by calculating Spearman rank correlation coefficients. All statistical analyses were performed using MedCalc Statistical Software for Windows (MedCalc Software; Ostend, Belgium).

Supplementary Figure 1shows the flow diagram of subject enrollment in this study. Of the 14,227 subjects who underwent a regular health checkup between April 2017 and March 2019 at our hospital, we excluded 1,487 subjects referring to individuals who did not get evaluated for MS, 7,130 subjects who did not undergo esophagogastroduodenoscopy or selected the upper gastrointestinal series in substitution for esophagogastroduodenoscopy for the evaluation of the upper gastrointestinal tract, and 125 subjects who fulfilled the other exclusion criteria; the remaining 7,097 subjects were enrolled in the study. The baseline characteristics of the 7,097 subjects are summarized in Table 1. The prevalence of non-MS, pre-MS, and MS groups was 69.2%, 13.6%, and 17.2%, respectively. 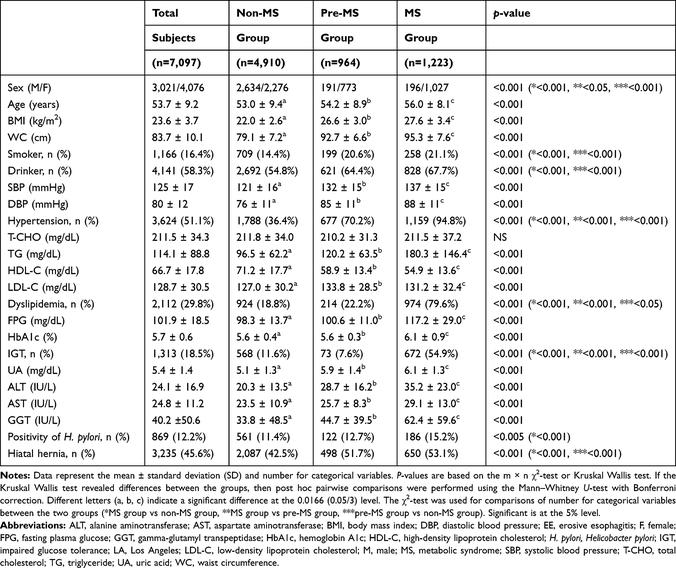 The present study showed that values of physical measurements such as body mass index (BMI) and WC, and almost all factors related to hypertension, dyslipidemia, and IGT were progressively greater in the non-MS, pre-MS, and MS groups, in accordance with previous reports that BMI, WC, blood pressure, HOMA-IR, and other factors increased with the number of MS components.17–19EE prevalence in the pre-MS and MS-groups was about two times higher than that in the non-MS group. On the contrary, EE prevalence in the non-MS group was 14.7%; as this prevalence was not low,13this point cannot be ignored. In addition, the ratio of high EE severity increased progressively in non-MS group, pre-MS group, and the MS group; however, independent predictors of EE varied among the three groups. These findings imply that the prevalence, severity, and risk factors for EE differ at various stages of MS.

Several previous studies have shown that alcohol consumption is a risk factor for GERD. Drinking is considered to be associated with an increase in gastric acid secretion and a decrease in LES pressure.23,25–27The present study showed that drinking was not a significant factor for EE in the non-MS group whereas it was a significant factor for EE in the pre-MS and MS groups. These results suggest that the influence of alcohol consumption on EE may differ among the non-MS, pre-MS, and MS groups. For example, the difference in the calorie intake by drinking, motility of the digestive tract by IGT, and abdominal fat might have contributed to the results in the present study.28–30

In some previous reports, H. pylori infection in patients with EE was significantly less than that in patients without EE; further, H. pylori serostatus has shown an inverse association with GERD.12,34This may be caused by ammonia generation, decreased acid production due to gastric atrophy, and a neuroimmunological influence.34The present study showed that the prevalence of positive H. pylori infection in all subjects with EE (67/1,348, 5.0%) was significantly lower than in all subjects without EE (784/5,749, 13.6%), and that absence of H. pylori was a highly significant predictor of EE in the three groups.

Metabolomics involves the measurement of large numbers of low-molecular-weight metabolites including sugars, amino acids, and hormones. Although several studies have provided insight into the pathogenesis of several cancers,35–41few studies have investigated the association between metabolomics and GERD, including EE.42An increase of glutamine in glutaminolysis is a notable feature of tumor cells.43Under hypoxic conditions, glutamine is converted to glutamate and further to α-ketoglutarate by glutaminase and other enzymes to enable adenosine triphosphate (ATP) production through the tricarboxylic acid cycle.44,45The present study showed that glutamine levels were significantly lower in subjects with EE than in those without EE. Hypoxic conditions may advance further in subjects with EE than in those without EE in MS. However, there may be no association between hypoxic conditions and the developing from EE to EA because in fact, most patients with EE do not progress to EA. The association between cancer and hypoxanthine varies with the kind of cancer. Hypoxanthine levels were significantly higher in subjects with EE than in those without EE in MS in the present study. Several studies have reported that enzymes associated with the purine biosynthetic pathway are enhanced in tumor cells because purine nucleotides are essential for tumor cell proliferation,46and an increase in hypoxanthine is thought to most likely reflect an upregulation in purine metabolism due to hypoxia and oxidative stress. We found that the lactic acid levels were significantly higher in subjects with EE than in those without EE. Lactic acid is a known component of the Warburg effect and aerobic glycolysis, and dysregulated lactate metabolism is thought to be one of the hallmarks of carcinogenesis.47Lactate can serve as an energy source in several cancers, inducing glycolytic enzymes, which leads to an increase in ATP supply. Our results suggest elevation of lactate produced by the aerobic or anaerobic glycolysis pathway in subjects with EE. The metabolomic analysis in the present study identified three metabolites that were significantly correlated with EE in MS. Our results suggest metabolomics should be further investigated as a useful tool during medical checkup.

Several limitations exist in the present study that should be acknowledged. First, the present study is an observational single-center study. Multi-center studies are needed to validate our findings. Second, there was a possibility of selection bias because most of the participants in the present study were healthy individuals without symptoms. Whether hospitalized patients for EE would produce similar results to the present study is not clear. Thirds, the definition of non-H. pylori infection in the present study was strict. Therefore, there was a possibility of false positives for H. pylori infection. Finally, the number of subjects who were investigated with metabolomics was small because metabolomics is not usually included in medical checkups. Therefore, it was difficult to analyze for the severity of EE using these subjects. Further large-scale clinical studies on EE in both patients and healthy individuals will be required in the future.

We demonstrated that the prevalence of EE in the pre-MS and MS groups was higher than that in the non-MS group. The ratio of high EE severity increased progressively in the non-MS, pre-MS, and MS groups. Although H. pylori is a common significant independent predictor of EE, other independent EE predictors were different among the three groups. Lifestyle factors such as smoking and drinking are important for EE, and several metabolites may help identify the risk of EE in individuals with MS.