Wearable pressure sensors are commonly used in medicine to track vital signs, and in robotics to help mechanical fingers handle delicate objects. Conventional soft capacitive pressure sensors only work at pressures below 3 kPa, however, meaning that something as simple as tight-fitting clothing can hinder their performance. A team of researchers at the University of Texas has now made a hybrid sensor that remains highly sensitive over a much wider range of pressures. The new device could find use in robotics and biomedicine.

The most common types of pressure sensors rely on piezoresistive, piezoelectric, capacitive and/or optical mechanisms to operate. When such devices are compressed, their electrical resistance, voltage, capacitance or light transmittance (respectively) changes in a well-characterized way that can be translated into a pressure reading.

The high sensitivity and long-term stability of capacitive pressure sensors make them one of the most popular types, and they are often incorporated into soft, flexible sensors that can be wrapped around curved surfaces. Such sensors are popular in fields such as prosthetics, robotics and biometrics, where they are used to calibrate the strength of a robot’s grip, monitor pulse rates and blood pressure, and measure footstep pressure. However, these different applications involve a relatively wide range of pressures: below 1 kPa for robotic electronic skin (e-skin) and pulse monitoring; between 1 and 10 kPa for manipulating objects; and more than 10 kPa for blood pressure and footstep pressure. 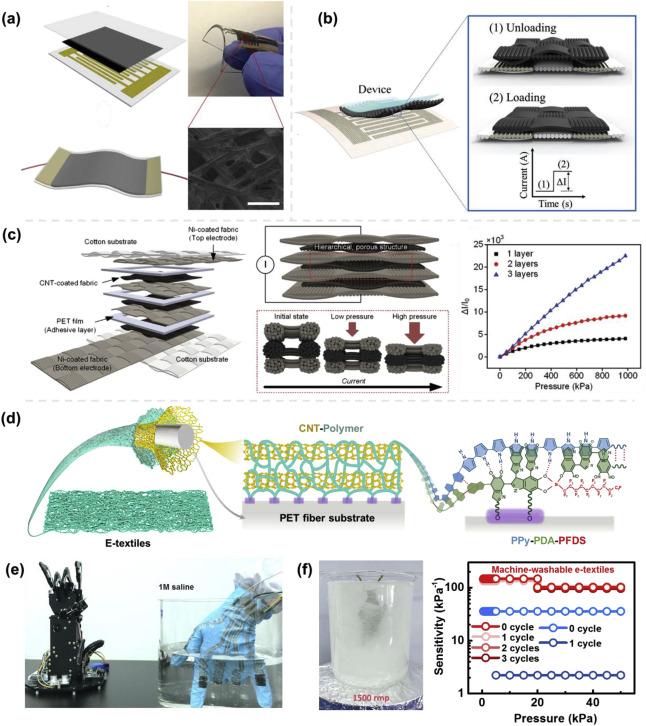 In the new work, researchers led by Nanshu Lu tackled the trade-off between the sensitivity of soft capacitive pressure sensors and the limited range of pressures over which they can operate. The device they created uses an electrically conductive and highly porous nanocomposite as its sensing layer, while incorporating an extra layer that acts as an insulator. This approach gives the sensor the properties of both piezoresistive and piezoelectric sensors, resulting in a hybrid device that boasts a high sensitivity as well as a large sensing range. Indeed, the researchers found that when they applied the sensor to a person’s forehead and then strapped a tight-fitting virtual reality headset over it, the sensor experienced only a negligible loss in sensitivity.

The new sensor can be wrapped around almost any object, Lu says, and it could be made into an array for pressure mapping. “The most obvious application is wrapping it around robotic hands and fingers to give them the ability to recognize objects by touching them,” she says, “but there are many other things it could do.”

The new sensor is detailed in Advanced Materials.

Register to unlock all the content on the site
Tags:  how to calibrate digital blood pressure monitor