During the Beijing 2022 Winter Olympics, corporate branding has been as prominent as ever.

Coca-Cola, Intel, Airbnb, Visa, Toyota, Bank of China, Samsung and Snickers are some of the global brands with their logos on display.

Omega is another immediately recognisable one.

But the Swiss watchmaker isn’t just a sponsor of the Games. As the official Olympic timekeeper it has been providing a service for hundreds of thousands of athletes and tens of billions of spectators since 1932, when it was chosen to supply stopwatches and to standardise timekeeping across the event. The current competition is Omega’s 30thOlympics.

It has also presided over a century of change.

Stopwatch holders at the finish line have given way to electronic timers and pioneering digital recording methods. It’s a change driven by Omega itself, whose motion sensors, positioning systems, photo-finish cameras that can shoot 10,000 images a second and its Quantum Timer, with the ability record time to the nearest millionth of a second, are all proprietary tech developed by the watchmaker alongside Swiss Timing, the company owned by Omega’s parent group, the Swatch Group.

These days Omega’s watches have a more commemorative role to play. Each Olympics is marked with a collectable limited edition. This year it’s the Seamaster Diver 300M Beijing 2022 Special Edition (pictured above).

But watches, or rather stopwatches, is where the association started, 90 years ago this year.

To mark the 2022 Winter Olympics, Petros Protopapas, Omega’s Brand Heritage Director and the manager of the Omega Museum in Switzerland, has chosen a dozen significant timepieces that go some way to telling the story of one the most important and long-term partnerships in sport. (Omega's Worldwide Olympic Partnership currently extends through to the 2032 Olympic and Paralympic Games.)

“Evidently there are way too many to choose from,” Protopapas tells Esquire. "So it’s going to be a mix between actual stopwatches and chronographs for timekeepers as well as wristwatches and pocket watches inspired by the Olympic Games.

“Here’s what I propose.”

“This represents the first time the Olympics were timed by just one type of stopwatch, or chronograph. At every Games up to that point you had different thumbs on different chronographs all made by different manufacturers. You might have 16 different results for one race. A jury would then average the results. There was no fairness! And the most important idea of Olympic timekeeping is to give justice to all the athletes who give their best. 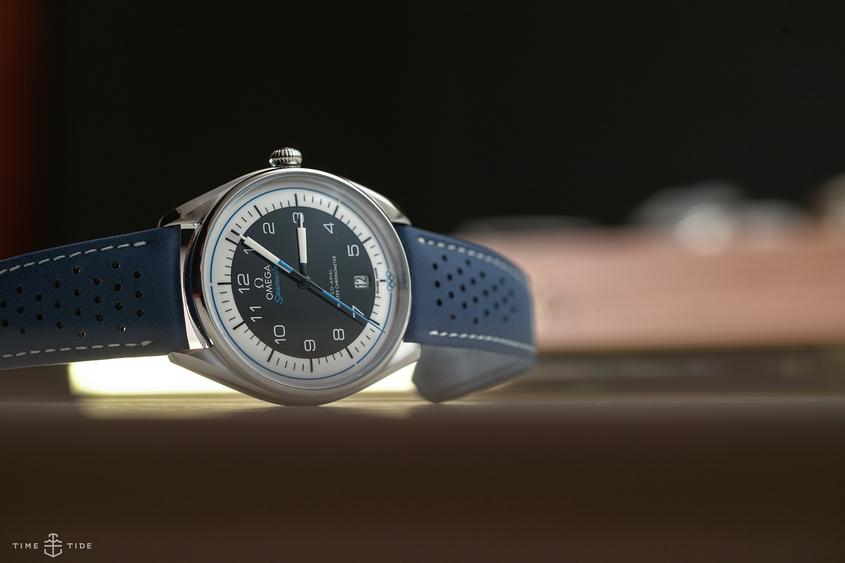 “When the Olympic Committee looked for an official timekeeper, they wanted watches that were available off the shelves. They didn’t want prototypes, or watches that were specially made. They needed to know that they could buy them again, if they broke – even during the Games. Omega was able to respond to this brief.

"The other factor was that Omega shipped every single stopwatch from Switzerland to England, where the Kew Observatory tested them. They received their rating certificate, then they were shipped back to us [in Switzerland] and then we shipped them to the Games in California. If you went to a store in 1932 you’d be able to buy the exact same stopwatch used at the Olympics. It just wouldn’t be officially certified by the Kew Observatory”.

“This is the very model that timed Roger Bannister’s legendary run at the 1952 Olympics in Helsinki, when he became the first athlete to run a mile in less than four minutes. You can see it on display at the Omega Museum in Biel, Switzerland. The seconds counter in the middle competes one 360 degrees turn every 30 seconds. You’ll see it has prominently one central hand and one small hand hidden underneath at 12 o’clock.”

“The first time that Omega ventured into releasing a watch that showed the public what we do for the Olympic Games. The first “commemorative edition”, if you like – the Seamaster XVI. It commemorates the 16thOlympics of the modern era and also the first time the Games were held in the Southern Hemisphere, in Melbourne, Australia. It also commemorates the fact that Omega was awarded The Cross of Merit – a medal for its achievements in timekeeping. These models crop up at auction houses from time to time and they can fetch serious money, depending on their condition.

"There’s one model that’s particularly rare, with a lacquer dial, applied ‘XVI’ numerals and a 3D replica of the Cross of Merit, that was produced in very limited numbers. Then there’s a version that's even rarer that was given to Pope Pius XII in 1956, with a Vatican crest on the dial.

"Neither dignitaries from the church, nor politicians, are allowed to receive valuable gifts, so it didn’t stay in the Pope's hands long.

“Five years ago our customer service team in Italy received an inquiry about this watch. It belonged to an old lady, who said her father had received it as a gift from The Pope. She wanted it serviced and she really wanted for us to redo the dial. We calmly explained that it was a very important watch and she really should not touch the dial! We gave her a couple of options. She could sell the watch to us, or she could keep it in the family. Sadly she didn’t sell the watch! But she did listen to us and had a service – without touching the dial."

“Today it’s true that there are a few non-computerised, non-quartz wristwatches that are capable of measuring up to 100thof a second. But this watch was an early example of that and it is quite amazing. It has some incredible technology inside, a tiny balance spring that is so small that when it coils it doesn’t even make one full circle. In order to sustain being wound so tightly, when you start the chronograph you have something that is like a little internal hammer, a kicker, that is thrown at the balance wheel to kick it into motion, otherwise it doesn’t have enough energy on its own to start moving. It’s a very interesting horological complication, introduced in 1952."

“In 1968 Omega developed a whole series of professional chronographs and stopwatches for the Olympics in Mexico. The series was called ‘Space Night’ and the models all had cases made of a special slip-resistant material coloured in black. The design was considered way ahead of its time and the series was awarded with a top industrial design award, predating today’s Red Dot award [Annual international design prize. Previous winners have included Dyson and Apple]. No watches or timepieces ever received an industrial design award. Today everybody and their mother gets a Red Dot! Back then this made people think about watches in a different way.”

“Also in 1968 was the release of the Chrono-Stop model. It has a small, beautiful complication – a little button that does one thing. Whenever you want to time a short event you press it and it instantly resets the running seconds hand, so you can start it again. This time was such a great era for design, if you look at all the available colours and case designs. The times were changing, design was moving on, people were becoming louder everything was more colourful. An amazing time in film, music and art. And there were incredible adventures in design.”

“I love this. It’s one crazy watch. At the time it wasn’t particularly unusual in terms of its functions, but it was certainly unusual in the way it was arranged. It looks like a sports scoreboard, something I think was obviously intentional. When people talk about watches being quartz-powered as opposed to mechanical they always have connotations of cheapness, of plastic, of something throwaway. Let's be honest! But if you open up this watch you will uncover something completely unheard of for a quartz model. You have the digital chronograph on one side and the analogue watch on the other. Everything on the analogue side is of the same quality as any manual or automatic Omega watch of the time. And it has this wonderful rectangular design. It is plastic but the quality of these parts… it will never break. It is credited as the first watch to have both an analogue and a digital display.

“You’ll sometimes see the Chrono-Quartz referred to as ‘albatross’. That’s because Omega gives codenames to its secret projects. Countries, cities and states for the models. Movements are always referred to as birds.”

“From 1980 onwards we released skeletonised commemorative versions of the original chronograph. They used the same movements utilised back in 1932, but finished to the highest standards. These were literally all "leftovers” we found. It’s cool because it's one of those rare cases you find literally gold in your drawers – I don't know, 100 or 1,000 pieces that we found that were unused. And then these were serviced, completely renewed. Then they were given to specialists to be skeletonised.”

“Three limited editions of 100 watches, each in white, yellow and rose gold. These editions represent the best of both worlds for a collector. You get history and you get the high-end horology. The dial, the leaf hands, the enamel, the polished case are all as close as it gets to the original 1932 design. Then, at the same time, if you turn the watch around you get the high horology of the movement. They are wonderfully finished historical renditions."

“The 2008 re-edition of the Seamaster XVI, released during the 2008 Summer Olympic Games in Beijing. There were just 88 released and they were only available to purchase during the Games. After the last day they were sold out. It was no good going into an Omega boutique and saying ‘I want that one!'”

“A Seamaster collection in five colours that’s based on the 1968 ‘Space Night’ watches. I love the fact this gives you a wearable, design version of one of my absolute timekeeping favourites. If you look at the hands, the numbers, everything... it is that same watch distilled. They came as a set, but you could also buy them on their own.”

A pop-up, the Omega Olympic House and boutique is open until the end of February in the Burlington Arcade, 1 Piccadilly, London W1J 0QJ.omegawatches.com

This content is created and maintained by a third party, and imported onto this page to help users provide their email addresses. You may be able to find more information about this and similar content at piano.io
Tags:  how to make stopwatch digital on apple watch