Sony QD-OLED TV Sneak Peek: This Might Be the Best TV Ever

Sony's 2022 television lineup has a lot of new high-end features and picture quality extras, from a remote finder to mini-LED backlights, but the most anticipated hands-down is its QD-OLED TV, the A95K series. Using this new screen technology, Sony promises improved color and viewing angle compared to current, conventional OLED TVs -- which already deliver the best picture quality on the market. I finally got the chance to see QD-OLED in person and from what I saw, it delivers on that promise.

At a private demo in New York last week, Sony engineers showed me a 65-inch A95K set up next to an A90J, the company's best 2021 OLED TV, as well as Sony's professional-grade OLED reference monitor. They played a series of the same test patterns and video on all three displays simultaneously, similar to how I review TVs. The most remarkable difference I saw was deeper, more saturated color of red, for example a woman's dress and buildings at night, on the QD-OLED. Differences in other colors were less obvious, but my overall impression was that QD-OLED did indeed have better color.

I saw slightly better fidelity from extreme off-angle on the A95K -- the A90J showed more color shift as I moved to the extreme edges, away from dead center -- but you'd have to have a really crappy seat on the couch to notice. The QD-OLED also showed slightly smoother treatment of film grain, which Sony's engineers claimed was a benefit of the way QD-OLED creates light. Based on Sony's demo, I'd say QD-OLED TVs like the A95K have the potential to outperform "regular" OLED models from Sony as well as from other TV makers like LG.

But I'm not ready to declare QD-OLED the best TV… yet. First off, Sony says the A95K it used in the demo isn't a production version. It's an "early prototype," so the final shipping version could be different. Second, Sony's demos highlighted the A95K's strengths, but I still caught a couple of weaknesses where the older, non QD-OLED actually looked better. The skin tone in one scene was a bit closer to the reference on the A90J, and the screen of the A90J rejected more ambient light than that of the A95K, which had a grayer, not-exactly-black finish. The latter difference impaired the QD-OLED's contrast under bright lights but wasn't an issue under dark, home theater-style lighting.

It's worth mentioning that highlights didn't look appreciably better on the QD-OLED, and shadow detail between the two was also similar. Sony's engineers claimed the QD-OLED does a better job in near-black shadows, but none of their demos showed it as far as I noticed. 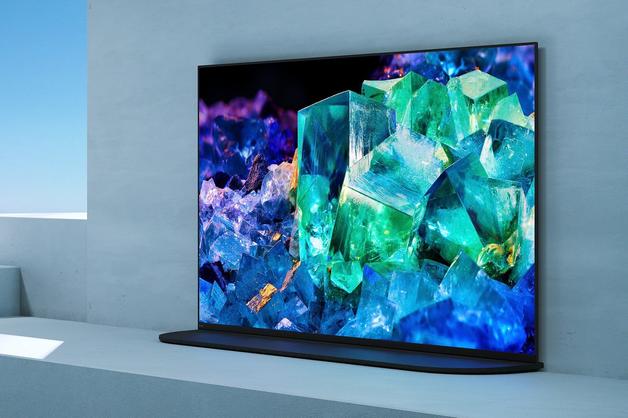 I'm looking forward to checking out QD-OLED TVs like the A95K and Samsung's S95B in my lab, with my own material, and the opportunity to measure and compare them against LG's latest 2022 OLED TVs. Until then, I'm not ready to declare a winner.

Sony didn't specify when I could get a review sample, although it did say the A95K and its other 2022 TVs would ship in spring. It also has yet to officially announce pricing, but indications peg the 55-inch at $3,000 and the 65-inch at $4,000, more than double the price of my current favorite 2021 OLED TV, the LG C1. If those indications prove correct, the Sony A95K will also be significantly more expensive than Samsung's S95B QD-OLED TV, which costs $2,200 for the 55-inch size and $3,000 for the 65-incher.

What's so special about QD-OLED?

The myriad types of similar-sounding TV terms can get confusing, so bear with me. OLED technology delivers the best TV picture quality available today. Every OLED TV you can buy right now, and most upcoming 2022 models including 2022 Sonys in the A80K and A90K series, use the conventional OLED display panels, not QD-OLED. They rely on yellow and blue OLED materials to create "white" light and filters to mix in other colors, a technology known as WRGB OLED.

The new panels in the A95K series use a different manufacturing method that combines a blue OLED base layer with red and blue quantum dots, hence the "QD." The A95K is one of two QD-OLED TVs announced for 2022. The other is the Samsung S95B, which I have yet to see in person.

The introduction of QD-OLED brings competition to the big-screen OLED TV market. A company called LG Display currently manufactures all of the OLED TV panels available today and supplies them not only to LG Electronics but also to Sony, Vizio, Philips, Panasonic and others worldwide.

Sony said it was unable to disclose information about the panel vendor for the A95K, but rumors point to Samsung Display, which first announced its QD-OLED ambitions in 2019 with an $11 billion investment in a new factory in Korea.

TVsSonyNotification on Notification off TV & Audio
Tags:  why does my samsung watch have a different phone number