Samsung Note series is all about great looks and display along with stylus pen, which is called as S Pen to be precise, majorly focuses on showcasing presentations, doodling, creating artwork and more.

Samsung has recently launched the new S series Note with Stylus recently named as Samsung Galaxy S22 Ultra which has been priced at Rs. 1,18,999. Though the pricing stands too high as compared to any other Samsung smartphone which launched recently but does it fit the bill? We reviewed the device to know if the device is worth a shot at such a price point.

Indeed a premium looking device with great looks, sleek design, curved display and huge cameras at the back panel. Premium defines well when we speak of Samsung Galaxy S22 Ultra. This note has a rectangle design with S Pen placed at the lower panel. We got a Dark Red colour device and it looked very unique. The only drawback which we can state was that the device is very big to be operated from one hand (As we know that its a Note from Samsung), but also it is very slippery. Also, the smartphone is boxed with just a charging cable that supports dual C-Type edges and no adaptor (so, if it's your first S series smartphone from Samsung, then you will have to get the adaptor from the market with the additional cost of around Rs. 2,500). 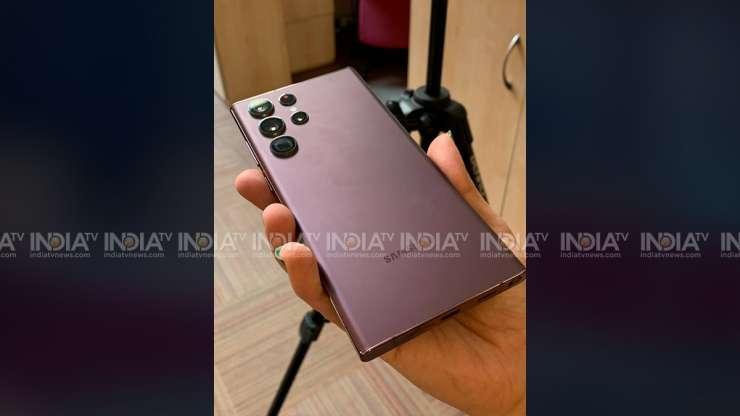 You will have to be very cautious when you carry this device- why? Because, one, it’s worth a lac and it comes with a thin and slippery smooth body- so yes, we have to be a little careful with our grip.

The Galaxy S22 Ultra features a four-camera system- with a 12MP Ultra-Wide shooter, a 108MP wide shooter, and two 10MP Telephoto (3x and 10x optical zoom). And when I speak of the performance, it is beyond words. It delivers great daylight as well as night light photography. Also, the closeup shots are amazingly clear and the long shot has so much bandwidth to zoom in without compromising with the quality of the pictures and videos taken from the device.

In the front, the smartphone comes with a 40MP selfie shooter with great picture delivery. The details are so crystal, that I literally want to compare it with the DSLR, to an extent. I just have to state that this is one of the best camera phones I reviewed this year, after the Samsung Galaxy S21 FE 5G.

With a 5000mAh battery, Galaxy S22 Ultra can last for a day with fine usage, including calls, social media, photography, zoom meetings etc. The device is capable to perform perfectly well, all thanks to Qualcomm Snapdragon 8 Mobile Gen 1 processor which enables the device to hold so many activities at a go without any lag. But the battery is the point which I expected more out of the device. If the phone is being used for heavy graphic gaming, long meeting sessions and binge-watch, then the battery will exhaust quite fast. Also, the device does support fast charging, and the charging panel is C-type too, but because of the unavailability of the adaptor, I charged the device with another Samsung charger that I have been using on my devices, and it took a little longer to charge- certainly because the adaptor for Samsung was not there and I believe the result would have been different (expecting fast charging). But certainly, the battery could have been better at this price point.

Overall, Samsung Galaxy S22 Ultra is an amazing device with the best camera, great processor, premium design, and S Pen capabilities, which will certainly make you look out of the crowd. But the battery was something that I believe could have been stronger at this price point, because if someone would like to have a device equivalent to the price point of the Apple iPhone 13, then the battery is something that a customer does not like to compromise with. But yet, this device could be certainly like a feather on your hat, to compliment your status quo.