How to use an Android Wear smartwatch with your iPhone

The Apple Watch might be seriously desirable to iOS fans, but it's expensive, difficult to get hold of and there's no denying the fact that a square display has split opinions. If, like us, you prefer a round smartwatch, there aren't any official options if you happen to own an iPhone. Google's Android Wear is currently exclusive to its own Android operating system, but thanks to a clever pair of apps it's possible to make it play nicely with an iOS device. We've just put it to the test and can confirm it works perfectly on an iPhone 6 with a Moto 360, so we've put together a handy guide to show you how it's done - just in time for Motorola's Spring Sale, where you can grab a Moto 360 for £50 off.

The following guide uses freely available apps, doesn't require jailbreaking your iPhone and doesn't need a rooted Android Wear device either, making it the most user-friendly way to use Android Wear on iOS discovered so far. However, this is a WORK IN PROGRESS process designed by third party developers, so it should come as no surprise that you won't get the complete Android Wear experience. If you don't have convenient access to an Android device, you won't be able to download updates, new watch faces or new apps to the watch either.

You'll still be able to accept or reject calls, get notifications and control music playback from your wrist, but most other features like custom watch faces, watch apps and Google Now don't yet work. With that in mind, let's get started. 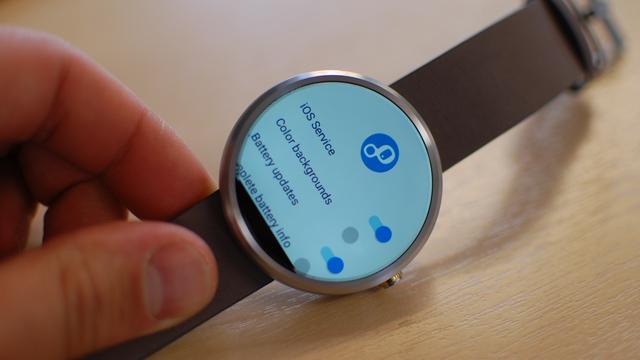 Before you can pair an Android Wear device to an iPhone, you'll first need to set it up on an Android-powered smartphone. That means you'll need the Android Wear watch itself, your iPhone, and an Android smartphone to hand. You'll also need an internet connection, as you need to download two apps, or three if you don't have the Android Wear app installed: Aerlink: Wear Connect for iOS from the Google Play Store and BLE utility from the iTunes app store.

First, pair the Android Wear device to the Android smartphone using the Android Wear App. It talks you through the process and should only take a few minutes, including Bluetooth pairing and initial setup. Our Moto 360 then downloaded a firmware update (which can't be installed unless the battery is at least 80% charged) and rebooted, adding another 10 minutes to the task. Once you're fully set up on Android, you can download Aerlink: Wear Connect for iOS and install it. This will put an Aerlink app on the watch, which can be accessed by tapping the main watchface and selecting it from the list of available apps and settings.

This will bring up a series of toggle options, but the only one you need to tap is 'iOS Service'. Once this is enabled, swipe to dismiss this menu and a new card saying 'Disconnected' should appear. You can now turn off your Android smartphone. Switch over to your iPhone and download BLU utility, open it up and tap 'Peripheral' at the bottom of the screen. Now tap the card displayed on the watch, and the two devices should connect. As this will most likely be your first time pairing the two devices, you'll be asked to tap in a PIN number. Once that's done, the card should say 'READY - you're good to go' and you're done.

The Android Wear smartwatch should now be paired to your iPhone. It will now display any notifications sent to the iPhone, from any app, let you answer (or reject) calls, and control music playback.

Have you followed our guide? Let us know how you get on in the comments!

Tags:  how to connect t55 watch to android phone