How to upgrade to a new Apple Watch

Upgrading from an old Apple Watch to a new Apple Watch isn't as easy as just buying one and putting it on. There's not much more involved, but what you do have to do is important to get right, unless you enjoy exasperation.

The problem is that the Apple Watch is still not yet its own, standalone device. While Apple has been steadily moving toward making it work entirely by itself, it's still the case that your Apple Watch has to be securely paired to your iPhone.

To move over to a new Apple Watch, you have to start by unpairing the existing one. It's perfectly possible to just pair up the new Watch with your iPhone, but what isn't at all possible is to sell or give away your old Watch without taking certain steps.

Unless you do this, that old Watch remains stuck to you and your iPhone like glue.

What you need to upgrade to a new Apple Watch

The job is to backup your old Apple Watch, unpair them, then pair the new Watch. To do this you're going to need:

How to get your old Apple Watch ready

Once you've done that, your iPhone will ask for your Apple ID password. Without that, you can't unpair the Watch.

With it, you do more than unpair, though. Altogether, entering your password here will unpair the Watch, remove it from your list of devices, and switch off the security Application Lock. 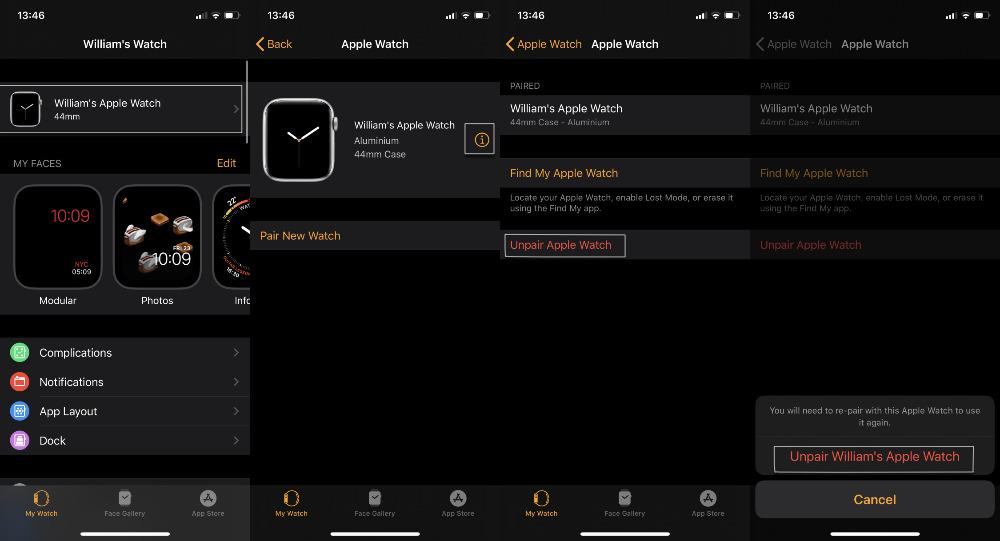 The unpairing action will also trigger a backup of data on your Apple Watch. This is how you make a backup so that you can move most of your settings to your new watch.

It actually backs up the great majority of your settings so that, for instance, your new Watch can quickly have that Face you spent ages setting up. However, it does not retain the credit or debit cards you use with Apple Pay, you're going to have to re-enter those in the new Watch.

Note that because it's backing up a lot of data from your Watch, the unpairing process can take several minutes.

Unless you're keeping both Watches, you need to unpair your old one.

Once that's done, however, your old Watch has been cut free from your iPhone, and you can give it away or sell it as you need. The rest of the job, adding the new Series 7, is now exactly the same as if this were your first-ever Apple Watch.

How to upgrade to a new Apple Watch

That's completed the pairing, this new Apple Watch is now tied to your iPhone. There are just a few more things you need to do.

Most of it involves waiting, because this process will take a few minutes to complete.

When the Watch prompts you to Restore from Backup, select the most recent backup listed. This is what will make your new Watch have the same settings and Faces as your old one.

Then you're asked about Shared Settings, except it's not really a question because you get no choice about the answer. Tap OK and your Watch will adopt the language and region settings from your iPhone.

Next you'll get asked to enter a new passcode, followed by several screens of information about health, fall detection and so on. Keep tapping Continue until the Watch shows a circle made of white dots, a progress circle.

When this is done, everything you absolutely have to do with your Apple Watch is finished. However, you're also going to want to work through re-adding any Apple Pay cards.

How to keep and use two Apple Watches

It's cheaper to just buy different Watch bands, but if you do have two Apple Watches, you can pair them both. Very nicely, Apple's various health and exercise systems can handle two or more Watches per person, too.

To switch between any of your Apple Watches, you do just literally take one off and put the other on. Once the other Watch is on your wrist and you've entered the passcode, that becomes the active one.

It's true that you never had to think about all this when you just had a Timex or a Rolex (delete according to your disposable income). However it is true now. Without going through these steps, you'll be fine with your new Watch but your old one will be a worthless brick to anyone you give it to.

Tags:  how to unpair apple watch from broken phone