How to improve iPhone call quality

If you are finding that you can't hear people clearly when you make phone calls on your iPhone you may be wondering whether there is a simple way to improve audio quality on an iPhone.

There could be an easy fix: perhaps there is dust or gunk in the speaker on your iPhone and a clean could help. Read: What you can safely clean an iPhone with.

If it's a brand new iPhone make sure that you have removed the plastic wrap from the iPhone because if this is stopping air getting to the microphone or speakers then they simply won't work! You'd be surprised how many people make this mistake - wanting to keep their new iPhone pristine, no doubt.

Another reason you might not be able to hear the audio on your call is if you are using headphones and they either aren't plugged in properly, or they aren't working via Bluetooth.

To check you are connected via Bluetooth go to Settings > Bluetooth and either turn it on, or turn it off and on again.

If you have an iPhone 12 or earlier then there is a handy feature that improved call quality. Phone Noise Cancellation reduces ambient background noise on phone calls when you're holding the receiver to your ear. This can improve the audio of your call, although it might have the opposite effect.

On iPhone 12 and earlier the feature was on by default, but could be turned off in Accessibility settings.

You might be wondering why you'd want to turn the feature on or off. Noise cancellation is a useful feature in calls with people in noisy locations, but some people might find the noise cancellation disorienting because it can cause pressure in the ears. This is likely why there is a setting to turn it off.

No Noise Cancellation on iPhone 13 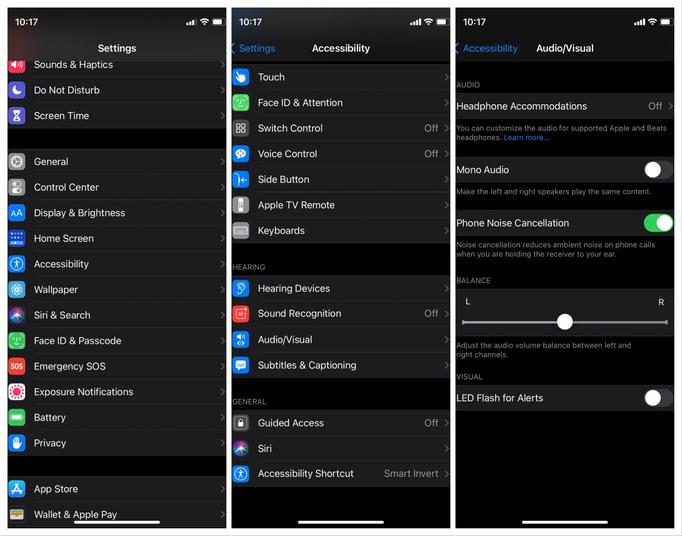 Apple has confirmed to a 9to5Mac reader that: "Phone Noise Cancellation is not available on iPhone 13 models, which is why you do not see this option in Settings."

Why Apple has decided to remove the Noise Cancellation feature, which improved sound quality during phone calls, is unclear. The company may have concluded that most people making phone calls were doing so via AirPods, which have their own active noise cancellation, but that does seem unlikely. Alternatively they may have decided to focus development on the similar feature that it listed to FaceTime.

You can also use Wi-Fi Calling as a tool to improve call quality. You'll need to route your call over a Wi-Fi network instead rather than a mobile/cellular one.

This may well improve the quality of your calls if you have a poor cellular or mobile data connection at home.

To check to see if the feature is turned on, go to:

Those who find it hard to hear callers due to background noise could use AirPods or AirPods Pro.

If you want to purchase AirPods check out our AirPods deals round up for the best price.

Read: How to use Noise Cancelling in FaceTime.

If you are having problems with FaceTime read: How to fix lags during FaceTime calls.

If none of these fixes work for you then there might be a fault with the iPhone, in which case if you are still within warranty (one year from purchase) Apple should fix it for you.