How to change the language on Wear OS

One of the most basic settings you’ll want to get right on yourWear OS smartwatchis which language it’s using – without that set correctly, you’re not going to be able to do much with your wearable.

The good news is this is mostly taken care of for you, as Wear OS will copy the language set on whichever smartphone the watch is connected to. If you want to make changes, though, here’s how to do it.

When you turn on aWear OS smartwatchfor the first time and tap the screen, the language selection menu will greet you first. After all, you’re not going to be able to work through the later setup screens if you can’t read the instructions.

Note that the initial “tap to begin” message is displayed in multiple languages, so you should be able to work out what to do eventually.

Just scroll through the language options until you find the one you need. In our case that’s going to be English, but you’ve got plenty of other options as well. Choose wisely if you want to be able to find your way around the watch.

However, this initial language setting will soon get overridden if your phone is set to a different language. Once you sync with an Android phone or an iPhone, the Wear OS smartwatch adopts the language of that device, no matter what language you picked on the first screen.

You can change the keyboard input language on your Wear OS smartwatch without changing the language used elsewhere on the menus and in the apps – handy if you’re chatting to some contacts in a different language. 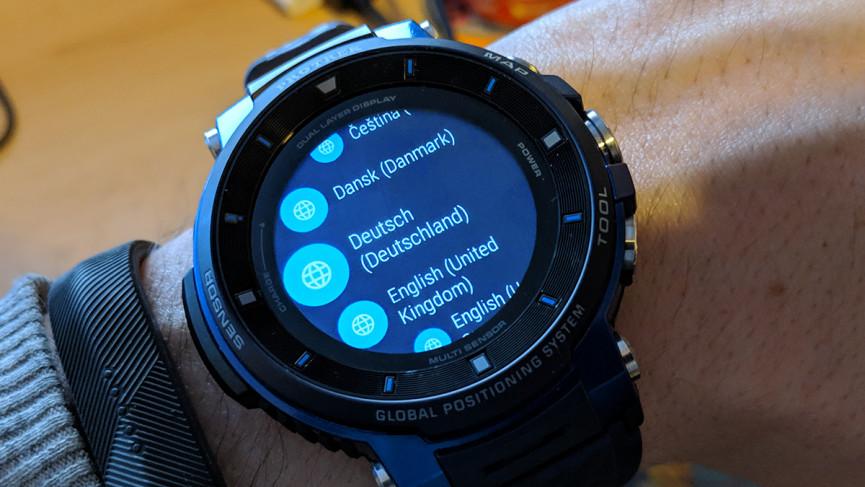 From Settings choose Personalisation, then Input methods, then Google Keyboard and Languages. Use system language is the option enabled by default, but you can add other choices from the list below. If you select multiple languages, you can switch between them via the globe icon on the keyboard.

This may or may not affect the actual letters you see on your watch keyboard, depending on the languages you select, but it will affect the autocorrect text that appears as you type. The quick snippet replies Google suggests don’t change, however.

You can’t change the handwriting input language from the Input methods screen – for this you have to use the main language set on the watch (and on your phone).

On Android, open up Settings then tap System, Languages & input, then Languages. Tap Add a language if you don’t see the option you want, then drag your choice up to the top of the list using the handles on the right.

The change should get copied over to your Wear OS watch almost instantly, but if not, try restarting the wearable (it’s under Settings, System, Restart).

On an iPhone, you need to open up Settings then choose General, Language & Region, and iPhone Language. Again, the change gets sent over to your Wear OS watch pretty much straight away, without any need to manually sync.

If you want to get back to the initial language screen on Wear OS, there’s only one option: resetting your watch. This will wipe any data and apps you’ve synced over, and break the connection with your phone – you’ll need to set up the wearable again from scratch.

Should you decide this is the route you want to take, open up Settings then pick System and Disconnect & reset. Tap through the confirmation screens and after a few moments you’ll have a Wear OS watch back in its original factory state.

From there you can choose the initial language on your watch again. You can set this to anything during setup, just like you did when you first unboxed the device, so you can make sense of the instructions that tell you how to connect to a phone.

Again though, the phone you connect to will override the language you picked on your watch as soon as a connection is made. Even if you pick the wrong language on your wearable to begin with, just sync it to a phone set to English as default, and all the watch menus and messages will switch to English.

Tags:  how do i connect my lefun watch to my phone