Support has officially launched for Apple Wallet to securely store driver’s licenses and state IDs on iPhone and Apple Watch. While there is excitement around the new feature, there are also a number of questions and concerns. Let’s dive into how Apple digital IDs work in the real world, where they’re available, where they’re accepted, and more.

After first unveiling support for digital IDs in the Wallet app back in June 2021 and pushing back the debut until March 2022, the first US state has officially launched support for the feature.

With support for Apple digital IDs, states can allow users’ existing physical ID to be stored securely on iPhone and Apple Watch with the same encryption that makes Apple Pay possible.

The goal with Apple digital IDs is to offer the security and privacy of iPhone and Apple Watch like Face ID and Touch ID, strong encryption, and other benefits that “a physical ID can’t match.”

Support for Apple digital IDs is determined by each state/territory and is opt-in for users.

Apple hasn’t shared exactly which states will launch next. But per the company, this is the short-list that should offer availability “soon”:

In total, we know that Apple has been in talks with at least 30 states about adopting support for its digital IDs with those listed above having committed to the feature.

Apple notes “To help ensure that the person adding the identity card to Wallet is the same person to whom the identity card belongs, the user will be asked to take a selfie and scan the front and back of their driver’s license or state ID card, which will be securely provided to the issuing state for verification.” 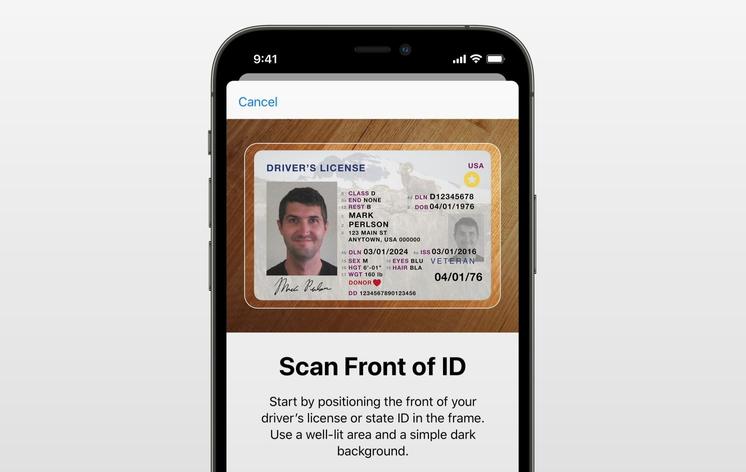 Part of the fraud prevention will include completing “a series of facial and head movements during the setup process.” Apple also highlights that each state is responsible for “verifying and approving the user’s request…”

One of the challenging aspects to all of this is that each state will have its own laws and procedures around how Apple digital IDs can be used and official support will take time to build.

For now, it looks like certain TSA checkpoints at the Phoenix International Airport are the only officially supported places to use Apple digital IDs.

ID cards in Wallet are currently available for use in select states at select TSA checkpoints within Phoenix Sky Harbor International Airport (PHX). Travelers should refer to checkpoint signage to confirm availability.

These will work via NFC reader and users won’t have to hand over their devices to TSA staff.

However, as 9to5Mac reader Robert P pointed out, Arizona will still require drivers to carry their physical driver’s license “at all times” – an Apple digital ID will not be a substitute, at least for now.

Addressing privacy concerns, the Arizona Motor Vehicle Division says that police officers will not take devices. But that soon, “technology will be available for law enforcement to request permission to access your digital driver’s license from a dedicated law enforcement device.”

Right now it’s only for TSA stuff, but eventually the cop will have equipment (an NFC reader) to read the data off your phone or watch when you open the wallet app.

It will work similar to how ‘tap-to-pay’ stuff works. You won’t hand your phone to a cop. pic.twitter.com/a640jXdClC

This brings up the point that government, businesses, etc. will need to build out formal NFC support to accept Apple’s digital IDs to preserve all of the privacy benefits.

However, it’s unknown if we could see places like wireless carriers, banks, and more accept them for proof of identity by checking it visually – instead of or ahead of accepting it with an official NFC device. There’s really no way to know how that will go or how slow adoption could take.

Getting states to officially adopt digital IDs is a big step for Apple, but expect it to take years for them to become widely accepted as an official form of ID.

As governments and businesses do begin to adopt official NFC support for Apple digital IDs, here are how the privacy features work:

Tags:  how to use digital touch on apple watch