While watchOS 8 seems like a light update on the surface, it’s actually indicative of much larger changes that are likely coming down the road. One thing that has become increasingly obvious is that Apple is preparing for greater independence from the iPhone. They’re making several changes both in watchOS 8 and with Apple Watch Series 7 that make using an Apple Watch independently better than ever.

The first and most obvious change is the new keyboard that Apple is introducing on the series 7. This isn’t the first time you’ll be able to type on an Apple Watch, Apple has previously allowed third-party developers to create their own keyboard apps. Unfortunately, they haven’t been allowed to appear in other apps, leading to workarounds in apps like FlickType.

The obvious application of a full QWERTY keyboard on the Watch is for entering passwords, writing longer messages and emails, and completing more complex search queries. With the Watch having been an iPhone accessory, it was never really necessary to have a full keyboard. Dictation and scribble got the job done on the fly, but for Apple Watch to become an independent device, it needs a keyboard for a setup assistant and more powerful apps – be it from Apple or other developers.

The larger displays that enable a really precise QWERTY keyboard will surely enable many other things that can help make the watch more independent.

In watchOS 8 Apple has tweaked a ton of their own apps in very subtle but important ways. The settings app for example has gained the ability to manage an Apple ID. You can now edit your Apple ID contact information, change your password, update Sign In with Apple, manage subscriptions, manage devices, and more. Why anyone would want to do any of these things on a small screen, I don’t know. What I do know is that they are necessary additions to allow the Watch to live independently of iPhone.

Services apps like Photos and Music have received major updates in the latest version of watchOS. Photos not only has an entirely new design, but it acts more like the app on the iPhone more than ever before. It’s not just a locket for precious photos you may want on your wrist anymore. It’s a full-fledged photos client. 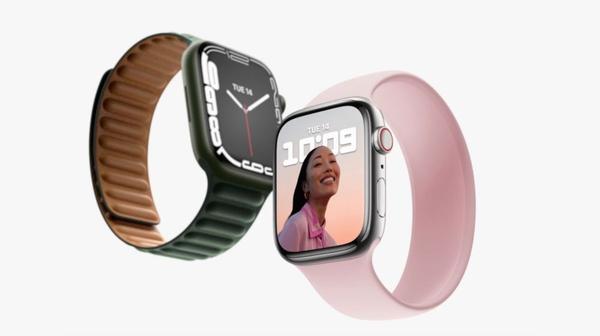 The app has new view modes like the mosaic grid that’s been popularized on iPhone. Photos can also surface memories and highlights. Perhaps the clearest indication of independence is that you can now share photos right from the watch app.

Like photos, music is now effectively a full client for the service. You can even share songs, playlists, albums, and more from your watch via mail and messages.

Home has also received a fairly substantial update this year. With watchOS 8, the Home app works more like it does on an iPhone. Upon launch, you can see an overview of status updates from various HomeKit devices throughout your house. There is also finer tune control over individual rooms, cameras, and other things.

It’s easier to switch between different scenes and the app can even suggest actions for different HomeKit devices based on your use of other ones.

One new app in watchOS 8 is contacts. Contacts have now been set free from the Phone app. Imagine your watch isn’t paired to an iPhone in the future, where should contacts go? Well, it’s highly likely that’s why the contacts app exists.

Find My has been split up into a series of different apps that serve specific purposes. There are now dedicated apps for finding your devices, finding things, and find my friends. You can now see anything and anyone that integrates with the improved Find My network on your wrist.

Tips is by no means a beloved app. Most people likely just delete it from their devices. But when you consider it in the context of iPhone independence it makes a lot of sense. In order to teach new Apple Watch owners how to use their device, Apple ordinarily uses tips on the paired iPhone. Now, with watchOS 8 Apple lets you learn more about your watch right on the watch itself.

While there are currently only 5 iMessage apps on the Apple Watch with watchOS 8, there’s now infrastructure for developers to integrate their apps into the Messages app. One of the main new features of Messages in watchOS 8 is the addition of the GIFs iMessage app that lets you search for and send reaction GIFs. Apple has also included dedicated iMessage apps for Apple Pay Cash, voice recordings, digital touch, and Memoji.

Something that’s not necessarily confirmed but appears to be the case is that watches can more easily jump between connected iPhones. As I’ve heard stories about friends setting up new iPhones, they’ve said that it was impeccably easy to get their watch up and running on their new phones. In fact, they barely had to do anything. With device-to-device transfer, it just worked. If the Watch can jump between connected devices now in a secure and efficient manner then it can likely do so between any device signed in to a particular Apple ID. An independent Apple Watch may want to connect to your Mac or iPad. If it could hop between devices it wouldn’t be an iPhone accessory anymore and it would open up the floodgates for Android users.

Now there are still a few important things missing that I’d wager might show up in watchOS 9, at least for the Series 7 and its larger displays. The first thing that’s missing is Safari. Yeah I know, who wants to browse on their wrist? Well, if you want to make the Watch independent it needs a full web browser. Not one that always defaults to reader view when tapping a link in Messages. The UI has already been designed, it just needs a standalone app. Another thing is a proper password manager. iCloud Keychain is missing from the Watch, so if apps are ever going to allow users to sign into apps on the watch itself this needs to get added.

What do you think about the changes made in watchOS 8? Are you excited for Apple Watch Series 7? Let us know in the comments below!

Tags:  what is digital touch message on apple watch