Does every sport need its own NFL RedZone in the OTT era?

For many viewers, especially those with a love of fantasy football, the National Football League’s (NFL) RedZone is the best way to experience the sport on a Sunday afternoon.

The broadcast shows every single touchdown from 13 matches during two timeslots, moving from stadium to stadium across the US. For anyone who is time poor, has a short attention span, or wants to see how their star fantasy running back is doing, RedZone is the only way to keep up to date without resorting to multiple screens and post-game highlights.

The fact that RedZone switches to the most exciting game at any one moment means viewers have a constant stream of action to sink their teeth into. There’s no risk of being forced to watch a punt-off between two teams that lack attacking prowess and its hopelessly addictive.

This of course leads to criticism that fans are not watching the NFL in the way it was supposed to be viewed – as a 60-minute contest between attacking, defensive and special team units. But there’s no denying the success of RedZone and many within the industry believe it complements, rather than replaces, traditional coverage.

Ever wonder what a day in the life of @ScottHanson is like? 🤔He takes you BEHIND THE SCENES to a #NFLRedZone Sunday! 🏈📺: Episode 200 this Sunday on NFL RedZone Channel pic.twitter.com/1TNyfgS4pO

RedZone predates the mass adoption of direct to consumer (DTC) but in many ways it’s the perfect model for streaming services with huge amounts of content, unconstrained by linear scheduling and an audience that supposedly demands instant gratification.

As the NFL shows, it’s not necessary to have an over-the-top (OTT) platform to deliver the RedZone experience, but it does help. And it’s no wonder that other rights holders are looking to follow its lead as a way of adding value to partners and attracting new audiences.

Since last season, Major League Baseball (MLB) has offered ‘Big Inning’, a RedZone-style service that jumps around from game to game to give viewers a look-in at what’s happening across every ballpark in the US. Given the sheer volume of games that comprise an MLB season, it’s easy to see the appeal.

The service is available on the MLB.TV OTT platform and for the 2022 season will be expanded from weeknights to include weekends as well. What’s more, it will also be made available to AppleTV+ users in the US to complement the two Friday Night Baseball games it recently won the rights to.

But not every sport is an NFL or an MLB. RedZone is backed by significant resources and production values but not every sports property has access to a studio or huge amounts of staff watching every single game.

Without these resources, there’s a danger that these broadcasts simply move from game to game without purpose, meaning viewers don’t get the slow-building tension of a 90-minute game or get to see the key moments. I’ve seen enough German ‘Konferenz’-style broadcasts to confirm this.

But cloud-based workflows and AI technology should lower the barrier to entry. Algorithms powered by computer vision and data analytics can automatically determine which contest is the most exciting and apply context for the viewer. 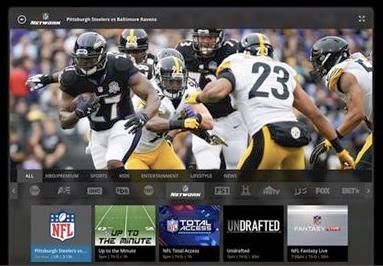 Mobile application Buzzer is going one step further, offering a platform that sends notifications when an exciting live event is about to happen. Buzzer works with existing subscriptions, so perhaps that’s another model for the industry to follow.

Purists may scoff but we live in an era of unprecedented consumer choice and technological advancement. As the shift to OTT continues at pace, can any sport with multiple, simultaneous events afford not to RedZone itself?

The suspension of live sport during the pandemic left a void for many of us. But it wasn’t just the sport we missed – it was the social interaction with our friends, family, and countless strangers in the pub and the stadium.

When competition resumed, broadcasters and sporting bodies did as much as possible to mitigate the impact. Artificial crowd noise was piped in and even fake crowd visuals were added. Hopefully, these innovations won’t be needed for some time, but there is one technology that might be here to stay.

Social viewing allows multiple people to watch an event together remotely at the same time. BT Sport’s Watch Together feature is a good example of this, using Sceenic’s platform to synchronise and distribute live content with multiple video chat feeds.

The relaxation of lockdown restrictions thankfully means we are able to watch sport together whenever or wherever we want, but in an increasingly globalised society, social viewing offers the opportunity to watch events with people the other side of the globe.

Last week, ESPN announced support for ‘SharePlay’, a feature that allows ESPN app users to watch live streams and original content using Apple’s FaceTime video call feature. Sessions can host up to 21 people and participants can even choose audio and subtitles in the language of their choice.

It’s certainly more advanced than my effort to sync up a Skype call with my TV.

As media giants scramble to secure premium live sports rights for their OTT platforms, it can be easy to forget that DTC is just as much an opportunity to serve niche audiences as it is to great mass market propositions.

As a British-born sports fan growing up in Switzerland, I was pretty well-served when it came to following major events like Premier League soccer and Six Nations rugby. Even the World Darts Championships was available on Sport1.

But things like cricket were harder to come by (except for a brief period when Eurosport had ICC rights) and it became a full-time job navigating electronic programming guides to see if the Italian free-to-air sports channel was showing an EFL game that weekend.

These days, it’s far, far easier to get almost anything anywhere thanks to OTT and from personal experience, I always take a keen interest in any platform that serves fans living abroad who would otherwise be unable to watch their favourite events from back home. The launch of the Gaelic Athletic Association (GAA) Go service is one of the best examples, bringing Gaelic football and hurling to the Irish diaspora. But many of these services focus on the domestic market.

Poland’s Ekstraklasa soccer league has been available via various channels and streaming services in the UK in the past, but will now be available in commercial venues thanks to a deal with streaming service Screach. This means large parts of the UK’s estimated 700,000-strong Polish community will be able to watch games together, legally in places like bars, clubs and cafes across the country.

It’s another example of OTT serving a very specific market that would have otherwise been ignored. Now, if the Swiss Ice Hockey Federation is reading this, I’d very much like to watch EV Zug from anywhere in the world.

Want this feature delivered directly to your inbox every other Thursday? Sign up to the SportsPro OTT newsletter here.

Tags:  why won't my apple watch make a phone call