(Pocket-lint) - Casio's journey into the world of smart watches started a good few years ago. From the beginning it went for a different approach, offering a watch with a dual-layer display to extend battery life while always offering the ability to see the time.

While it would have made sense to launch under the G Shock brand first, instead it opted to go with its hiker-focused ProTrek line. But finally Casio has now launched a Wear OS watch in the G-Shock range. So, is it any good?

If someone says the word 'G-Shock', there's a very good chance you have a mental image of a chunky round watch. While it has other styles under the brand, this is arguably the classic G-Shock look.

It's large, round and features those iconic shock absorbers protruding all the way around the display, ensuring that it'll soak up any impact and protecting that watchface.

As is standard for most Wear OS watches, the G-Shock has three physical buttons, all on the right side of the watch, each with its own preset function. The middle, as always, launches the Wear OS app view, listing all installed apps. The top button is your Start button - you press it to launch into an activity. The bottom button launches Casio's own function interface, giving it a little bit of a different edge compared to other Wear OS watches, but we'll get into more of that later.

We weren't particularly convinced by the design of the buttons. They have quite a spongey quality, especially the middle button, so you don't get that reassuring click you might crave, letting you know that you have, indeed, pressed a button. And because the interface on screen doesn't always respond instantly, that is a little jarring to begin with.

The other side of the case features protruding elements that look like they could be buttons, but aren't. The central protrusion is the sensor for altitude/barometric pressure. The bottom is just round plastic with no function. The top one is the external charging port - which is magnetic, and means you charge the watch while it's resting on its side, rather than resting on its underside (the latter being physically impossible thanks to the design of the strap; it literally can't lay flat, since the strap always springs upright).

The strap is a nice change from the Pro-Trek models though. Rather than have a plastic-like, hard feeling material, this strap is far more supple. It's flexible, yet strong, and the double hole-punches spread across most of the length of it give versatility in ensuring it'll fit most wrists.

There's only one loop holding the strap in place though, which we often found would slip down towards the clasp, even with its protruding elements fitting into the strap holes. That means you might need to get used to that strap sticking out a bit at times.

On the underside of the watch is quite a plain metal plate with a small protruding mound, which plays host to the optical sensor for heart-rate monitoring.

The one feeling you do get from the watch design is that it's really sturdy. Not only is it designed to absorb shock, but it's also water-resistant to high levels. It can withstand pressures up to 20 bar, which translates to around 200 metres down. One for the divers, then.

On the whole, this smart G-Shock is generally comfortable to wear, although not quite comfortable enough to want to wear it at night. It is a big, chunky watch after all. And we'd often find we'd want to take it off on hotter days, or after a workout, when we were sweating. At those points, we could definitely feel it was there on our wrist.

Casio has stuck to its guns when it comes to display tech, and we're glad of it. It's different to most other smart watches on the market. You get the full colour display for smartwatch shenanigans, but also a second LCD layer that's on all the time - much like a traditional digital watch.

The result is a watch that lets you see the time, all the time, without draining significant amounts of battery. Other watches tend to use their own OLED-based panel to have an always-on feature, but this method usually means battery life is nowhere near as long-lasting as it could be.

It's also much easier to see the Casio's time display when outdoors in bright daylight. The primary screen isn't so good in that instance, though, as it seems a relatively low contrast and low brightness panel. It's a TFT-based LCD panel, which explains why.

It's a customisable experience to a degree as well. The secondary monochrome LCD can either have a black background and white digits, or a white background and black digits. With the main colour display, Casio will let you choose from three styles: digital, analogue and dual layer. The last of these essentially mimics the look of the monochrome digital panel on the main screen, so the appearance is that it seamlessly wakes up. Of course, there's a plethora of third-party options available to download from the store. 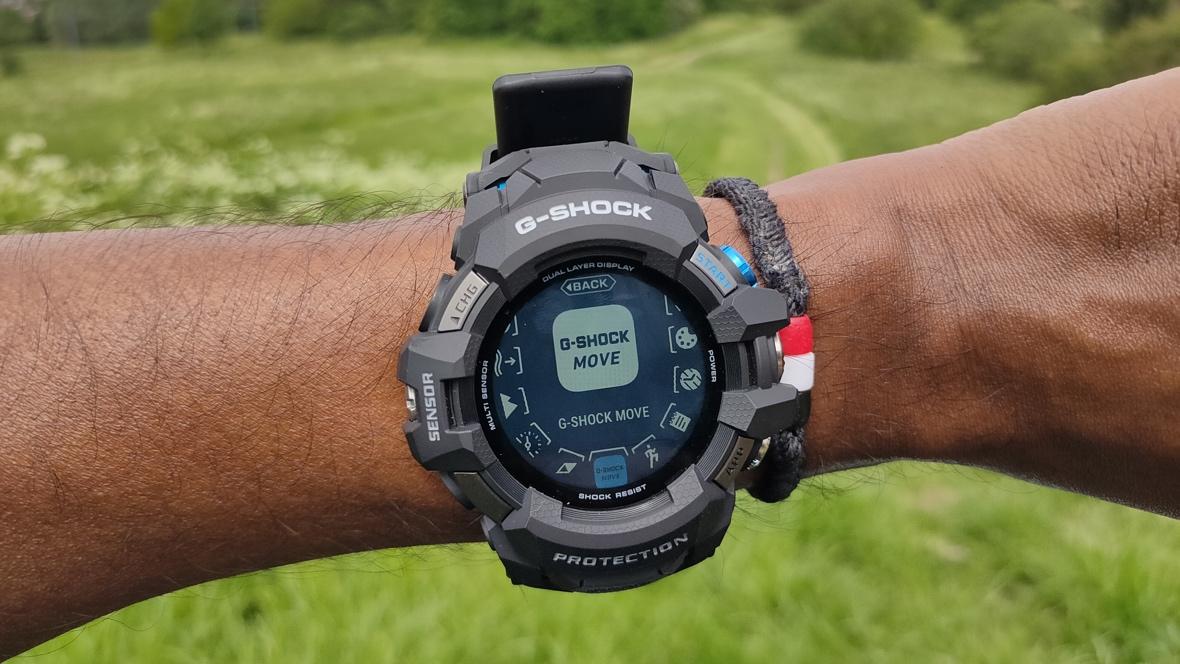 As for the interface on the screen, for the most part it's the same as any Wear OS watch. Swiping left gets you to your widgets for info such as the weather and fitness tracking. Swiping right gets you to Google's Snapshot view for a quick glance at any important info. Swiping up is for notifications. Swiping down takes you to quick settings.

Where Casio differs from others is in offering a 'Casio App'. Launching this - by pressing the bottom button - delivers get a bespoke interface that lets you launch features like your activity tracking history and details of your runs/sessions. Here you can also customise the style of the watchfaces, quickly launch the heart rate scanner or into the 'Timepiece' mode.

The G-Shock Move was the first Casio watch to offer a fitness focused app for connected smartphones. But when it first came out it was limited to say the least. Good for runners and no one else.

Now the app supports more activities, which are also built into the watch, so you can track more than just your running sessions. It'll handle cycling, biking, stand-up paddle boarding, and even fishing, among others.

That said, we're frequent runners, so naturally that's what we used it to record. And generally speaking, the tracking was pretty accurate.

We took it for runs alongside our daily Garmin Fenix 6 just to see how the two compared, and when it came to distance, cadence, pace and elevation, the two yielded very similar results. As one example on a long easy run, over 11km, the two watches were only about 50m apart in distance. Similarly, there was a metre difference in elevation, and only a couple of seconds per kilometre difference when it came to calculated pace.

It was only in the presentation of data during the run we have any real complaints. Instead of showing the distance travelled as the main graphic, or at least one of them, it shows you the time, pace, and heart-rate - without any way to customise that.

Once back from a run it's easy enough to sync with the smartphone app, although we regularly had issues with connecting, and had to switch Bluetooth off and on again to reconnect in order to sync.

One plus point here, however, is that you can link the Casio Move app to Google Fit and Strava if you want, so that your running data is stored in cross platform apps and services, you're not just locked into Casio's system.

All the details on the next version of the Apple Watch operating system, watchOS 7.

That's one benefit of being a Wear OS watch too. You can, for instance, decide to download Strava (or other third-party apps) directly to the watch and use that to track your runs, without needing Casio's system at all.

The one glaring omission for a Google-powered watch, however, is GPay. There's no contactless payment of any kind because the Casio doesn't have NFC.

It does, however, have an interesting capability called Sensor Overlay. This records the data on your watch and is able to turn it into a graphic which you can use on top of video or photos of the activity.

For a Wear OS watch, battery life is decent too. Again, that's thanks to that dual-layer display. Rather than barely scrape through two days, the G-Shock manages three quite comfortably.

During activity, we noticed a 90 min outdoor session with heart rate and GPS that it lost something like 18 per cent battery. Roughly estimating with rounding up, that suggests around 450mins, or seven hours total for live tracking.

With a full battery, that's likely enough for most activities, even a long hike up a mountain, and more than enough for even the slowest competitors to complete a marathon.

So who's this for? Put simply, it's for G-Shock fans who want to get in on the smartwatch market. Plus, it's a decent watch for tracking activities like running and walking. It doesn't do some of the Wear OS things all that well - for instance animations and response are a little slow and laggy - plus the main display is quite small and lacking in vibrancy. But it still does what it sets out to do.

Most of the time - thanks to that secondary digital screen - it feels just like using a proper digital G-Shock, but its hiding its smarts underneath, giving you that extra flexibility to get smartphone notifications, reply to messages, and track your everyday fitness.

It's not the cheapest watch in the world, but for the first time it's a proper smart G-Shock - and that may be all it ever needs to be.

If being a G-Shock or a 'proper' smartwatch isn't the big draw here, but you want a fantastic watch for sports and activity tracking, there aren't many as accomplished as the Fenix 6 series from Garmin. Plus, the battery life is much longer-lasting and it handles mobile payments.