BLUETTI Announces NA300, the First Solar Generator with a Sodium-Ion Battery—Here's What You Can Expect

Solar generators are generally powered by chemical lithium-ion batteries, which have been hailed as the king of energy density and known for their low lifecycle costs as renewable energy storage. While it's advantageous, it also has a few setbacks.

To stay true to their promise to create a sustainable future, BLUETTI rolls out their first solar generator powered by sodium-ion batteries.

Are Solar Powered Generators Any Good?

A solar powered generator is best used as an alternative energy source when the electrical power is down. You can use it to charge your devices and a few small appliances. But with some heavy-duty solar generators, you can also power up large residential and industrial appliances with ease.

Most solar generator users utilize it as a great source of backup electricity for boating or RV camping because of its portability and its usage of clean fuel.

Needless to say, solar powered generators are good-best even-because aside from solar generation accounting for natural resources, it is also amicable for all types of situations.

In other words, you can choose to have a solar generator for your homes or when you are outdoors.

BLUETTI's EP500 Pro is the predecessor of the NA300, with appearance and styles that were seamlessly inherited. Moreover, the sodium-ion solar generator comprises four 20A plugs and one 20A L14-30 output port. These ports are driven by an integrated 3,000W pure sine wave inverter to run electrical appliances smoothly. 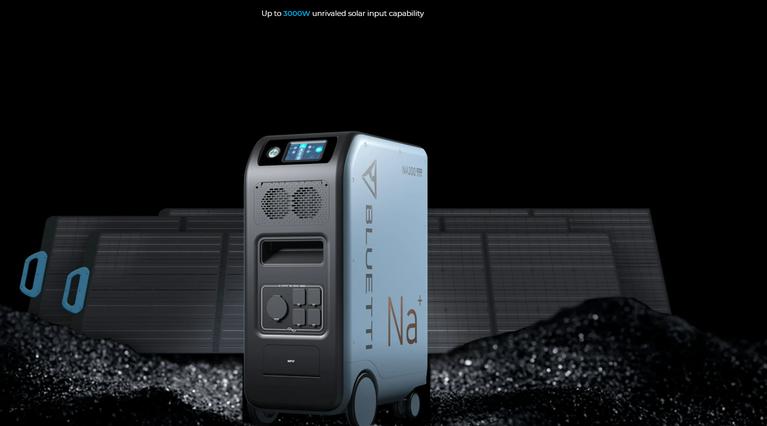 But most importantly, the NA300 features a fast-charging quality, wherein you can recharge it from 0% up to 80% within a mere half of an hour through 6,000W swift AC+PV dual charging accounting for 3,000W max for both AC and PV.

On the other hand, however, its predecessor contains a capacity of 5,100Wh, while the NA300 only has a 3,000Wh. But when compared, both solar powered generators boast the same size. The only difference is the sodium-ion battery responsible for reducing the watt-hour with its limitations.

The NA300 also includes the 240V, 6000W connection with a Fusion Box and another NA300, IoT App Remote Control by iOS or Android, and other unique features of EP500 Pro.

Advantages of the Sodium-Ion Battery

The solar generator with the sodium-ion battery can also sustain a constant supply of electricity for your family for a longer time than those with a chemical lithium-ion battery.

To be specific, you can power up your home with NA300 for several days and even for a week. This makes the solar powered generator useful in times of grid failures and natural disasters by recharging it even with just the use of solar panels.

Moreover, the sodium-ion battery battles with the LiFePO4 battery cells, powering up most BLUETTI products in terms of security and long-lasting duration, except for the low energy density.

The competitive advantage of the sodium-ion battery is that it excels when it comes to costs, making it economically friendly. It also has a low-temperature performance, quick charging, plus other beneficial electrochemical aspects, thanks to its chemical characteristics.

BLUETTI's sodium-ion battery can charge solar generators in less than 30 minutes to 80% SOC at room temperature.

Furthermore, in a low-temperature environment of -20°C (-4°F), the world's first sodium-ion battery pack in NA300 solar power with a B480 battery pack gives a capacity retention rate of more than 85%.

Plus, it has a system integration efficiency of more than 80%, which allows the system to run all year round, even in winter or in regions with extremely low temperatures.

Solar generators are worth it because they offer renewable energy. You won't have to use traditional electricity to power up your devices and appliances. Not only can you help lessen the impact of climate change, but you can also access a more convenient source of energy.

With NA300, you can maximize your effort into contributing to a sustainable environment. Although chemical lithium-ion is topping the list of the best battery cells, its setbacks call for another downside that could potentially put you at risk.

With NA300's sodium-ion battery, your solar powered generator can run appliances and devices more safely, with features that make it far more superior than the other.

What Can You Power Up With Bluetti?

With BLUETTI's solar generator like the NA300, you can power up your home appliances and devices should you experience a total blackout due to electrical issues or disasters. If you plan to go off the grid, they also have portable solar powered generators to accompany you, so you won't have to stop over various charging stations.

Now, with the heavy-duty solar generators BLUETTI has to offer, not only can you run home appliances, but medical appliances, too. To conclude, you can power up everything with BLUETTI's solar powered generators.

The NA300 can do all of it, so watch out for its debut in CES 2022. BLUETTI will also unveil new products holding new power solutions to build a sustainable future for you! Stay tuned for this one, and make sure to be on the lookout for further updates only on BLUETTI's official website.

Tags:  how to connect itech fusion watch to phone