Value means different things to different people, but whatever your definition it's hard to argue with a brand new iPhone in 2022 for just $429. That's the promise from the new iPhone SE (3rd generation), Apple's third outing for what has proved to be a winning formula, and now upgraded with a newer chipset, 5G support, and improved camera and battery performance.

At a time when four-figure smartphones — from Apple included — aren't the exception but the norm, the iPhone SE feels like a strategy shift. It's not so much that cheap phones are unusual, but that the array of compromises involved in hitting a budget price tag generally add up to a lackluster experience. Apple isn't immune to making compromises, but it's where the new iPhone SE places its priorities that set it apart from most rivals.

Your $429 gets you a phone with 64GB of storage, in your choice of Midnight black, Starlight white, or (PRODUCT)RED finishes. A 128GB version is $479, while you get 256GB of storage in the most expensive $579 configuration. You can keep using the same cases and other accessories you might've had for the previous iPhone SE, since outwardly it's basically unchanged.

Apple always devotes some keynote time to its new products' green credentials, but nothing quite matches the iPhone SE for recycling. It's another showing of the same physical design we saw used for the iPhone 8 back in 2017 (itself not all that distant from the iPhone 7 before it), with a familiar 4.7-inch display on the front, a glass back, and a metal chassis sandwiched between.

That frees up more budget to spend on what's inside, of course, and so the pre-notch looks are paired with the same A15 Bionic chip that powers the latest iPhone 13. It's a recipe — flagship processor with borrowed style — that rivals relying on third-party chipsets can't seem to make the numbers work out on. In the Android world, smaller and cheaper invariably means slower, too, but that's just not the case for the iPhone SE.

The compromises here do leave the new iPhone SE feeling even more of an outlier among the rest of Apple's smartphone range. As well as the 4.7-inch LCD panel there's a Touch ID home button and a single camera on the rear. Every time I pick the iPhone SE up and the display turns on, I'm surprised at how much unused fascia space there is above and below it.

Solid screen pales next to OLED

The Retina screen itself is fine, though far from cutting-edge at this point. Its 326 ppl resolution is adequate for a display of this size, and you get True Tone to automatically temperature-match to the ambient lighting. It's one of those things that, once you've lived with, you don't want to give up.

Still, compare it side-by-side with the HDR-capable OLED on the iPhone 13 Series, and you might start contemplating a $699 iPhone 13 mini instead. The newer displays are more colorful and have much better contrast, with deeper blacks and improved brightness. Indoors, the iPhone SE's 600 nits is alright, but outdoors I missed the 800-1200 nits of the OLED panel. 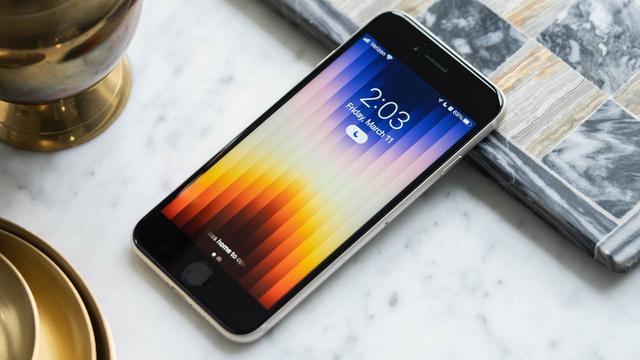 Touch ID, the fingerprint sensor built into the home button, still has its legion of fans, and I can understand their affection. The ability to unlock Face ID-equipped iPhones while wearing a mask has only just been added in iOS 15.4 — unless you also had an Apple Watch, and even then that could be glitchy at times — so relying on your fingertip instead has plenty of appeal. I just wish Apple could include the sensor into the power button, as it does on the (admittedly larger) button on the iPad Air.

Like with the 2022 iPad Air, this 3rd generation iPhone SE also gains 5G support for the first time, though it's not quite the same implementation as in the iPhone 13 or iPad Pro. What you do get is Sub-6 GHz support, the generally-faster-than-LTE networks which are predominant in the US and elsewhere at the moment. Absent, however, is mmWave 5G support: that can be markedly faster, on the assumption that you can actually find service.

It's that practical limitation which means the iPhone SE's partial embrace of 5G isn't all that much of a headache in practice. Sure, if you live in select cities where select US carriers offer mmWave 5G, its absence may rankle, but for most people opportunities to connect to those networks are few and far between. I'm much happier to see WiFi 6 support, for example, and there's a lot to be said for how Apple smooths the Bluetooth connectivity process with its AirPods earbuds and other accessories.

On the back, there's a single 12-megapixel camera. No ultra-wide and no optical zoom, but you do get optical image stabilization, Apple's Deep Fusion and Smart HDR 4 computational photography, and Portrait mode. For 2022, it's the software smarts — enabled by the new chipset — that seem to be doing the heavy lifting in terms of improvements.

The results have to be pushing the limitation of Apple's sensor and are unexpectedly good even compared to what an iPhone 13 Pro Max can produce in the same situation. I'm particularly impressed by how well the new iPhone SE handles scenes with extremes of lighting, such as when objects are backlit by the sun. That can easily blow out details in the foreground on lesser cameras, but Apple's HDR processing handles it nicely.

You definitely don't get the full experience found elsewhere in the iPhone line-up, mind. Portrait mode, for instance, will work with people and pets, but not for inanimate objects. There's no Night mode, either, the low-light enhancing setting that can pull out impressive levels of detail. While the iPhone SE can shoot up to 4K video with stabilization, the clever — but maybe gimmicky — Cinematic mode that the iPhone 13 Series offers is absent.

Longevity is the key

Overall, though, it's hard not to see the biggest draw of the iPhone SE being its chipset. iOS on Apple's cutting-edge silicon simply flies, but it's the reassurance that buyers can be assured of many years of software updates to come that has real budget implications.

Take, for example, iOS 15, currently supported on models as old as the iPhone 6S: that phone launched in 2015. Apple doesn't make any explicit commitments for how long it'll keep pushing out updates to older smartphones, but it definitely has a track record of keeping them upgraded for far longer than its Android-making counterparts do. That's even more impressive when you consider that cheaper Android phones still often have just two to three years of promised updates.

The other age factor to consider with phones is battery life, of course. Again, Apple is combining hardware and software changes for its 2022 budget hero: a slightly larger battery paired with the efficiency improvements of the A15 Bionic. There's Qi wireless charging — though not MagSafe, so the iPhone SE won't cling to a charging pad — along with fast wired charging. You'll need to supply your own 20W charger for that, mind, since Apple only includes a USB-C to Lightning cable in the box.

The promise is up to 15 hours of playback or, more generally, 1-2 days of average use. That's based, I suspect, on people who wouldn't be considered smartphone addicts. As my daily driver, the new iPhone SE fell short of the iPhone 13 mini, making it into the evening but no longer. I'm probably more demanding than most, however. Looking further ahead, meanwhile, Apple will replace an iPhone SE (3rd generation) battery for $49, if it's out of warranty or AppleCare+ coverage.

A budget phone with admirable focus

That's $20 less than you'd pay to replace an iPhone 13 mini battery, but I'd still suggest it's worth cross-shopping for those who want to stick in the Apple ecosystem. Yes, the cheapest iPhone 13 mini (with 128GB of storage) is $220 more than the iPhone SE 128GB, but you get a bigger, nicer OLED screen, an ultra-wide camera, proper MagSafe, mmWave 5G support, and better battery life. They're benefits worth considering.

If you're feeling platform-flexible, meanwhile, a Pixel 5a with 5G starts at $449, has dual rear cameras, a considerably bigger screen, and Google's latest computational photography which is definitely impressive. On the flip side, it doesn't feel as nice as the iPhone SE, there's no wireless charging, and you'll have to be okay with Android.

The iOS fan on a budget but unwilling to consider a refurbished iPhone, then, should probably stick to the 64GB or 128GB versions of the new iPhone SE. Anything more expensive, and the delta in price between that and the iPhone 13 mini is too little for it not to be worth taking the leap. It's also worth checking what carrier promotions are on offer, since most of the US networks are heavily pushing the iPhone 13 series right now.

That's no slight to the iPhone SE (3rd generation), mind. Apple's cheapest new iPhone continues to perform where it matters the most: the reassurance that the budget smartphone you buy today hasn't traded longevity for lower pricing. The recipe Apple opts for to achieve all that is starting to show its age, but there's no denying that the end result is still a relative bargain in the segment.

Tags:  can an apple watch be paired with 2 phones